On a rainy Thursday evening I ventured out to St Paul’s, Covent Garden http://www.actorschurch.org/ , known as ‘The Actor’s Church’. The church was designed by Inigo Jones and the original building dates back to 1633, although successive ‘restorations’ have left a rather unlovely interior. Despite that, it is clearly a site beloved by the theatrical world. The walls are adorned with memorial plaques to members of the troupe, from lighting designers and producers to actors and ballerinas – including Charlie Chaplin, Noel Coward and Robert Helpman. The most touching are perhaps those to actors no-one otherwise remembers, with epitaphs such as “A superb player of minor roles”. Indeed, tomorrow another theatrical funeral is to take place at St Paul’s – that of Jessica James, described as “Leading lady for Ivor Novello’s company ‘The Dancing Years’.”
The church is right in the middle of Covent Garden, and one facade faces the piazza where street entertainers perform. The entrance is, however, around the corner, fronting the old churchyard and a garden square.
And why was I at St Paul’s on a Thursday evening? To hear a performance of Handel’s ‘Messiah’ – that perennial favourite of the Christmas Season. Handel wrote his ‘Messiah’ in 1741 when he was 56 years old (and St. Paul’s was 107). In April of that year, depressed and drowning in debt, he gave what he feared might be his farewell public performance. A few months later, however, the 3rd Duke of Devonshire commissioned him to compose a new work for a benefit performance in Dublin. Handel immediately set to work and began setting a libretto of Charles Jennens, made up of texts from the King James and Great Bibles.
It is said that Handel worked at tremendous speed and became utterly absorbed in the work, rarely leaving his room and not stopping to eat. In just 24 days he composed the three section of the 'Messiah', with orchestrations, in a manuscript of 260 pages. The oratorio premiered in Dublin on 13 April 1742, with Handel leading from the harpsichord, and was staged in London the following year. It remains one of the most enduringly popular and well-known pieces in the entire classical music canon. Especially around this time of the year.
The 'Messiah' is usually performed with a great massed choir, their song-sheets in hand, and a big orchestra. The one I went to see was entirely different – it was performed by a string quartet and a cast of 17 singers, costumed and staged, in the intimate space of St Paul’s, its altar providing the set. The company which presented it is called 'Merry Opera' and is performing this fascinating version of the 'Messiah' in half a dozen historic churches around London in the lead-up to Christmas.
Here’s how it worked: the setting is war-torn mainland Europe where, on Christmas Eve 1940, a community seeks sanctuary from the enemy in a church. The action unfolds over three days. With rather lovely ‘forties hairstyles and evocative clothing, each of the singers projects a characterisation. We see the welcoming reverend, a mother who has lost a baby, two sisters reunited, a girl who appears to have been raped, eventually an enemy soldier is captured (and released), and a young husband dies of his wounds.
This means that we encounter some unusual confluences: for example “He was despised" doesn’t refer to the dying Christ, but rather is sung about the captured enemy soldier. "Why do the nations so furiously rage together" was, however, entirely appropriate. I found the interpretation entirely absorbing and extremely clever. 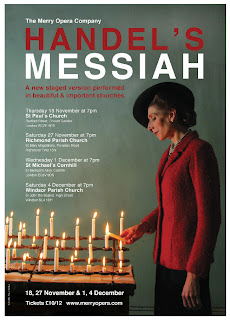 The performance was brilliantly directed. The acting was superb and within moments we were transported to a small European church. Oh – that’s right – we were sitting in a small European church. That may have helped. The fear and nervousness of the characters was wonderfully done, and the music was made exceptionally moving when applied to a real life situation. We were a long way from the manger in Bethlehem, but very close to the themes of hope, sacrifice and redemption. The singing was let down by one or two performers, but others were exceptional. They audience was small – maybe 50 people – and I managed a front-row pew. It is always a marvellous thing to be close to live opera singers giving forth in full force. We were given a glass of wine at interval, to ward off the chill of the church (I sat through the second half in my overcoat).
This was an excellent thing to see and hear; but if I fancy the more traditional 'Messiah', there are plenty to chose from coming up across London in the next weeks. The Royal Albert Hall, for example, is offering the Royal Philharmonic Orchestra with 500 massed voices. I expect everyone will stand for the "Hallelujah Chorus" there. We sat sombrely in St Paul’s – the story line didn’t seem to call for standing, though the famous Chorus was beautifully and movingly sung.
As a footnote to this, while I was looking around the web on this topic, I discovered a site called 'The Mystery Worshipper' which you might enjoy checking out. You've heard of Mystery Shoppers? Apparently volunteer Mystery Worshippers attend services hither and thither, and then add their reports to the website:
Since ancient times (ok, 1998), Ship of Fools has been sending Mystery Worshippers to churches       worldwide. Travelling incognito, they ask those questions which go to the heart of church life: How long was the sermon? How hard the pew? How cold was the coffee? How warm the welcome? The only clue they have been there at all is the Mystery Worshipper calling card, dropped discreetly into the collection plate.
Here's one of their entries for St Paul's Covent Garden.

It took me ages to find a 'Messiah' clip to share with you, and this is not the greatest quality, but what  lovely voice for the moving aria 'He was despised'.
Notes on Handel and the production from the Merry Opera program.
Images from:
http://www.ship-of-fools.com/mystery/2006/1292.html
http://www.clsw.org.uk/
http://dansindel.wordpress.com/2006/12/
Posted by Annette Freeman at 11:47 PM