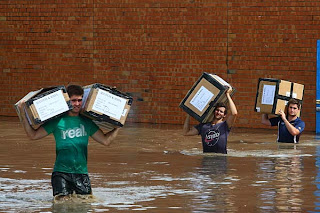 There is only one subject that I can write about today. I am sure that at home there is only one subject dominating everyone's thoughts and conversations - the terrible flooding that has inundated Queensland and parts of Northern New South Wales. There isn't very much I can add, from my garret here in merely-drizzly London, to the deluge of news stories that has been keeping pace with the deluge of rain.

At this stage, with the waters yet to peak in Brisbane and a trail of destruction and loss of life behind the wall of water, Australians must be asking themselves if they still agree with Dorothea Mackellar, the young 'bush poet' who wrote the iconic verses in 1904 when she was 19 years old, living in London, and feeling homesick. Not that I'm drawing any parallels here...

The recent rains broke an equally dreadful ten year drought. Dorothea refers to both drought and floods in her paen to Australia, in the verse that most Australian school children - at least until my generation - were taught to repeat:


I love a sunburnt country,

A land of sweeping plains,

Of droughts and flooding rains.

When news of the floods in outback and northern Queensland first began to reach the news, I was fairly relaxed - at last the dreadful drought, so devastating to so many rural families, had broken. I read comments from farmers saying things like 'we really needed a good flood'. As Dorothea put it:


Core of my heart, my country!

When sick at heart, around us,

We see the cattle die-

But then the grey clouds gather,

And we can bless again

The drumming of an army,

Friends in Europe asked how things were going, since there were reports of an area 'as big as France and Germany combined' being under flood. But also reports that 'hundreds' had been evacuated, prompting one Europe-based friend to comment that it must be a fairly sparsely populated area. In the early days, this was true. Small communities and remote farms were affected, but coping. The papers carried photos of country pubs with water to the windowsills, and happy patrons still drinking their beer. This was not so much a flood as a broken drought.

Then the waters began to reach the coastal plain and the more populated areas. Things began to seem more serious, but at least no lives had been lost. Now, a week or so later, not only have the waters devastated inland cities like Towoomba, causing loss of life, they have even reached the state capital Brisbane, a city of two million people. Roads are cut, electricity is out in many areas, anywhere near a river is under threat, and the flood waters may not yet have peaked in the Brisbane CBD. Over 70 people are missing. Twelve lives have been lost, and tragic stories are emerging. The latest news can be read on Sydney Morning Herald online (the source of images used here).

On a personal note, my parents are out there somewhere, on high ground, I hope. The news is that they are not near a river or threatened area (about an hour north of Brisbane), although the roads around them are blocked or impassable, so it is a good thing they stocked up on food a few days ago. I have heard with relief that they do have an electricity supply.

Today I saw television images of the floods while I was at the gym (being television-less at home, this was the first I had seen). As we watched in awe, Dan said to me 'what caused this?' I looked at him. 'Rain.' True, but perhaps not the whole story. Meteorologists are blaming La Niña weather patterns (check this report). 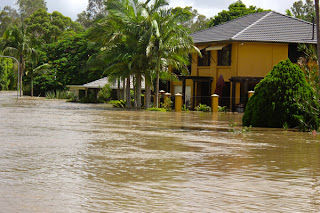 I've just checked the latest news from the Courier Mail, Brisbane's main newspaper, and it is cautiously reporting that the worst may have past:


Police said the river had peaked early this morning but the Bureau of Meteorology was more cautious, saying only that it was holding steady at 4.45 metres at 6.30am (AEST) in the CBD...Queensland Premier Anna Bligh said authorities remained on high alert despite the Brisbane River peaking lower than anticipated. "There is still a very dangerous situation and we have thousands of people who are waking this morning to the total devastation of either their home, their businesses," she told ABC Radio."This is still a very anxious time." Blue sky, no rain, and slightly lower river levels was some "good news after a lot of time without it".

My Facebook friends have been posting news stories and links to support pages and donation sites.Here are a few:

It won't mean much to Brisbane residents, as they wait weeks to return to houses wrecked by water and mud, but Dorothea reminds us that rain means the end of drought:


For flood and fire and famine,

She pays us back threefold-

Over the thirsty paddocks,

Watch, after many days,

The filmy veil of greenness

That thickens as we gaze.

We might also pause to be grateful that Australia is a favoured country that has the resources to respond in crises like this. In recent days, while the rain has been coming down in Queensland, more than 230 people have died in towns near Rio de Janeiro as heavy rains continue to cause flooding and mudslides in south-eastern Brazil. BBC News


Sentimental as she may be, I'll leave the final words to Dorothea, and send good wishes to all those affected by the Queensland floods. 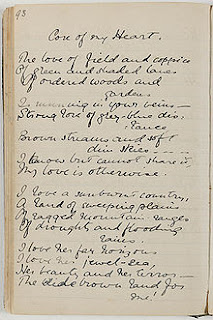 All you who have not loved her,

You will not understand-

Though earth holds many splendours,

Wherever I may die,

I know to what brown country

My homing thoughts will fly.

Posted by Annette Freeman at 11:27 PM