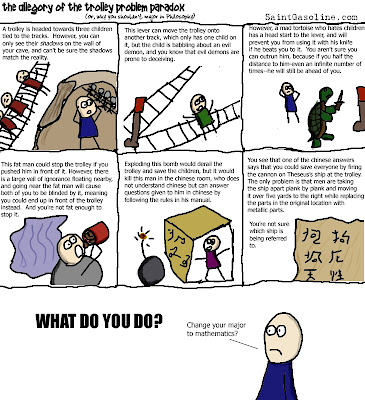 Click here for larger version
After four months of an expensive London-based philosophical education, I am pleased to advise that I can now identify all of the allusions in this excellent cartoon, as well as empathising with the author of it. I hope it raised a chuckle amongst you blog readers. For those unfamiliar with Philosophy and its foibles, here's a brief summary of the philosophical difficulties alluded to in the cartoon:

This thought-experiment problem was devised by the (recently deceased and much missed) philosopher Philippa Foot (1920 - 2010), and expanded upon by Judith Jarvis Thomson. It is in the field of Ethics (we at Birkbeck discussed it in Term One), and also crops up in Cognitive Science. It is very famous and you have probably heard of it. Here's the gist:

A trolley is running out of control down a track. In its path are five people who have been tied to the track by a mad philosopher. Fortunately, you could flip a switch, which will lead the trolley down a different track to safety. Unfortunately, there is a single person tied to that track. Should you flip the switch or do nothing?

J J Thomson proposed a wrinkle to the problem:


As before, a trolley is hurtling down a track towards five people. You are on a bridge under which it will pass, and you can stop it by dropping a heavy weight in front of it. As it happens, there is a very fat man next to you - your only way to stop the trolley is to push him over the bridge and onto the track, killing him to save five. Should you proceed?

The fat man seems to cause all kinds of different reactions. I won't go into the details, but the problems is a test for Utilitarian philosophy, which looks so benign on the surface: the greatest good for the greatest number.


This analogy comes from Plato's 'Republic' and is one of my favourites. Plato has Socrates tell a story of people in a cave who are tied hand and foot, with their heads and thus their viewpoint immobilised so that they can only look at the back wall of a cave. On that wall are shadows thrown by a variety of objects carried in front of a fire behind them (by unspecified puppet-operators). The things throwing the shadows are themselves only puppets or statues. The people think that the shadows are reality. Plato says that 'we are like those people'. For someone in 2500 BC who had never heard of CNN, I think he was pretty prescient. But then I'm a Plato fan. As regular blog readers may have gathered.

This is a reference to Rene Descartes (1596 - 1650) , French philosopher of the Early Modern era (I am studying him at the moment). His big breakthrough was to proposes that to investigate what we can know, we should doubt everything except that of which we have a 'clear and distinct perception'. His method was to doubt everything, except that of which he could be absolutely certain, and that was only one thing: that he was thinking. Thus his most famous saying: cognito ergo sum ('I think, therefore I am'). In the course of working through his doubting method, he pointed out that (1) ours senses often deceives us (e.g. the sun looks to us like it is a small ball when in reality it is huge); (2) we could just be dreaming everything; and (3) how do we know that an evil demon has not deceived us into thinking that everything we see is real? This is the ultimate sceptical argument. You may be glad to know that Descartes overcame it.

Zeno was a pre-Socratic philosopher whom we know from fragments and references from others (including Plato - Term One). His big thing was paradoxes. It is said that he was an admirer of Parmenides, and devised his paradoxes to support Parmenides' doctrine that "all is one" and that, contrary to the evidence of our senses, the belief in plurality and change is mistaken, and in particular that motion is nothing but an illusion.


Zeno came up with the same paradox involving an arrow in flight....which could never reach its target.


The Veil of Ignorance


This is a more modern reference, from John Rawls, the great American political philosopher (covered in Term One). It is a method of determining the morality of a certain issue (e.g. slavery) based upon the following principle: imagine that societal roles were completely re-fashioned and redistributed, and that from behind the veil of ignorance, one does not know what role they will be reassigned. Only then can one truly consider the morality of an issue. For example, whites in the Southern United States, pre-Civil War, did indeed condone slavery, but they most likely would not have done so had there been a re-fashioning of society so that they would not know whether they would be the ones enslaved. In the imaginary society, one might or might not be intelligent, rich, or born into a preferred class. Since one may occupy any position in the society once the veil is lifted, this theory encourages thinking about society from the perspective of all members.


John Searle, an American philosopher currently at Berkeley, devised this thought experiment against the possibility of true artificial intelligence. Someone who knows only English sits alone in a room following English instructions for manipulating strings of Chinese characters, such that to those outside the room it appears as if someone in the room understands Chinese. The argument is intended to show that while suitably programmed computers may appear to converse in natural language, they are not capable of understanding language, even in principle. Searle argues that the thought experiment shows the fact that computers merely use syntactic rules to manipulate symbol strings, but have no understanding of meaning or semantics.


The ship wherein Theseus and the youth of Athens returned [from Crete] had thirty oars, and was preserved by the Athenians down even to the time of Demetrius Phalereus, for they took away the old planks as they decayed, putting in new and stronger timber in their place, insomuch that this ship became a standing example among the philosophers, for the logical question of things that grow; one side holding that the ship remained the same, and the other contending that it was not the same.
—Plutarch, Theseus

So if Theseus's ship is replaced plank by plank, is it still Theseus's ship? What about if the old planks were taken away and gradually assembled into ship somewhere inland, made of all the original materials? Which would have the better claim to be Theseus's original ship?


As I am sure you will agree, there is plenty to keep philosophers busy.

Posted by Annette Freeman at 8:46 PM