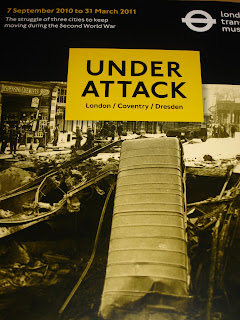 You can’t be in London for long before something or other reminds you of The Blitz – the intense bombing suffered by London, and many other parts of the United Kingdom, during WWII. The London Transport Museum   presently has an exhibition on called ‘Under Attack’, which documents the use of the London Tube tunnels as air raid shelters and the role played by the transport industry in the war, and contrasts the experiences of London, Coventry and Dresden, all of which were bombed to smithereens.
‘The Blitz’ can refer to the bombing campaign against England through the whole war, but often refers to the bombing of London in 1940-41, which saw around 32,000 Londoners killed, many others injured and millions homeless.  But even in 1944-45, V-2 rockets fired at London killed over 2,750 people and injured many more. In one night in November 1941, 515 bombers attacked Coventry, reducing its Gothic cathedral, St Michael’s, to ruins and killing 600 people. They are the ghastly statistics. The exhibition also lets us in on some of the human stories.
England wasn’t taken by surprise by the WWII bombing. Around 1,500 people had lost their lives to bombing in WWI (some of it from Zeppelins), and fear of bombing strikes fuelled the peace movement before WWII. Once Germany announced in 1935 that it possessed an air force (in violation of the Versailles Treaty), England began taking precautions. They were, militarily, sadly pitiful. At first with little or no radar, the early warning of bombers approaching was reliant on human lookouts using their eyes and what they had learnt about recognising enemy aircraft from manuals. At night, searchlights scanned the skies to help the lookouts.
The anti-aircraft guns usually failed to bring down more than one or two of hundreds of bombers filling the skies (at least until later in the war when they got some radar detectors). Their fire – directed skywards in blind hope – was most useful in keeping the bombers higher or sending them off course. And I found out what barrage balloons do – tethered to the ground, they merely interfere with the bombers’ flight paths, again hopefully forcing them to fly higher (the balloons were booby-trapped, so the bombers didn’t want to hit them). By the middle of 1940, there were 1,400 balloons over England, a third of them over London – often operated by the women of the WAAF.
Imagine what it was like to be living in London then. First, there would have been the unmistakable wail of the air-raid siren, a sound most of us would still recognise, even though we may never have experienced a bombing raid. Then there was the blackout, stringently enforced by the Air Raid Wardens. Every night, with the wail of sirens and the drone of the oncoming bombers, you had to scramble to your shelter in the pitch dark. In fact, moonlit nights were feared, because that allowed the bombers greater precision, as they followed the silver ribbon of the Thames to their targets.
And the shelters – even before war had been declared, the authorities were distributing ‘Anderson shelters’ to communities. These were pre-fab, above ground shelters made of corrugated iron. They were embedded three or four feet in the ground, erected, and covered with earth (where you also grew vegetables, if you could). Some above-ground, brick-built structures were also used, and also any crypts, basements, caves – and the tunnels of the Underground in London. At first the authorities wanted to avoid this, but in September 1940 a minor revolt by the populace outside Liverpool Street saw them give in. Things were haphazard down there at first. The trains were all still running, so the shelterers had to leave room for people embarking and disembarking from the trains. There were, of course, no sanitary facilities, so a ‘pong’ soon developed. Gradually some Tube stations worked out some orderly procedures, with tickets being issued for a spot, and in some cases rough bunks being erected. Remember – this went on night after night for months. At the height of The Blitz, the underground accommodated 177,000 people – but this was only 4% of the population of the city. One gentleman, interviewed on a film shown in the exhibition, who was in the Tube tunnel shelters as a child, explained that you never knew if you would be there tomorrow. He said it was so horrible down there, that you really wondered if everyone could hold out. Nearly anything would be better. At Bethnal Green Tube, there was a terrible tragedy, with about 130 people dying in a great crush to get into the station. The press was permitted to report this, but not the name of the station. 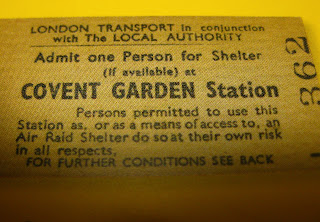 Just a few days after Christmas in 1940, one of the biggest raids came in across London, dropping incendiaries and setting London ablaze. There were over 1,500 different fires set raging in London in those nights, the heart of them centred around St Paul’s Cathedral, which amazingly survived. One incendiary bomb dropped through the cupola, but didn’t ignite and was extinguished by brave fire wardens (the US broadcaster Edward Morrow reported to the American people that the cathedral was lost when he saw the incendiary pierce it). This is the same area, the City of London, that was burnt to the ground in the Great Fire of 1666, so December 1940 is sometimes called the ‘Second Great Fire’. Destroyed in this attack were the City Guildhall, eight of Christopher Wren’s other churches (including St Bride’s), Paternoster Row, The Old Bailey, the City streets from the Guildhall to St Paul’s, from Moorgate to Aldersgate, from Old Street to Cannon Street, all packed with architectural jewels.
It is commonplace in London to recognise the spirit of the people who lived through the Blitz. Amongst evacuations, tens of thousands dead, huge swathes of London (and Merseyside, Birmingham, Coventry and many other centres) destroyed, the war effort went on and the enemy never did invade. ‘Keep Calm And Carry On’ was the message – still emblazoned today on t-shirts and coffee mugs. As they crept out of the shelters and surveyed their destroyed city, Londoners would scrawl signs on their wrecked buildings: ‘bombed but not beaten’, ‘Hitler can’t stop us’ and – my personal favourite – ‘More open than usual’. But of course it wasn’t all high spirits. War is hell, as the man said. There was a real fear that England would be invaded. Members of the intelligentsia, like the literary ‘Bloomsbury Set’, carried suicide pills, convinced they were on a Hitler hit list and would be the first to go if the invasion happened.
But it was intriguing to see that the LTM’s exhibition linked together the experiences of London, Coventry, and – Dresden. That city too suffered dreadful bombing of historical buildings and great loss of life – from British bombers, one week before the end of the war. Two days in February 1945 saw at least 35,000 killed (some claims go as high as 100,000). The exquisite baroque jewel of a city was completely destroyed. Dresden has since suffered further as a pawn in a propaganda game, and this is not the place to dissect that one – there are many books on the subject. Yes, war is certainly hell.
But let us pause here and reflected that Dresden is now virtually completely rebuilt, including the Frauenkirche. This beautiful chapel was one of the last buildings rebuilt. When I first visited Dresden in the late 1990s, the kirche was still a pile of rubble, albeit rubble which had been sorted and numbered, ready for re-assembly. When I saw it again about ten years later, it was as it is now – rebuilt just as it was, like the rest of Dresden. Much of this rebuilding was done until the regime of Soviet Russia, since in the post-war carve up Dresden ended up in East Germany.
The LTM’s exhibition contrasted the fates of the Dresden Frauenkirche, London’s St Paul's Cathedral, and Coventry’s St Michael's – the remains of this gothic church have been left as ruins, with a new cathedral being built. Amongst this sorry litany – but also the rejuvenation - we might think of Christchurch Cathedral in New Zealand, toppled not by war, but by nature in this week’s earthquake, which also claimed lives.
War-time rationing in London lasted until 1954. From 1947 there was an acute housing shortage – around 1.5 million people were left homeless. The story of the housing estates and rebuilt cities which rose from the ashes, and the grandiose and heartfelt calls for ‘a land fit for heroes’ , is a story for another day - but definitely an interesting one. 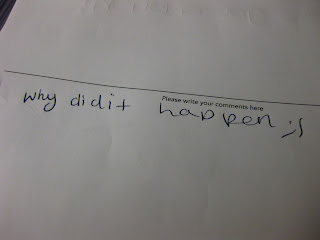