Saturday morning, 16th arrondissment, Paris; bakery on Avenue Victor Hugo, poodles tied up to the doggy-ring in the wall outside; Jim and I surveying the delectable goodies on offer. ‘I feel a blog post about croissants coming on’, I said, and snapped the requisite pic. Having made our selection, we fetched Zephyr and Zazou and headed back to Jim and Marilyn’s elegant and hospitable Paris apartment for an elegant and hospitable late ‘continental’ breakfast.

Crescent-shaped bread and pastries have surely been made for many years – Wikipedia mentions the Middle Ages and moon-worship – but there is no doubt that 19th-century Paris made the croissant its own. To make your croissant you need a variant of puff pastry that is leavened with yeast, and scads of butter that is folded into the pastry. Here’s a croissant recipe.

Apparently, in a (very attractive) answer to American take-away food, the croissanteries of Paris began in the 1970s to turn the things out in quantity when someone developed a frozen version that can be baked piping hot every morning. It seems that 30 – 40% of croissant sold in Paris these days are frozen product. But I must say, I have never yet been disappointed by a warm morning croissant from a French bakery. I am especially fond of the pain de raisin version, which isn’t strictly a croissant, I suppose, since it is not crescent shaped. But it is still the same yummy pastry, layered with raisins.  These days you don’t need to go to Paris for your croissant (but why not, if you can?) They spread quite quickly to far-clung French colonies like Morocco and Vietnam (where you can also get very good baguette, just by the way), and Wikipedia says you could get a nice croissant in Ethiopia by 1902. We’ll take its word for that.

There is a story going around that the Hungarians are responsible for the croissant – that it was created in 1686 in Budapest by a courageous and watchful baker, at a time when the city was being attacked by the Turks. According to Ochef:
Working late one night, he heard odd rumbling noises and alerted the city's military leaders. They found that the Turks were trying to get into the city by tunnelling under the city's walls. The tunnel was destroyed and the baker was a hero, but a humble hero — all he wanted in reward was the sole right to bake a special pastry commemorating the fight. The pastry was shaped like a crescent, the symbol of Islam, and presumably meant that the Hungarians had eaten the Turks for lunch. The problem with this story is that it's all made up.
Of course, in addition to leisurely weekend breakfasts, Paris does have other delights to offer the weekend visitor. In my case, these centred principally on shopping: les soldes are underway. Using my up-coming birthday as an excuse, I enjoyed visiting the local dress shop, where the clothes were très chic and the prices une aubaine. Following a revivifying pause at un bistrot, we paid a late afternoon visit to ‘the First’ (arrondissment, that is) to visit the amazing apartment of Madame Thomas, and conduct a whirlwind tour of her haunts. 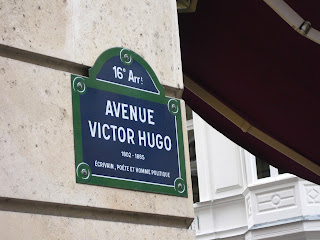 And what about these arrondissments? They are the administrative divisions of Paris, roughly translatable as ‘municipal districts’. In Paris each seems to have its own neighbourhood character, mostly very different. The 16th is elegant, relatively moneyed, ex-pats, elderly ladies in their high-ceiling apartments. The 1st, on the other hand, is the vibrant heart of old Paris, centred around Les Halles, which used to be the main city market before they moved that out and replaced it with a hideous underground shopping centre. But the little streets all around are full of street life and character.
The least populated of the 20 arrondissements in Paris is at the geographical centre of Paris, hence the area is crammed with historic sights. The Louvre Museum, Royal Palace, Tuileries Gardens, Forum les Halles, Bourse du Commerce and the upscale Vendome Square are all located here. The 1st arrondissement also comprises the western tip of the, Ile de la Cite, including the magnificent Sainte-Chapelle and the Conciergerie.
Even if the 7th arrondissement may be even more exclusive, the 16th arrondissement has the reputation of being the richest, and only the better-off are able to pay the high rents here. The arrondissement is bordered by the enormous Boulogne park on the west. Its only tourist attraction of sorts is the Palais de Chaillot, from where you can have a great view of the Eiffel Tower. The Palais de Chaillot is also home to several museums.


Two very different characters, but both quintessentially Parisien. In the 1st, you wander by the Centre de Pompidou on your way to buy baguette; in the 16th, the Arc de Triomphe is at the end of your street. Speaking of which, my favourite story about the Arc de Triomphe is that after the 1919 victory parade marking the end of hostilities in World War I, a pilot named Charles Godefroy flew his biplane through the main arch, and there’s newsreel film to prove it. The Arc stands 50 m high, 45 m deep and 22 m wide, and is the second-largest triumphal arch in existence.