Yesterday I saw my shadow for the first time in ages! Yes, the sun shone - a bit watery but diligent - glimpses of blue sky showed through, and the day was significantly LIGHTER! A London friend, concerned about (or disgusted with) my whining about the dark, sent me a message at about 8 AM: "Quick! get up! Today is forecast to be bright!" (Thanks, Claire!) Following instructions, I hurriedly made for the green spaces outdoors. Pausing only to have my breakfast, enjoy a coffee and read The Guardian, I set out for Regent's Park, two short tube stops from St Pancras (or a 20 minute walk, but I took the tube, as I didn't want to waste any time getting to the sunshine). 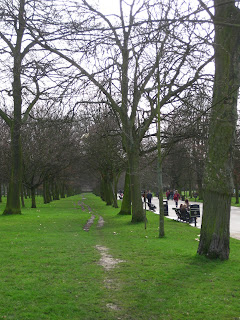 As you can see from the pictures in this post, the park is just beginning to show the barest signs of Spring - but they are unmistakable and very welcome. The official website hasn't quite caught up - it is still showing pictures of snowy fields (and snowflakes fall across the screen). Possibly they are waiting for a few more valiant spring bulbs to show their flowery heads.

It is 'half term' (school holidays) here at the moment, and the park was thick with kids. Also, Regent's Park (or, to give it its full official name, "The Regent's Park") is the home of London Zoo. In view of the swathe of young visitors, I wisely chose to save a zoo visit for another day. I had brought with me my text book on Epistemology. I obtained a hot chocolate (it wasn't that spring-like), and spent a pleasant hour considering alternately the sunshine and the kids, and the vexed question of whether knowledge comes solely or mostly from internal or external sources. 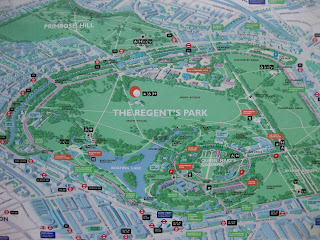 Then, with a view to maximising my exposure to sunlight and Vitamin D, I took a long ramble around the park, although I could see from the various helpful maps signposted about that there is a lot of it that I didn't reach, including a rather large lake. The whole park is 197 hectares with 100 acres available as sports fields. I think those figures include nearby Primrose Hill, from the top of which there are views across the city. At least, I think there are. On my one visit to Primrose Hill last weekend with my friends David and Paul (David lives there), we scaled the North Col to the summit (207 ft ASL), but grey drizzle prevented a full appreciation of the views. It did not prevent - indeed, it enhanced - a full appreciation of  brunch in a cute cafe at primrose Hill shops. 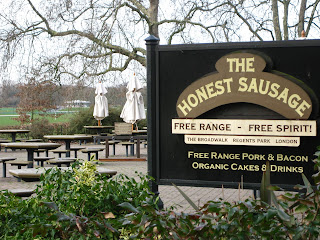 In Regent's Park I did find an eatery called "The Honest Sausage" which attracted my custom for lunch, with its claims of organic and small-business ethics. And of course, nice looking sausages:


All the sausages and bacon we use are sourced from a family run business in Gloucestershire. This company, run by three generations of the same family, use only free-range and organic pork sourced from small family run farms within 15 miles of their premises. Dad is a master butcher and they have won various awards including a joint Daily Mail/Soil Association award. They are also Royal Warrant holders, Master butchers to HRH The Prince of Wales.


Following my sausage lunch, I began walking back towards the largely forgotten city, and wandered into Queen Mary Gardens, a beautiful formal garden complete with a pond, ducks, roses on the cusp of bursting into leaf, and - de rigueur - a small arched bridge. It was here that the highlight of the whole expedition occurred - a swathe of blue sky showed itself, and there it was -- my shadow! So long unseen, almost forgotten, but returning to uplift the spirits!

The Queen Mary Gardens are named after the wife of George V, and are a world famous rose garden. At the moment the masses of rose bushes remain stick like, so I will have to go back in a  couple of months to report on the roses themselves. Right now there is a hush of anticipation over the rose beds....The web site says that there are 30,000 roses of over 400 varieties. Wow! I'm also told that the gardens contain "the national collection of delphiniums" and 9,000 begonias. REAL Spring must be quite something to see.


As to the history of the park, here's what its website tells us:

Known as the 'jewel in the crown', The Regent's Park (including Primrose Hill) covers 197 hectares. Like most of the other Royal Parks, Regent's Park formed part of the vast chase appropriated by Henry VIII.Marylebone Park, as it was known, remained a royal chase until 1646. It was John Nash, architect to the crown and friend of the Prince Regent, who developed Ther Regent's Park as we know it today. 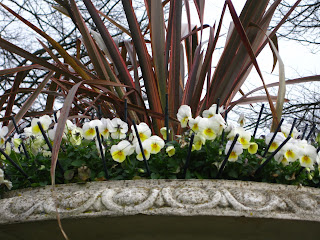 A vast rounded park was designed by John Nash, surrounded by palatial terraces, a lake, a canal, 56 planned villas (only 8 were ever built) and a second home for the Prince - a summer palace, which was never built.The Park became the home of several organisations like the Zoological Society and the Royal Botanic Society. It wasn't until 1835, during the reign of King George IV, that the general public were actually allowed into the sections of the Park and this was only for two days of the week.The main development in the 20th century was the creation, in the 1930s, of Queen Mary's Gardens. Of the buildings and monuments within the park, only two villas, St John's Lodge and The Holme

I guess we can assume from this that it is called "The Regent's Park' because it was the good Prince Regent (George IV - who has been discussed on this blog before) who finally let the pubic into the park, if only bits of it for two days a week. I, for one, was very pleased to be allowed in yesterday, to enjoy the first harbingers of glorious Spring. As Sue kindly reported today,  "It must be spring - the Archers are lambing at Brookfield, and today the cows stay out in the field all night!" 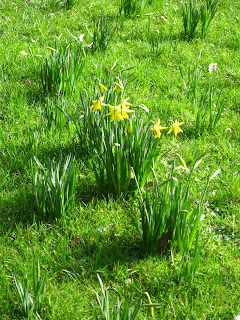 Posted by Annette Freeman at 11:24 AM