Tales of the Alhambra

In 1829 the American writer Washington Irving, who at the time had a job as a foreign diplomat, took a journey in Southern Spain from Seville to Granada. Last week I, too, made this momentous journey. In Washington Irving’s case, he was on horseback and the journey took a few weeks; and when he arrived at the famous Alhambra of Granada he found it a picturesquely crumbling ruin, inhabited by families of gypsies who had lived there for generations in its neglected decay. In my case, I was on a tour bus that set out before dawn, took three hours driving through more olive trees that you would ever have thought could exist in one place, and fetched up at the still-famous Alhambra to be wedged in a traffic jam. Instead of gypsies, I found a large group of tourists, a guide with a microphone and earpieces for us his charges (quite a good system). 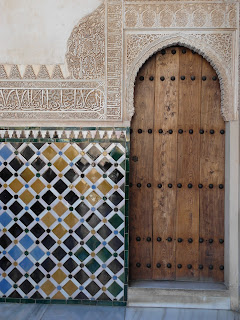