If you drive to a place called Milazzo on the north-eastern coast of Sicily, they will let you park your car for the grand sum of four Euro per day. Right by the docks. Moreover, it may even still be there when you come back. Then you can take the hydrofoil (an ugly, uncomfortable but fast way to travel) to the Aeolian Islands, those specks of mystery and myth somewhere out in the Tyrrhenian Sea, formed by volcanic activity, and still being formed by volcanic activity. But here’s a word of warning: just because the ticket office sells you a ticket to the island named Vulcano, and you show your ticket when you board the hydrofoil, and the timetable says it is going to Vulcano, this may not necessarily be so. Indeed, like me, you may end up with an unscheduled stop on a completely different Aeolian Island, and you may not even realise this until you are standing rather bereftly on the dock with your suitcase, watching the hydrofoil speed off, wondering where your hotel shuttle is. You may forlornly ask a passing old lady which island you are on, and she may reply ‘Lipari’.
Ah, Lipari. The largest (although not large) island in the group, which you may have wished to visit sometime during your stay, but for which you now conceive an unreasonable dislike. The old lady offers you accommodation in her house in rive al mare, but all you want is a boat. And possibly someone to blame. The old lady says this happens all the time. The guy in the ticket office, who receives the full force of your customer complaint, says this happens all the time. When, after an hour, the next boat takes you on the ten minute journey to neighbouring Vulcano (so close you could probably have waded, if it hadn’t been for the suitcase), the shuttle driver says this happens all the time. The people at the hotel reception say this happens all the time. Everyone shrugs their shoulders. Why doesn’t the boat service announce the arrival destination? You ask. Calmly and reasonably (hah!) Everyone shrugs their shoulders.
But wiping the despised Lipari from your mind, you look around, and discover why everyone has been telling you that you are very lucky to be coming to Vulcano. A tiny island with a two-horse town of shacks and fishing boats, black lava sand beaches, a divine resort indistinguishable from Paradise, and a great smouldering volcano. What more could you desire (other than an efficient boat transfer service)? Fresh fish every day? Check. Hot sulphur pools you can swim in? Check. Glorious sunsets over the sea every night? Check. Cocktails to go with the sunsets? Check.
You can wander down to the town, or take the shuttle. Or, since the resort only opened for the season the day before and there are about two guests so far, just ask and the shuttle guy will take you anywhere. The whole island is only 21 square kilometres. In town, you can make friends at the local fish place (‘Da Vincenzo’) and choose from whatever was caught that day, plus local veggies in season, fava beans and artichokes. And excellent Sicilian wine – even a little more than you might otherwise imbibe, since the hire car has been abandoned to its fate on the mainland.

Ah, and then the volcano! The Romans named the island Vulcano and contributed the word we now use for volcanoes. They believed the island was the chimney to the god Vulcan’s workshop. Vulcano’s own volcano is known as the Gran Cratere (although there are several others as well, including the smaller Vulcanello). Its height is 380 m, and it takes about an hour to walk up the well-formed path, dodging a few goats and a lady who wants you to pay 3 Euro for the privilege. The volcano is one of four active non-submarine volcanoes in Italy, but it hasn’t erupted seriously since 1888-1890.
The walk is a fine one and the views from the top quite amazing – both down into the sulphurous, steaming crater, and across towards Lipari and the other islands. If you climb on for a further half an hour you can reach the highest point and a magnificent 360 degree view. Almost all the Aeolian Islands can be identified from up here, if the misty distances give you a break: Lipari immediately below you, Panarea to the east, and the active Stromboli just visible beyond it; then the two smaller islands of Filicudi and Alicudi to the west (they that enhance your sunset). And you could kid yourself that you can see Salina but really it’s behind Lipari; and little Basiluzzo out near Stromboli really can’t be made out. Once you’ve swooned over the view, you climb back down around the volcano crater, and if you’re not careful you will find yourself taking a different path down through what turns out to be some pretty active fumaroles spewing rather disgusting sulphur gas and almost taking out a group of lost French tourists. Picking your way gingerly over the yellow rock, you will probably decide that swimming in the sulphurous pools in town (“throw out your bathing suit afterwards”) can probably be skipped; although it is fascinating to see some hot springs actually bubbling up in the ocean just off the beach.
Vulcano was originally called Therassia (by the Ancient Greeks; it means ‘source of heat’), and whoever built the delightful resort of the same name knew how to choose a location. 'Therasia' sits on the end of a small island joined by an isthmus to Vulcano proper, and Lipari is right across the channel. The infinity-edge pool, cactus gardens, pictures windows, cool terraces, and possibly the most magnificent sunsets on the face of the earth are nicely complimented by some very friendly staff, in their first week of the season. The sunsets – ah, let me tell you more about the sunsets. As well as the usual magic of a sunset over the sea (forgive my raptures – I’m from Sydney and a sunset over the sea is impossible there), on Vulcano you only notice the two small islands emerge from the mist when the red ball of the sun drops slowly behind them, silhouetting their pyramid volcano cones against the red of the setting sun. Add a gin and tonic and anticipation of a fresh fish dinner, and I think you’ll understand why I was reluctant to leave Vulcano. Very reluctant. 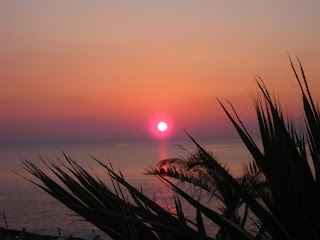 Oh, and the car was still there when I got back to Milazzo.
Posted by Annette Freeman at 6:43 PM