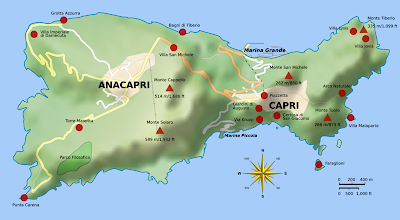 When I checked into the Hotel Quisiana on Capri, I asked the friendly woman who showed me to my room what were the best things to do and see on Capri. She told me the main thing was to “walk around”. I did a lot of walking on the Isle of Capri, although that’s not how I began my explorations. The first step was to get myself to Anacapri, the ‘second’ town on the island, over the hill and far away.
The choices were a bus (actually a kind of pint-sized half-a-bus, to cope with the narrow winding roads) or a taxi. The taxis lined up at the transport stop near Capri’s tiny piazza Umberto I were all fitted with convertible soft-tops, although when I asked my cab driver to ‘put the top down’ he told me it was far too cold yet. We’re early in the season. The drive to Anacapri took about 5 minutes and cost €15, but it was a spectacular experience, winding around the cliff face with the sheer drop to the sea on one side.
Dropped off in the pizza at Anacapri, I could see that little shopping was in order, and spent some time with a local sandal maker. Walking around the picturesque village in the increasingly warm sun I followed a sign pointing the way downhill, to the grotto azura, Capri’s famous ‘blue grotto’. The hotel had already told me that morning that boats were not venturing into the grotto today – famous for the beautiful azure blue of the water and the speedy trips in and out that afford the local boatmen a way to make a quick buck. The Rough Guide had mentioned that it was possible to walk to the grotto entrance from Anacapri, and usually the Rough Guide is reliable. Off I set on an ever-descending roadway, meeting various other people doing the same thing. An hour and a half later (the Rough Guide had neglected to mention the length of the walk) I reached the rocky seashore at one tip of the island, where a lone souvenir and beer shop was open for the early season tourists. The sea looked blue. I caught the bus back up to the town. 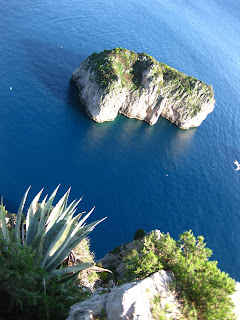 Walking around the “streets” of Capri is indeed fun, though there are plenty. Having exhausted the shopping potential, and indulged in one too many gelati, I took another 1.5 hours walk on a circuit that wound up through Capri village and then down numberless steps to another grotto; around a rocky promontory and to the foot of Faraglioni, an impressive group of rocks in the sea at the foot of the cliffs. These formed part of the wonderful view from my hotel balcony. The rest of the walk made its way back into the ‘suburbs’ of Capri village, where the locals could be seen dealing with the hills in various really narrow little motor vehicles which are just the maximum width to fir along the narrow pathways; or hauling their stuff uphill in wheeled trolleys. The local people must have excellent cardio vascular fitness. Either that or bad knees.
The next day in Capri, with the sea still to choppy for boating, I ventured on another walk, up to the very tip-top of the eastern end of the island, where stands – or rather, crumbles – the remains of the Villa Jovis, a Roman era villa said to have been built by Roman emperors in the first century AD as a bit of a holiday retreat. Famously, it was occupied for ten years by Tiberius, and thus is often referred to as ‘the Villa of Tiberius’. The mountain it is on is called Mount Tibero (335 metres ASL). 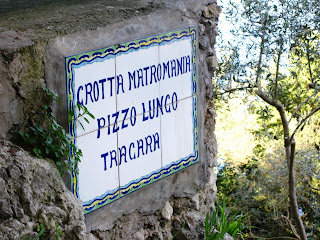 Tiberius was emperor from 14 AD to 37 AD, part of the dysfunctional Julio-Claudian dynasty and a great-uncle of Nero, the last of that dynasty. He came just before Caligula, if you are keeping a time-line. He started out as a great general, but ended as a gloomy recluse, litting out to Capri for the last half of his reign, and gaining a reputation for terrible acts. He’s said to have tossed those who crossed him off the Capresi cliffs at the Villa Jovis. Trust me, I checked – it’s very long way down. However, rumours of Tiberius’ cruelty may have been greatly exaggerated, especially by the historian Tacitcus, who had rather a line in purple prose. Still, Tacitus’ stories of what went on on Capri (think lurid perversity, cruelty and paranoia), whether true or not, show at least what Tiberius’ reputation was like back in Rome. It seems probable that it was his fear of assassination (and depression over the death of his son) that led Tiberus to live in the very hard to reach Villa Jovis.
The remains of the Villa Jovis are extensive, if crumbling, and it is easy to appreciate what a spectacular piece of real estate the spot was – indeed is. Later on someone built a church smack on the highest point, amongst the ruins, and there is a very tall statue of the Virgin up there, which you can spy from far away as you approach or leave Capri. The baths are clearly defined; and there are huge cisterns which presumably held a water supply. The emperors had a promenade along the cliff top, looking back towards Naples.


It was a good, strenuous walk up to the Villa Jovis, but all downhill on the way back, to another well-deserved gelato and the boat to Amalfi.
Posted by Annette Freeman at 7:13 AM