Monty Python at the Opera

Monty Python’s Flying Circus meets Berlioz. What will happen? A gloriously busy, chaotic and evocative opera production with a charming Mephistopheles, that’s what. It wasn’t really Monty Python, but one of the members of the Flying Circus, Terry Gilliam, directing his first opera, Berlioz’s “The Damnation of Faust”. Berlioz’s opera was inspired by Goethe’s book “Faust” (Goethe twice in one week!) and first performed in 1854.
When Belioz wrote the piece he intended it as a concert performance, so when opera directors and designers get hold of it, things are known to go rather to their heads. I have seen it performed only once before, in a Robert Le Page production at The Met in New York, and the crazy video effects, acrobats, Susan Graham’s head projected over the whole of The Met’s substantial proscenium and a particularly amazing version of Faust and Meph’s crazy horse ride all remain memorable.


At the English National Opera last week Terry Gilliam and his German designer Hildegard Bechtler gave us Faustian images from German Romanticism, through the WWI carve up of Europe by its crowned heads, to a Berlin weinkeller, to Auschwitz and war. The horse ride became a wild dash on a vintage motorcycle; the doomed Marguerite was doomed because she wore a yellow star. It sounds crazy, but it worked very well, with the copious stage business fitting the music and libretto (translated into English) more or less perfectly. Marguerite’s soul’s ascension into heaven was particularly poignant in its Auschwitz context. 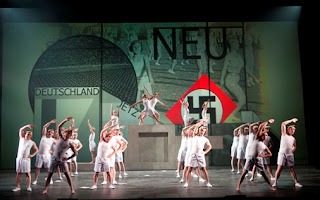 Our Meph, Christopher Purves, was very well sung and played – but as someone reminded me, Meph is always charming. It’s part of his modus operandi. The tenor, Peter Hoare, did a good job with Faust and his bright red hair and the weight of the world on his shoulders; and Christine Rice sang Marguerite beautifully. I especially enjoyed the scene in her bedroom with Faust hiding behind her curtains – evocative, lovely singing, and a bit of respite from the lunatic craziness of some of the other scenes (which might have been a bit more overwhelming for me since my last minute ticket purchase meant I was sitting in the front row – a little further back may have been better).


Terry Gilliam has of course more to his credit than being the American member of Monty Python’s Flying Circus, including films and cartoons. I think his first opera excursion can be considered a success.

And here's Susan Graham's Marguerite at the The NY Met in the Robert Le Page production.