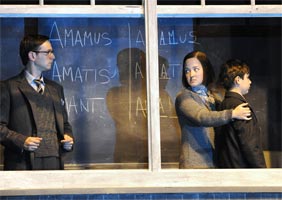 And I'm not referring to the weather. I saw the current ENO production of Benjamin Britten's 'Midsummer Night's Dream', a Christopher Alden production, and it was strangely nightmarish. Not that this was unexpected - I heard a pre-opening talk by Alden, along with the conductor Leo Hussain and some of the cast a few weeks ago, and knew to expect a setting in an early 1960s boys' school, and some references to the composer himself, in the form of his schooldays and his homosexuality.

I'm all in favour of creative re-interpretations of opera, and this one has a lot to recommended it - weird though it may seem, Faerieland and ancient Athens actually translated rather well to the boys' school milieu. It's just that along the way things all became rather dark: incipient paedophilia, joint smoking, teenage agony, a sense that degrading things have won. This was, presumably, the message, and artfully conveyed it was too. 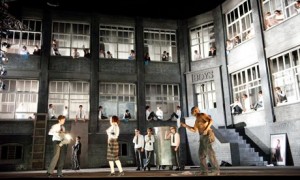 But if you detect a note of cautious disappointment here, you're probably right. This is because I rather like Oberon - indeed, I thought the singing of the counter-tenor, Iestyn Davies, was absolutely superb. It's just that he was turned into a nasty character. I am also rather fond of the  large children's chorus that this opera calls for, and I think I prefer the light-heartedness of having them as little fairies rather than schoolboys. The two pairs of lovers also have some lovely music to sing, and can be played for laughs. This is made a teensy bit more difficult when they are cast as schoolboys and schoolgirls getting together behind the garbage bins (or whatever those big bins were supposed to be). The mechanicals were a bevy of groundsmen, sports teachers and school handymen, and their characterisation wasn't too much altered. The cast did a good job, though I have seen Bottoms I preferred. If you know what I mean.

And the Queen of the Faires, the divine Tytania? Well sung by Anna Christy, but a million miles away from fairy divinity as a repressed school-marm in a plaid skirt and cardigan. Even when led astray with a smoking joint.

That's enough of that. I found the conceit of the production interesting, no more. I found the performances and the music quite beautiful. Here's what other people thought:

Posted by Annette Freeman at 4:09 PM