The Cotswolds - what’s in a name? 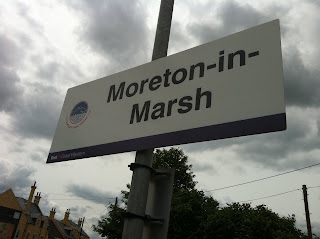 The Cotswolds is a delightful area to visit for a multitude of reasons but one at the top of the list must surely be the attractiveness of its place names. The novelty of staying in Moreton-in-Marsh or Bourton-on-the-Water or - if you prefer - Bourton-on-the-Hill is, you must admit, a pretty strong drawcard. And consider these delightful places: Ashton-under-Hill, Barton-on-the-Heath, Ascott-under-Wychwood and Stow-on-the-Wold. With their descriptive names, you just want to check them out. And that’s before we even get to one of my personal favourites, Upper Slaughter. And indeed Lower Slaughter. What is the weather like, do you think, in Cold Aston? And can we - should we? - speculate about Weston-sub-Edge? Or Wyre Piddle?

The name Cotswold is sometimes attributed the meaning "sheep enclosure in rolling hillsides", incorporating the term "wold” meaning hills. The English Place Name Society has for many years accepted that the term Cotswold is derived from Codesuualt of the twelfth century or other variations on this form, the etymology of which was given 'Cod's-wold', which is 'Cod's high open land'. Cod was interpreted as an Old English personal name, which can be recognised in further names: Cutsdean, Codeswellan, and Codesbyrig, some of which date back to the eighth century AD. It has subsequently been noticed that "Cod" could philologically derive from a Brittonic female cogname "Cuda", which is the name of a mother goddess recognised in the Cotswold region.

My personal choice of village was Moreton-in-Marsh, and so that is the one I am going to tell you about. It was established in the 13th century, and like many Cotswold towns it grew up straddling a broad street (which has now become a through road, necessitating motorists slowing to a crawl and local pedestrians dodging a slowly crawling stream of traffic). In the case of Moreton-in-Marsh,the major road bisecting it is known as the Fosse Way. This is one of Britain’s major Roman roads. It marked the frontier between the conquered and settled south east zone, and that of the untamed uplands of western Britain in 47 AD. The name ‘Fosse’, descriptively if not romantically,  comes from the word for ‘ditch’ which ran on either side. The road ran from the south coast of Devon to near Lincoln, and much of it is still in use today, though cleverly disguised as an A-road or B-road, and frequently re-named “High Street”, so that the British motorist may never think of the ancient Romans who once ruled his green and scepter’d isle.
I gave my custom to one of the many pubs on the High Street of Moreton-in-Marsh, the White Hart Royal Hotel. Here’s an eloquent description from the pub's web site:

The White Hart Royal Hotel was once a coaching inn. Its reputation was enhanced when King Charles I sheltered in the inn following the battle of Marston Moor on 2nd July 1644. A copy of the King's unpaid bill is commemorated on a plaque within the entrance lobby.
The principal part of the hotel was built of sandstone under a pegged oak roof in the early 17th century. It was substantially extended in 1773 and 1782 and has recently reopened following a major restoration and refurbishment program utilising the original building with no modern extensions on this grade II listed property. Its collection of period artefacts and paintings reflect the four centuries of the hotel's evolution while guests now have use of facilities equipped to 21st century standards.

I can report that the facilities were indeed up to suitable standard, and the floors were attractively cobbled (downstairs) and wavy (upstairs). The town of Moreton-in-Marsh boasts a train station (about 2 hours to London), Mrs. T. Potts’ Tea Rooms, and a Cotswold Cheesemongers. It is also conveniently close to the more minute village of Longborough, where on the weekend of my visit a delightful country property was in the full swing of its Summer Opera Festival (yes, if there’s opera, I’ll find it).


Two friends, Louise (mezzo soprano) and Rodney (baritone), were singing in the current production, Mozart’s ‘Cosi fan tutte’ and naturally I wanted to be part of it all. We shared lunch in the snug at The White Hart, and I was thrilled at the backstage dramas preceding the evening’s performance (involving a sick soprano, her replacement, whether she would breathe on anyone and pass on her germs...I’ll say no more...Singers are awfully paranoid about getting sick, understandably.)


Then off to the performance, driving the 3 miles to Longborough, parking on the greensward, making my way into the improbable 600-seat opera house built by the afficionado owner...in the pouring rain. Yes, in the time-honoured tradition of the British summer, the picnics on said greensward were washed out.


The opera house at Longborough is a converted barn, furnished with the seats that Covent Garden threw out in its most recent refurbishment. How happy that they found a new home! The Opera Festival began in 1991 as an operatic concert in the owners’ drawing room of their country house, and - as opera is wont to do, given half a chance - expanded into the converted barn. Actually, I found out about the barn thing on their website - it is a very swish building now with no sign of its origins.


The ladies in full evening regalia (think jewels and furs) and the gents in black tie opened their large umbrellas and kept calm and carried on. The opera is organised so that there is a 90-minute supper interval. This would allow for a nice long delightful evening picnic, assuming dry weather. In the event, I joined two new friends introduced by Louise and Rodney and we partook of a (very tasty) supper under a marquee...which filled rather ominously with rainwater, but we survived. I felt that I was having a very English summer experience.


The opera itself was lovely. It is a nice frippery story which was staged very cleverly with few props on a small stage, updated to the Fifties, the surtitles projected onto the back wall (very easy to read!) and a scene on what could be a cruise ship. The direction made the production seem much more elaborate than the few props would suggest. My girl and boy were of course marvellous, as was the replacement soprano (who sang from the side of the stage while the poor sick one ‘walked’ the part on stage).
Here's a review.

I enjoyed the music very much, and meeting new friends Michael and Gina, and the cosy drink in the local pub afterwards. I even managed to drive back to The White Hart without getting lost. A very successful, if damp, evening.

Posted by Annette Freeman at 8:17 PM