I find I cannot leave the subject of Shakespeare just yet. I have lots more to tell you. Not about another play - the season at The Globe Theatre on London’s Southbank is in full swing, but tickets to the plays are booked out months in advance.The Globe Theatre is a faithful reconstruction of the open-air playhouse, first built in 1599, where Shakespeare worked and for which he wrote many of his greatest plays. Each year over 350,000 members of the audience experience the 'wooden O' sitting in a gallery or standing as a groundling in the yard, just as they would have done 400 years ago. Since it is in part open to the elements, The Globe’s season runs from April to October. 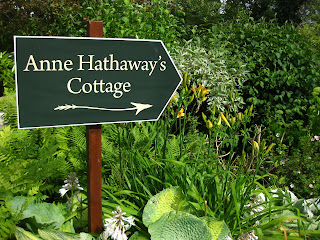 As we all know....Shakespeare was born in Stratford-upon-Avon, in The Cotswolds. He lived 1564 to 1616, dying at 52 years old. In Stratford one can (and many do) visit Anne Hathaway’s Cottage, the farmhouse where Shakespeare’s wife lived with her family, and where he is said to have wooed her. They have a wooden bench by a settle, where the bard’s bum is supposed to have rested. One former owner spread this about in order to make a fine profit from selling off bits of the bench, rather like religious relics. The Cottage is very interesting to visit as an example of a prosperous 16th century farmhouse. Whether Shakespeare and Anne ever sat on the famous bench, when he was 18 (and she 26) they “had to” get married because she was pregnant. They had three children eventually, Susanna, and twins named Hamnet (who died) and Judith.


The house in Stratford-upon-Avon where Shakespeare was born and lived his early married life can be visited also, and again is very evocative and well-presented. It fronts a busy shopping street in the town, and has been “enhanced” by an audio-visual experience ‘spectacular’ to which all visitors are treated before emerging gratefully into the calm of a recreated Tudor garden, tastefully adorned with people in period costume playing lutes and so on.  The audio-visual thingy features some Shakesperean artifacts, like the very stone base of a town monument next to which Shakespeare’s father would once probably have stood to sell gloves. the most interesting one was a copy of the First Folio - there’s another in The British Library, which dedicates its “Treasures Room” to the foresighted individuals who gathered together all the known copies of Shakespeare’s plays into this volume several years after his death. It is the First Folio that provides our best record of Shakespeare’s plays. (The British Library also has lots of the so-called “quarto” versions of individual plays as well - it is amazing how much of Shakespeare’s work survives).


Stratford-upon-Avon has preserved a number of Shakesperean sites, which you can read about here. On the subject of his birthplace, they say:
Shakespeare's Birthplace has been welcoming visitors for over 250 years. William Shakespeare grew up here and he played here. He ate meals in the hall and he slept and dreamed in these rooms. Shakespeare also spent the first five years of married life in this house with his new wife, Anne Hathaway.
For millions of Shakespeare enthusiasts worldwide, the house is a shrine. You will discover the world that shaped the man and you'll find out what other famous writers thought when they visited here. Well-known visitors have included Charles Dickens, John Keats, Walter Scott and Thomas Hardy.

There is a period of Shakespeare’s life about which very little is known, but sometime or other he left Stratford - possibly to earn his keep - and moved to London. Anne and the children stayed behind. He possibly worked as an actor - he seems to have had lots of actors friends - and by 1592 he was starting to make his mark as a playwright. By this time he had probably completed his “Wars of the Roses” tetralogy (which ends with “Richard III”). he managed to avoid catching the plague in 1592, luckily (*with great understatement*) The Globe Theatre opened in 1599, and from then on most of Shakespeare’s new plays were performed there. he was particular friends with the actor Richard Burbage, for whom he may have intended many of his leading roles.

Hamlet was written in 1600-01, and the darker tragedies followed: Othello, King Lear and Macbeth. His father died in 1601 - there is some evidence that Shakespeare travelled regularly back to Stratford - he invested n property there -  but there is precious little to go on for those wanting detail of his private life. It is thought that he and Ben Jonson, a fellow playwright, engaged in “wit-combats” in London taverns. “The Tempest” , 1611, is thought to be the last play that Shakespeare wrote on his own (there were some later collaborations with John Fletcher). In 1613 The Globe burnt down. It was rebuilt, but Shakespeare moved back to Stratford. he saw both his daughters married and his first grandchild born. He died rather suddenly, put down to an attack of pneumonia. He was buried beneath the floor of Holy Trinity Church in Stratford, where he had been baptized.