The Fifth of November....commemorated in England since 1605, when one Guy Fawkes was discovered by the authorities keeping watch over a pile of gunpowder stashed under the House of Lords. Not merely commemorated, but he is burnt in effigy on that date every year. That’s a lot of ire to attract.

Spending the evening at the Wimbledon Park community bonfire and fireworks yesterday evening - competing handsomely with the nearby Wandsworth Common community fireworks, the two shows exploding in tandem - I got to musing about Guy Fawkes, of whom I knew little except that he was involved in a plot to blow up Parliament, and has been burnt in effigy ever since. Wikipedia to the rescue!

It seems that the matter runs a little deeper, and involves a little more, well, religious fundamentalism, since Guy Fawkes was a Catholic, and dire treason besides. He was born in York, which I mention in case you are wondering why there is a Guy Fawkes Inn  in York. He had fought with the Catholic Spanish against the Puritan Dutch in the Low Countries (where he was known as “Guido”) and then went to Spain to try to rally a rebellion to re-place a Catholic on the English throne. He and his fellow Gunpowder Plotters had that aim. So Guy and his effigy came to symbolise not just him, but Catholics generally. By the mid 1650s people were burning effigies of the Pope, and later any other prominent Catholics. In the 20th century, even Margaret Thatcher (who was not, as far as I know, Catholic, just not terribly popular) was burnt in effigy. But all in good fun, I’m sure.

The Gunpowder Plot was rather elaborate, and the conspirators spent a while building up their stash under the Houses of Parliament. Guy Fawkes’ job was to light the fuse and then run. James was on the throne (James VI of Scotland and James I of England - the same person - keep up, now). His daughter was to be captured and spirited away to the country; while Guy would be off to the Catholic heads of state in Europe to explain why they had to kill the king. Killing kings was not popular with any other kings, Catholic or otherwise, for obvious reasons. You wouldn’t want to start a trend. Though the English did eventually dabble in that...but I digress....

Guy Fawkes was discovered guarding the gunpowder hoard, there having been a tip-off by anonymous letter. He was captured and tortured until he confessed, and sentenced to be hung, drawn and quartered. He threw himself off the scaffold, breaking his neck and dying on the spot, thereby avoiding the agony of the last two gruesome bits of his sentence. As some wit said, Guy Fawkes was "the only person in history to enter parliament with honest intentions."

And so today, 400 years after the event, whether it’s because of his nefarious revolutionary plot, his Catholicism, or just for the fun of it, we burn his effigy. Perhaps the many little kids running around Wimbledon Park last night with their light sticks and hotdogs and fairy floss will learn all this in school one day. Personally, I thought the guy last night looked a lot like Donald Duck, though it was difficult to see him clearly in the dusk, before he went up in flames on the enormous bonfire, brought to us by the local council.


The word “guy” came to mean any oddly dressed person, after the effigies which were often made by children from old rags and newspapers. They used to beg passers by, displaying their creation and asking for "A penny for the guy".  Eventually the word lost its pejorative connotation and came to mean any male, or even females too - as in “Hey, guys, did you enjoy the fireworks?” 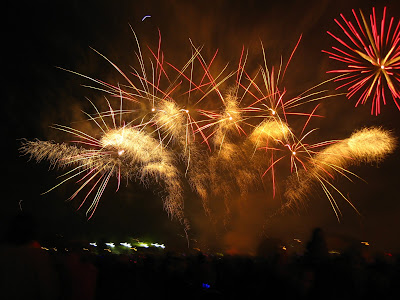 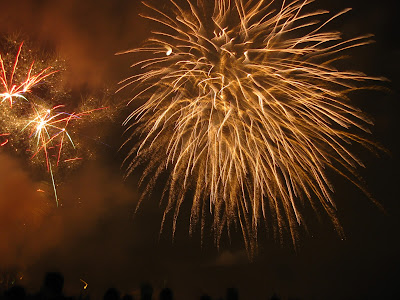 Posted by Annette Freeman at 4:44 PM