Music on the road

Today's Bootsnall travel blogger challenge is about music - which is an excellent thing for me, since I often blog about wonderful opera and concerts I have seen and heard while travelling. In fact, I'm off to The Barbican Centre tonight to hear Riccardo Chailly and the Gewandhaus Orchestra Leipzig perform Beethoven's Ninth! But for that very reason - real experience trumping blogging in this instance - I am going to cheat a little today and re-post a previous story about some amazing music I discovered...

Here's the prompt of the day:

Music and travel memories often go hand in hand. A song can inspire our explorations, or it can take us back to a specific place and time. Tell us about your travel playlist and what it means to you.


Our instructions are that we can interpret these prompts how we wish - they are meant to inspire, not be essay questions. The reference to 'playlists' did remind me of my MP3 player on Mt Kilimanjaro:

I resorted to my MP3 player to help chill out and ease the tediousness. My opera compilation took me out of things for a while. I paused, leant on my poles, and looked back across the flank of the great mountain – some of the glacial ice was now level with us – and out over the clouds to the valley floor far, far below, as Kiri Te Kanawa as the Marschallin led the glorious final soprano trio from Strauss’ ‘Der Rosenkavalier’. What a lift that gave me. The mountain, the music, the achievement of having got this far, the privilege of experiencing what so few do. It was a moment I won’t soon forget. [From 'Mt Kilimanjaro & Me']


Listen, and imagine this music playing in your head while you're high up on a mountain, trying to find the will to go on....yup, that does it for me.

But  what I really want to tell you about, just in case you missed it the first time around, is the Gnaoua music of Essaouria in Morocco: 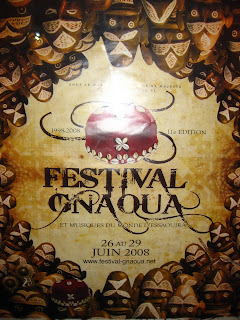 It doesn’t matter if you can’t pronounce either of these words. Just know that Gnaoua (sometimes spelled at Gnawa) is wonderful hypnotic music, and that the Moroccan city of Essaouira holds a Gnaoua Festival every year in June. I wasn’t there in June, but the town was still full of this trance-like music.

My first experience of Gnaoua was when live music struck up during dinner. The restaurant had been playing western light jazz on CDs, we’d been eating fried shrimps and octopus, and drinking Casablanca beer. Then the character of the music changed, and we walked around the Moorish partition to find a two-man band. One was playing an odd rectangular guitar-like box: a hasty consult of the guide book disclosed that this was a gimbri (described by some as a 'bass lute'). The other guy was playing an electronic keyboard. The gimbri-player was wearing a traditional Moroccan cap with a long tassel, which he was rhythmically swinging around his head in time with the hypnotic beat. Both musicians were young: what we were seeing here was a new edition of Gnaoua, a marriage of the traditional trance music of the desert sufis, and modern reggae, jazz and hip-hop.

It is this marriage that inspires the Annual Essaouira Gnaoua Festival, and attracts western musicians to come and perform and improvise with their Moroccan brothers in music. After this revelation late at night in the restaurant (resulting in a 1 am return to our backstreet riad in the medina), the search commenced for some CDs of Gnaoua music. A number were eventually purchased, but nothing seems quite as special as those two guys amongst the exotic pillows of the restaurant bar, the gimbri-player with his tassel swinging.


And for the music itself: here’s a clip gleaned from You-Tube:

And just to keep us in the (travel) musical mood, a contribution from a group of cafe entertainers in Morocco - I particularly like the dancing.....

Posted by Annette Freeman at 5:50 PM