Scotland in Five Days: Day One


If you want to take a quick look at Scotland - well, you will have to restrict your destinations, of course. There’s borderlands, lowlands and highlands to consider. But here’s one possible itinerary. You will notice that it avoids airplanes altogether, and also cars to a significant extent, and relies on that most leisurely and civilised form of transport, the railway. It also involves staying in some rather lovely destination hotels. This is was a deliberate choice, since in February you can’t expect the weather to be too kind, and indeed it might be downright nasty. So the accommodations were chosen for their welcoming nature, and provision of fireplaces.


Day One: Proceed to Kings Cross Station, London, and board the train for Edinburgh. The journey is picturesque and takes about four and a half hours. Have lunch on board. Alight at Edinburgh’s Waverley Station, positioned at the foot of The Mound between the Old Town and the New Town. Proceed up the hill towards The Castle, stop on the Old Town cobblestones just before The Castle gate, and arrive at The Witchery, a restaurant with with rooms.

Meet your eccentric housekeeper Roxy, climb two stories up a stone spiral staircase, and enjoy a full tour of your room, called The Guardroom, in a 15th century building on the Royal Mile. Admire the opulent decoration, the extraordinary bathroom, the costumes and the view of the Old Town rooftops. Note that the hallway slopes, er, downhill. You have two sitting rooms, a large bedroom, the aforementioned bathroom, and a hidden kitchen. Two fireplaces (gas) are in evidence. But sadly, Roxy explains that the Power-That-Be have decreed that they are too “dangerous” and you’re not allowed to use them. A glint in Roxy’s eye says that you might if you dare, but in the end you don’t dare.

In fact, not only is the heating quite fine, but the weather is surprisingly mild, temperatures having crept up into double digits. Set out for a quick afternoon tour of Edinburgh Castle, that magnificent redoubt perched above the city. The Castle was once home to Mary. Queen of Scots, and in a small back room (with n excellent view) she gave birth to James VI (of Scotland; he became James I of England -- but it’s a long story). Ponder a while in this small room, the sad and short life of Mary, cousin to Queen Elizabeth I, and threat to her throne. Cheer up by viewing the Scottish Crown Jewels and the Great Hall.


It’s windy at The Castle, and the evening is drawing in. Take a stroll down, and back up, the Royal Mile. Inspect the cashmere and tartans in the shops. Consider the astonishingly wide selection of whiskies. Go back to the The Witchery for dinner, since its restaurant is considered one of Edinburgh’s finest. Sample haggis and Scottish salmon. As a digestivo, try a single malt. Half an inch of deliciousness.


Next morning, enjoy a Full Scottish Breakfast (warning: black pudding is involved); consider porridge with whisky, reject. Take an after-breakfast stroll around the Old Town. Stop in to The Elephant Cafe, where local resident J K Rowling is said to have spent her time writing some of the early ‘Harry Potter’ books. Happen by accident upon the Scottish Writers' Centre in Lady’s Stairs House and view exhibitions about Sir Walter Scott, Rabbie Burns and Robert Louis Stevenson. 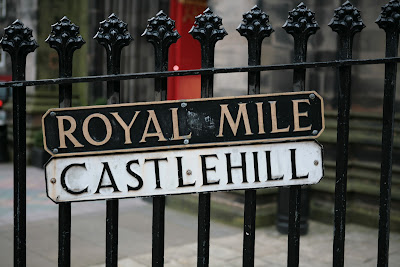 Miss your train, because Edinburgh is so absorbing...but return to Waverley Station and catch the next one...to Glasgow.

Posted by Annette Freeman at 11:43 PM