Nancy and the Blitz

As I’ve mentioned before, the Blitz is very top-of-mind with Londoners. It is difficult to have a conversation of any length without the subject coming up, obliquely or directly. It is difficult to appreciate just how much of London was destroyed by the bombing in WWII, but  the acres of devastation that required re-building explain the hodgepodge of architectural styles. It also explains why many buildings that look “old” are in fact relatively “new”, being reproductions (at least in their facades) of their Victorian forebears, sent to rubble by the bombs in the 1940s.


It also explains many of the great housing estates, built with more or less speed after the war to house the millions of homeless, and partly explains why many of these are situated in the middle of more venerable buildings. But Britain’s experiments with housing estates are a (fascinating) subject for another day.

Today I want to repeat for you a description of London in the middle of the Blitz, 1940 to be exact, written by the aristocratic (though rather destitute) novelist, Nancy Mitford (one of six sisters, some more notorious than others). I am presently reading ‘Nancy Mitford - The Biography’ by Harold Acton, which is more or less comprised of her letters. 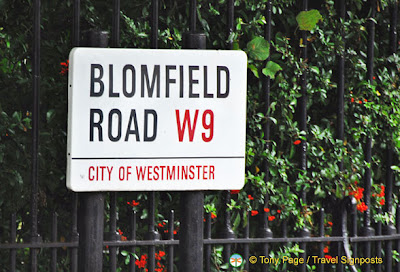 12th September 1940, she wrote to her mother from Blomfield Road

We are catching it here all right as they are gunning for Paddington. On Tuesday Pete appeared with two babies of one of his soldiers (6 and 3) who had been blown up in Brixton and whose mother is dying of a miscarriage. We put them to bed in the kitchen - a 2 pm the house next door got an incendiary and caught fire so I (in my night dress) put the children into an eiderdown, got a taxi and put them to bed at Zella’s [her former governess]. Came back here, having been nearly blown out of the cab when Fitzjohns Avenue went, and shot at by the home guard on the way for not stopping. Then we had a rare pasting here - five houses in Portsdown Road just vanished into smoke, two bombs in Warwick Avenue, one in Blomfield and three in Harrow Road. Next morning at 9 I got a very sporting taximan who took the babies, Gladys [her maid], Milly [her pug], my fur coat and all my linen to Diana Worthington. I have gone to live with Zella for the present as I can’t very well be here quite alone at night. I don’t at all advise you to come to London, it is not very agreeable I assure you. 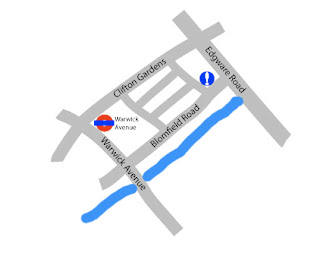 A vivid picture, all the more striking to me when I read it because the streets she mentions are right in my neighbourhood. Warwick Avenue and Blomfield Road are just a few blocks from me, along the edge of Regent’s Canal. As Nancy mentions, it is not far from here to the great station of Paddington, and she suggests that the bombers were looking to hit that.


To walk those quiet streets today, lined with mature trees and with building facades that look Victorian, you’d never know that many had been destroyed by incendiary bombs. And when I come home at night in a black cab, I certainly don’t think of being shot at by the Home Guard or being “nearly blown out of the cab when Fitzjohns Avenue went”.

And don’t you just quake with admiration at the sheer understatement of “it is not very agreeable I assure you.”

Now here's a treat: nothing much to watch, but listen to Nancy Mitford's delectable aristocratic voice as she discusses...air raids during the Blitz - and her maid Gladys.

Posted by Annette Freeman at 9:21 PM