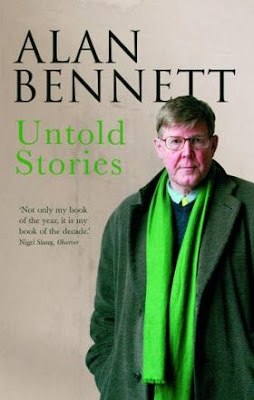 You may be aware - especially if you live in England - that the whole place is in the grip of terrible austerity drive, because of the GFC (“Global Financial Crisis” for anti-acronym types). One small - or big, depending on your priorities - fall-out from this austerity drive is the closure of many local libraries. Yes, sad, I know.

The local library in Primrose Hill is threatened. This means mobilisation by the locals, many of whom are (I’m told) both famous and well-heeled. Be that as it may, there is a vigorous Save-The-Library campaign underway, and they plan to re-open the place as a community (owned and run) library very soon. This of course needs funds, and so - to cut a long story short - that is how I ended up at a fund-and-awareness-raiser evening recently in a hall somewhere near Regent’s Park, with several hundred other people, to listen to Alan Bennett (Primrose Hill resident) read from his diaries - collected as 'Untold Stories'.

Alan Bennett is a multi-talented writer who has comedy, plays, novels, short stories and various ephemera to his credit. You might know him as the author of the hit play “The History Boys’, subsequently made into a film. The play drew on experiences of his younger self, and that of his friends, growing up in his native Yorkshire. Yes, he has a soft Yorkshire brogue, which - for some reason - adds to the gentle comedy of his readings. I was happy to find that he reads his work as marvellously as he writes it. The diary extracts with which he entertained the library-loving throng covered his childhood, career and personal moments in no particular order. All were delivered with immaculate comic timing and a gentle way of laughing at himself. No wonder he has had a lot of work as a narrator in addition to being a distinguished author.


My favourite story of the night? Asked to give a comment on Harold Pinter's 50th birthday, Alan couldn't think of anything suitable. But it later occurred to him that he might have suggested two minutes' silence. *rolls in the aisle in hysterical laughter*

As to Primrose Hill, it is a delightful village not too far from my neck of the woods (St Johns Wood, in fact). The Hill itself, although not exactly the North Col of Everest, nevertheless rewards a stroll to its summit with excellent views southwards across London. There aren’t too many high points in this city, and this is a pleasant one.


As to all those famous residents, Wikipedia gives a full list of past and present here, if you’re interested in celebrity-watching.

Or you could just buy the book. Also available: audio CDs.