Karel Čapek (1890 - 1938) was an influential Czech dramatist who was a pioneer of the science fiction genre. His play “R.U.R.” (1924) gave us the word “robot”, which was originally a Czech agricultural term for a peasant forced-labour system. Now there’s an interesting factoid for you to remember for the next trivia night. But we’re concerned today with his play “Věc Makropulos” (1922) which means literally “The Makropulos Thing”, though this doesn’t convey the real cryptic meaning of the Czech; so it is most usually translated as “The Makropulos Case” or sometimes “The Makropulos Affair”.

Čapek’s play may or may not have come to international attention on its own, but it has certainly done so since his countryman Leoš Janáček transformed it into an opera. The libretto of the opera closely follows the original play; and it is testament to Janáček’s skills that it is beautifully musical despite large chunks of it consisting of explanations of a complicated one-hundred year old legal case.

The opera is set in Prague in 1913. The first scene is a lawyer’s office - the current production at The Met includes a proscenium-high wall of filing draws *sigh* - and the second scene is an opera stage. The heroine of the story, Emilia Marty, is a famous diva. The final scene is a hotel bedroom...but I don’t want to give away the whole plot.

Wait...yes I do. Because I want to explain the science-fiction aspect of the story. Emilia Marty is also Ellian Macgregor. And Eugenia Montez. And a variety of other women with the initials “E.M.”. And - finally - is revealed as Elina Makropulos, born 337 years ago. She has retained her youthful beauty and allure, plus a wonderful singing voice, and has left a trail of lovers, children and destruction behind her. She is a bit of a bitch, but then who wouldn’t be in her circumstances? Her father was a chemist who developed the potion for Rudolf II, and was then forced to test it on Elina, his 16 year ld daughter. The potion only lasts 300 years or so, so Elina needs another dose soon.

The fast-moving plot revolves around her efforts to secure the formula, which is amongst the papers of an old lover (long since dead), whose estate is the subject of the long court case. Various intrigues occur, there’s a tragedy, and Emilia/Elina reveals all. She also decides that she doesn’t want the potion any more, and so she shrivels up, decomposes and dies. Now imagine that you’re a theatrical director and you need to portray that moment on stage. I’ve seen it done with a stand-in ‘ancient crone’ actress supplanting the soprano (who needs to keep singing all the while, remember). At The Met, the Elijah Moshinsky production goes for symbolism, with a huge portrait of Emilia Marty going up in flames - along with the formula.

As you might imagine from this description, the role of Emilia Marty is one of opera’s more demanding ones for the ‘dramatic soprano’. At The Met this season we’re privileged to see the Finnish soprano Karita Mattila in the role - she is acknowledged as one of the great “singing actors”, as the phrase goes. She does indeed prove herself one great actress; but her singing too is wonderful. As is Janáček’s lovely music.

So would you like to live for 300 years? It was thought, though he denied it, that Čapek’s play was a response to George Bernard Shaw’s “Back to Methuselah” (1921) where a 300-year life span is a good thing, raising humanity to a higher spiritual level. Čapek’s plays were written in the shadow of WWI where chemical weapons were used for the first time, and he seems to have developed a technophobe view of “progress”. As the program notes put it:

...a formula with seemingly utopian possibilities produces dreadful results and is eventually burnt by an idealistic young woman. 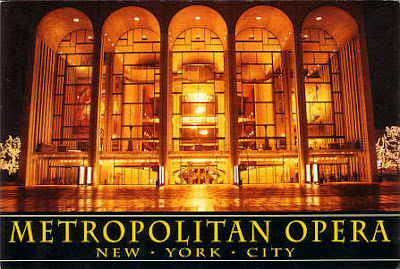 Information from The Met program
Images from:
http://www.metoperafamily.org/metopera/index.aspx
http://operalovers-ri.blogspot.com/
Posted by Annette Freeman at 5:05 AM