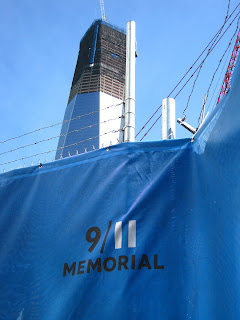 The new memorial  to the events of September 11, 2001 opened last year on the tenth anniversary of the tragedy. It took that long not only to clear the site, but also to agree on a design. The site is still the scene of building works. The tower that will be highest building - once again rising above the Empire State Building to be the tallest in New York City - is called (somewhat unimaginatively) World Trade Center One. The week I was in New York in April, the floor that took it just above the Empire State was put in place. It is a beautiful sky-scraper - architecturally much more beautiful than the blocky towers that were the original WTC.

But how to deal with the raw recent wounds of 9/11 and the footprints of the two WTC towers that came down? The new WTC One does not stand on the site of the lost towers. Nothing does. In those building footprints lie the remains of lost people and also a lot of angst and grief. Clearly it took the greatest design minds to come up with an answer to providing the people of NYC with something that would help them. Brilliant architect Daniel Liebskind oversaw the plans for the whole of the site, and the memorials themselves and their landscaping are the design work of Michael Arad and Peter Walker & Partners.

I went down to the off-site interpretative center to collect my entry ticket. Tickets are free but you must book ahead and have one. The authorities clearly expect large crowds - the crowd-control arrangements are formidable. However, I went along early in the day and walked in easily at my ticket-appointed time. The construction still going on down there means that there is no fancy entrance yet - you pick your way between cranes and hard-hats - and  the on-site museum is not yet open. Once on the site, I looked about and took in the park of newly-planted young trees - dozens of them - the fresh paving stones and new turf. I observed the “Survivor Tree” that, er, survived the blast, was recuperated in Central Park, and has been returned to the site. I had no prior information about what this Memorial consisted of, its design or its conceptual idea. I looked about me - a sign said “North Pool”, with an arrow. I followed its direction. Some kind of reflecting pool, I assumed.

The North Pool, when I found it, wrung a gasp from me. The “pool” is actually a massive rectangular water basin the precise size and location of the North Tower of the WTC. There is a corresponding “South Pool” on the footprint of the South Tower. Leaning over the basin edge, you can see a massive four-sided waterfall plunging 15 metres into what was the foundations of the building. The scale of the thing, the roar of the water, plus knowing that it covers, reverently, the precise location of the loss, is breathtaking. But even more moving is the smaller square hole in the very centre of the pool, where the water plunges even further into the bowels of the ex-building, giving a spooky impression of bottomlessness. It made my hair stand on end.

Once I got over the impact of the thing, I looked at the edge of the pool. Around it are engraved the names  of all who were lost. Movingly, they are arranged “by association” (as the interpretative brochure puts it): if people used to sit next to each other, or lunch together, or were friends, their names are grouped together. This was all worked out with the relatives of the lost. The firemen and rescuers who lost their lives are also memorialised here. The South Pool is precisely the same, though of course with different names.

Soon the trees will grow up and the park will be a shady and contemplative place. The sound of the rushing water, however, will always seem eerie. It will be a place for remembering, not forgetting.


Aerial Image from:
http://www.911memorial.org/design-overview
Posted by Annette Freeman at 9:25 AM