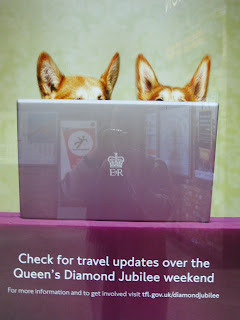 England has been awash with Union Jacks lately. Queen Elizabeth the Second celebrates sixty years on the throne this year - her Diamond Jubilee. Over a four-day weekend in June, the celebrations were afoot up and down the country: a ring of over 4,000 beacons was lit; a great flotilla of vessels, with the Queen and her family on a Royal Barge at the centre, floated down the Thames on a very rainy afternoon: quintessentially British. A concert was performed, fireworks exploded, a church service was held, luncheons and parades and speeches abounded. Throughout it all, the redoubtable 86-year-old remained her calm and regal self - even when her almost-91-year-old consort, Philip, was briefly hospitalised in the middle of it all (some say to avoid the pop concert).

For those of us who may admire Her Maj but stop short of overflowing royalism, the June long weekend in London was marked mainly by the unusual prevalence of the colours red, white and blue. People dressed in them, but principally they flew the red-white-and-blue flag. Oxford and Regents Streets were draped with the flag from end to end. Buildings fronting the Thames went all out with giant versions. Shop windows came up with ever-more ingenious displays. Princess Eugenie sported Union Jack fingernails.

As you’re all no doubt aware (and Wikipedia can fill you in if you’re not), the design of the Union Jack dates from the Union of Great britain and Ireland in 1801. It consists of the red cross of Saint George (the patron saint of England), edged in white, superimposed on the Cross of Saint Patrick (patron saint of Ireland), which are superimposed on the Saltire of Saint Andrew (patron saint of Scotland). What you may not appreciate - I didn’t until Wikipedia explained it - is that the Union Jack is not in fact completely symmetrical. Therefore, there is a right way and a wrong way to fly it. Yes, it is possible to get it back-to-front. So just watch out for that, won’t you, if you go flying the Union Jack during this year of celebration. 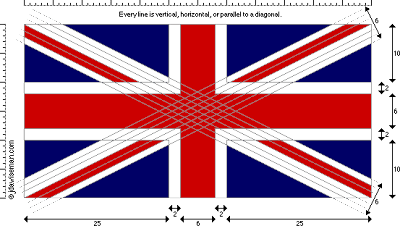 A couple of hours from London, but light years away, the flags were also flying on the Amalfi Coast. On the same weekend a once-in-four-years occasion was underway: the Regatta of the ancient republics. In medieval times the four great Maritime cities of Venice, Pisa, Genoa and Amalfi vied for dominance of the Mediterranean. These days, the great sea battles are corralled somewhat into a sporting regatta, using replicas of the long rowing boats of the heydays of the Republics. The same four cities take part, and each year the Regatta rotates from one to the other. This year was Amalfi’s turn again.


As the Amalfi Coast website explains, the Regatta has been a feature since the 1940s:

The Regatta of the Ancient Maritime Republics is a sporting and historical rievocation under the patronage of the Italian Republic President. In the Regatta four crews challenge in representation of the ancient Italian Maritime Republics of Amalfi, Genoa, Pisa and Venice. It happens every year, usually in June, and it's done each year in a different city. The real competition is preceded by a historical procession, during which you can see unthread along the roads of the organizing city some actors dressing the ancient characters cloths that characterized every republic.

And who won, I hear you ask? Amalfi! Yes, the hometown team beat Venice in an exciting finish to the final race, by a nose, so to speak.

Meanwhile, back in Britain, I see that no-one has taken down the flags. They are presently doing duty as reminders to support England in the Euro Cup football games, and I guess they will all be fluttering through July and August as the Olympics comes to London. It is certainly a summer for flag flying. 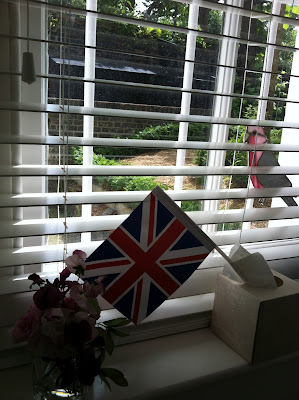 Flag image from:
http://www.jdawiseman.com/papers/union-jack/union-jack.html
Posted by Annette Freeman at 11:16 AM