You know that a night in the theatre hasn't really worked when the program notes are more interesting than the play. Michael Frayn's "Democracy", written in 2003 (and performed in Sydney by the STC in 2005) has been revived this year and is presently playing at The Old Vic. It is, famously, a play about men in suits, dense with complicated political detail from the 1970s. However despite - or perhaps because - of this, I found it a struggle to stay awake. Some of the lines were memorable in a self-conscious kind of way, but their enunciation - German politicians with distinctly English accents - was often unclear. Until the slower paced, more personal second half, it was an effort to work out what they were saying, who was who, and what was going on.

Fortunately, the program contained several interesting articles, including one by Neal Ascherson, which explained the sad and heady times in German politics which followed its defeat in WWII and the end of Nazism. At the end of 1945, the defeated German people were cold, hungry and homeless. The country was divided into four zones controlled by the four Western allies, Britain, America, France and Soviet Russia.  Well, that was never going to work for long, and so it proved. Soon the Western democracies started to fear infection from Communism, and a fateful line was drawn through Germany, dividing it into the West and the East.

West Germany elected Adenauer as its Chancellor, and adopted a number of poorly-thought-out policies which kept the two halves isolated from each other. For a start, as Ascherson explains:

West Germany claimed to be the only legal German state under the frontiers of 1937. In other words, Bonn held that the eastern provinces annexed by Poland and the Soviet Union after 1945 were still rightfully German, even though their German population had fled or been expelled. Although nothing short of a third world war could regain these territories, West German television news continued to forecast the weather in Silesia and East Prussia. This claim handed the Communist regimes in east-central Europe their only telling domestic argument: that without the Soviet alliance the Germans...would come marching back. 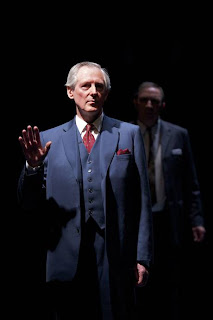 Despite its isolation - it refused to have diplomatic relations with any country that recognised the GDR - West Germany powered on to an economic resurrection. The Berlin Wall went up in 1961. It wasn't until Willy Brandt became Chancellor in 1969 to 1974 that any real moves were made towards reunification. Although it would not be until Kohl's Chancellorship in 1990 that the wall would come down and reunification happen, Brandt is credited with taking the first steps in that direction. He was a popular Chancellor, and promoted a policy of Ostpolitik - an Eastern policy - signing treaties of reconciliation with Germany's eastern neighbours, and making tentative moves towards the GDR.

But the play centres on the incident that triggered Brandt's downfall - the so-called Guillaume Affair in 1974. Gunter Guillaume was a minor functionary who became Brandt's personal assistant; but it turns out he was a spy, a member of the  GDR foreign Stasi. Thus we have themes of duplicity, being torn between two sides, dissembling, and similarities in the characters and lives of the two men. It has the potential to be more interesting than it has turned out.

Mention of the difficulties of coalition governments and duplicitous politicians raised some knowing titters from the audience, reminded presumably of contemporary British politics; though really, 'twas ever thus.

Here's  a commentary. And here's a review.

Posted by Annette Freeman at 5:54 PM