The beautifully proportioned medieval Salisbury Cathedral has been described as "like an intricate casket on a carpet of mown grass". I wish I could come up with lines like that. It is certainly a very apt and evocative description of the lovely building, which sits in the largest open Close in England. The cathedral is particularly homogenous and well-proportioned because it was built "all in one go", over fifty years, not in added-on bits and pieces over centuries.

Its most famous feature is its spire, at 123 meteres the tallest spire in England. It is also Europe's tallest medieval spire, and is a thing of beauty, spiking up slenderly into the sky - which was miraculously blue on the day of our recent visit. The spire is unusually constructed. It is based on an interior of wooden scaffolding, which remains inside it today. The load of the spire - all 6,400 tonnes - is borne by four central piers, internal stone buttresses, and strainer arches added in the fourteenth century to prevent the great arches collapsing inwards. 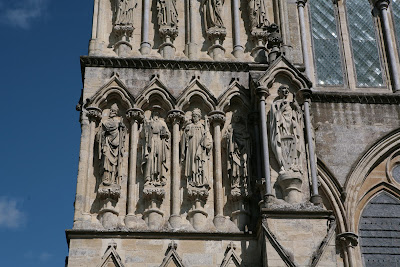 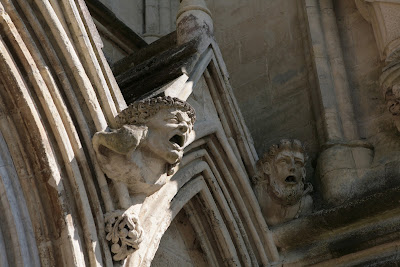 The building was begun in 1220 and its first chapel, called Trinity Chapel, was completed in 1225. Today Trinity Chapel is adorned with a striking vivid blue stained glass window which was added in 1980. It is by Gabriel Loire of Chartres and is known as the "Prisoners of Conscience" window. The Cathedral also has a serene and beautifully proportioned cloister, though Salisbury was never a monastic site. We visited Salisbury Cathedral in time for Evensong one Thursday afternoon. The choir of Chichester Cathedral were singing. Sitting with the afternoon light streaming through the transept windows, the boy sopranos' voices echoing in the medieval vaulted roof, the simplicity and clarity of the Cathedral were soothing and meditative. Just as a Cathedral should be, in fact.

Salisbury has another new feature - a fabulous font installed in 1980 and designed by William Pye. It is a massive water-filled urn which spills from its four corners, adding the faint sound of trickling water to the meditative atmosphere. Salisbury if alos the resting place of former Prime Minister of Great Britain, Edward Heath. 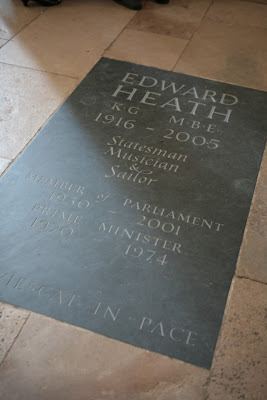 Salisbury also has another old feature - one of the four extant originals of the Magna Carta (for the trivia aficionados amongst you, the other three are in The British Library, Westminster Palace and Lincoln Cathedral). Salisbury displays its copy, which does not boast a seal but is clear and legible, in the Cathedral's Chapter House.

Posted by Annette Freeman at 4:26 PM