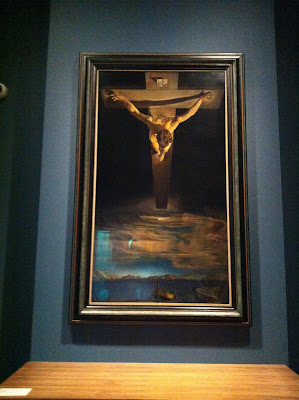 It’s not quite what you’d expect to find in a provincial museum in Scotland’s second city. But the Glasgow museum director who decided to buy, at great cost, Salvador Dali’s “Christ of St John of the Cross” in the early 1950s made a canny decision. It has been quite a draw-card for what is now the Kelvinwood [correction: 'Kelvingrove'] Museum, despite the marches in the street to protest the purchase at the time.

Dali’s “Christ” is remarkable and interesting for several different reasons. To start with, Dali was an avowed atheist (at the time - it’s complicated). Why did he choose a religious figure, and such a powerful image central to Christianity?

The angle of the figure of Christ is the first and most striking feature of the work - we look down on the bowed head of Christ on the Cross. A little history helps to explain this: Dali based his painting on a sketch by an early monk named St John of the Cross - hence the name he gave it - which looked at Christ’s figure from a similar angle. Though in Dali’s case, his Christ is not actually attached to the Cross - there are no nails or ropes.

There is also an obvious triangular composition in the figure, with the head at the lower corner of an inverted triangle. Dali himself can be seen in film clips pointing this out. He said that he had a dream of the composition of an atom - the Surrealists were fascinated by quantum physics and the then-new discoveries about sub-atomic particles. In Dali’s dream, he saw the atom as triangular, with the nucleus as a spot int eh lower part of the triangle. He drew some sketches of this.  He then made some kind of logical leap from the sub-atomic particle to the “essence of life” and thus to the Christ. That bit was a little too surreal for me. 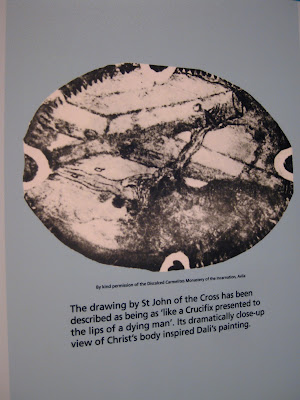 To get the anatomy right for his Christ at an unusual angle, Dali hired a muscular model - a Hollywood stunt man, in fact, who later went on to become one of the Venice Beach muscle men who teach bodybuilding on the sands in California. The landscape in the lower portion of the painting - can we call it foreground? - is based on Figuroes on the Catalan coast, where Dali lived. It is a fishing village - thus referencing the Palestinian fishermen of Jesus’s time.

So far, so interesting. Then in the early 1960s, someone took objection to the painting. A young man was seated, looking at the painting, when he suddenly leapt to his feet, burst through the flimsy barrier in front of the painting, and threw a chunk of sandstone (which he had smuggled in) at the canvas. It tore a hole in it, which he made larger by grabbing it with his hands. Fortunately the damage happened to the lower part of the painting, and didn’t affect the central figure. Also fortunately, the then conservator of the museum and his team were able to make very good repairs, though it wasn’t easy because the canvas Dali used was very thin, and he applied only a thin layer of paint, not a thick impasto. When the canvas was torn, the tension it had from being stretched on its frame was lost, and it wasn’t possible to get the edges to meet again. Various clever techniques were used to repair it, and although today you can see where the tears occurred (if you know to look) it really doesn’t affect the painting. It is said that the perpetrator suffered from delusions that he was in fact Christ, and that he didn’t approve of the manner in which Dali had portrayed ‘him’.

So Dali’s “Christ” is very adventurous, from a number of perspectives. 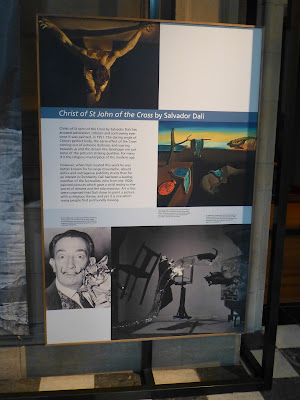 Posted by Annette Freeman at 11:25 AM