The Cherubs Are 500 This Year.


It is the 500th anniversary of Raphael's 'Sistine Madonna' this year - 2012 - and at it's home in the Dresden Gemäldegalerie Alte Meister (Old masters Gallery) they are having a party. Well, ok, not a party - but an exhibition, to celebrate. They have other Raphaels, they have paintings which have reference the Madonna, and they have an extensive array of all those bits and pieces which have adopted - fondly, as well as commercially - the two little cherubs which grace the foot of the painting.


I am certain that even if you have never heard of the Sistine Madonna, even if you have never heard of raphael, it is highly probable that you have come across these two little cherubs. They have winged their way from Raphael's masterpiece and taken flight into all kinds of improbable places. They appear in advertisements, on postcards and calendars, on mugs and key rings. There's something about them that managed to capture the imagination.

But don't neglect the Madonna. She is very lovely herself. There are also some endearing if not puzzling details to Raphael's masterwork, not least the fact that he chose to place his Madonna, and her cherubs, in front of a green curtain that sags on a wonky curtain rod. Some reproductions of the Sistine Madonna omit the curtain rod, but let's not interfere with Raphael.


The painting itself has had an adventurous life, having to to be hidden away in a cave during the Second World War. She was saved from destruction in the hideous fire-bombing that destroyed dresden and thousands upon thousands of her inhabitants in 1945. Then there was some thought that the Stalinists - Dresden became part of East Germany after WWII - might have hoped to keep her for themselves. She was however returned to East Germany, but controversial claims were made that she had been damaged, or at least left to her own devices in the dan cave somewhere. 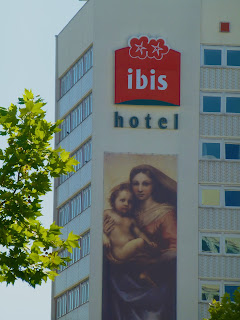 Sistine Madonna was rescued from destruction during the bombing of Dresden in World War II, but the conditions in which it was saved and the subsequent history of the piece are themselves the subject of controversy. The painting was stored, with other works of art, in a tunnel in Saxon Switzerland; when the Red Army encountered them, they took them...

In 1946, the painting went temporarily on restricted exhibition in the Pushkin [Gallery], along with some of the other treasures the Soviets had retrieved. But in 1955, after the death of Joseph Stalin, the Soviets decided to return the art to Germany, "for the purpose of strengthening and furthering the progress of friendship between the Soviet and German peoples."

There followed some international controversy, with press around the world stating that the Dresden art collection had been damaged in Soviet storage. Soviets countered that they had in fact saved the pieces. The tunnel in which the art was stored in Saxon Switzerland was climate controlled, but according to a Soviet military spokesperson, the power had failed when the collection was discovered and the pieces were exposed to the humid conditions of the underground. Stories of the horrid conditions from which the Sistine Madonna had been saved began to circulate.But, as reported by ARTnews in 1991, Russian art historian Andrei Chegodaev, who had been sent by the Soviets to Germany in 1945 to review the art, denied it:

It was the most insolent, bold-faced lie.... In some gloomy, dark cave, two [actually         four] soldiers, knee-deep in water, are carrying the Sistine Madonna upright, slung on cloths, very easily, barely using two fingers. But it couldn’t have been lifted like this even by a dozen healthy fellows . . . because it was framed. . . . Everything connected with this imaginary rescue is simply a lie.

As to the two little winged cherubs which have winged their way out of the painting and into legend themselves, Wiki also reports on them:


According to a 1912 article in Fra Magazine, when Raphael was painting the Madonna the children of his model would come in to watch. Struck by their posture as they did, the story goes, he added them to the painting exactly as he saw them. Another story, recounted in 1912's St. Nicholas Magazine, says that Raphael rather was inspired by two children he encountered on the street when he saw them "looking wistfully into the window of a baker's shop."

You can read about the Exhibition at the Old Masters Gallery here.

Five hundred years ago Raphael, the great master painter of the Renaissance, was commissioned by Pope Julius II to paint the Sistine Madonna. Today, it is one of the most famous works of art in the world. It belongs to the Gemäldegalerie Alte Meister in Dresden; even those who are unaware of this fact are at least familiar with the two angels that perch cutely at the lower edge of the painting and have been copied countless times.

To mark the 500th birthday of this altarpiece, the Staatliche Kunstsammlungen Dresden will be holding a major anniversary exhibition. The five hundred years of the Sistine Madonna have been characterized by exciting stories involving secret negotiations and illustrious display, periods of obscurity and international acclaim, artistic inventiveness, and abysmal kitsch.


And if you doubt that bit about "abysmal kitsch", just check out this video of the cherubs rendered in toasted bread. I rest my case.