In Berlin there is a jolly big guy who just can’t stop collecting Trabants, He has about 140 of them. What are they? Little cars that were built in East Germany during its Soviet days, and bought and driven by East Germans. They are cute, but why would you want 140 of them? It seems that to ask such a question is to miss the point of the Trabi cult. The jolly chap in question has at least found a way to justify his fetish, by taking tourists out on Trabi safaris. The tourists pile into the Trabis and set out in convoy, with a driver in front guiding the route, and one giving a commentary over a walkie-talkie arrangement. 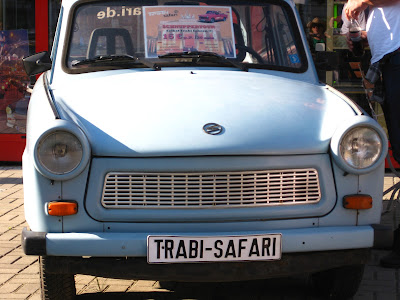 But really, if you choose a Trabi tour, you’re not really there for the commentary. Drivers are given a quick lesson in driving a Trabi, and it doesn’t seem to be hard (though I hasten to assure you that I went Trabi touring as a passenger, in a converted open-top Trabi).

The cars have two-stoke engines - heavens! That’s a lawn-mower engine! They smell a bit like lawn-mowers, and sound like a Harley-Davidson with a head cold. They chug along quite OK, if you are a passenger, though drivers report a unique experience. In the days of the GDR, acquiring a Trabant motor vehicle was a matter of putting your name on a waiting list. It could take from eight to fourteen years to receive your car, with an average wait of twelve years. It cost about fourteen thousand East German Duetschmarks (equivalent of about eighteen thousand Euros today) - not as cheap as a lawn mower.


The Trabant fashion fetish is part of a current interest in the retro design of the old GDR days. Take my Berlin hotel of choice on this visit: the Ostel Hostel. A wonderful re-vamp of a GDR apartment block, it is decorated with 1970s furniture, wallpaper and objects. Stepping into a room there is like stepping into 1973, with not a single modern note to correct that impression. Amazing design job! 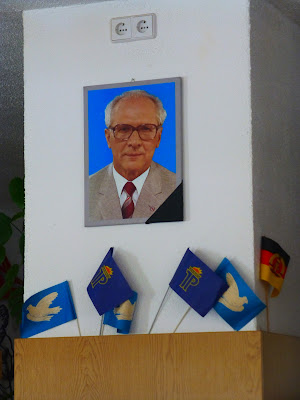 And right around the corner is a vestige of the Berlin Wall - the longest surviving stretch of Wall, these days painted by invited artists, to make the ‘East Side Gallery’. And yes, there is a painting of a Trabant. 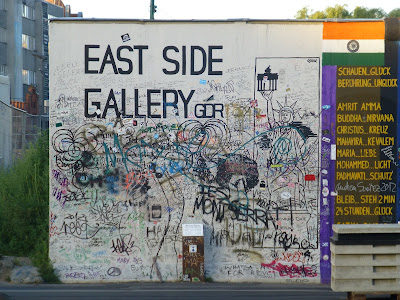 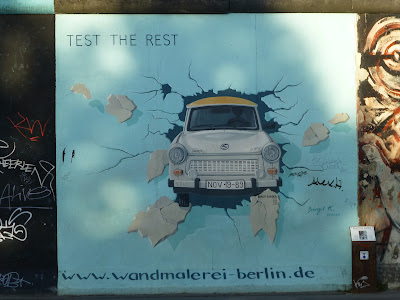 Posted by Annette Freeman at 10:08 PM