Wherever I find myself these days, possibly the most important anchor I seek out is the local café. A good café is a haven, a resting spot, and observation post; it provides people-watching, culture-absorbing experiences, and with any luck a great cup of coffee. When I first began to spend time in European cafés, I'd get a little impatient when the waiters seemed to ignore me, to take ages to bring the bill, to act as if I were invisible. Then one day the penny dropped -- that's the whole point of the European coffeehouse: you can occupy your seat unmolested all day if you like. For the price of a cup of coffee, as Stephan Zweig says: 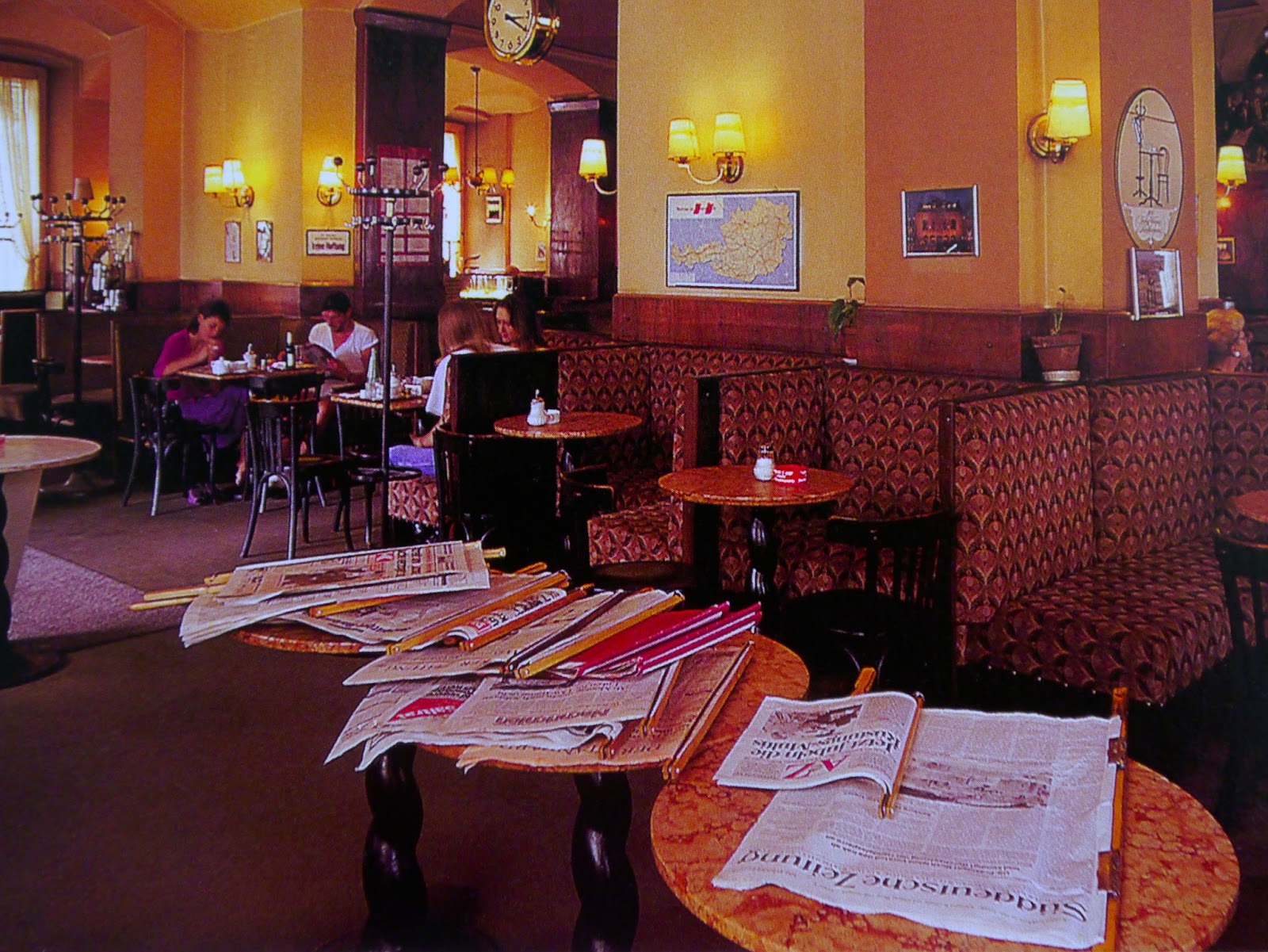 It must be said that the Viennese coffeehouse is a particular institution which is not comparable to any other in the world. As a matter of fact, it is a sort of democratic club to which admission costs the small price of a cup of coffee. Upon payment of this mite every guest can sit for hours on end, discuss, write, play cards, receive his mail, and, above all, can go through an unlimited number of newspapers and magazines.- 'The World of Yesterday', Stefan Zweig


The Viennese coffee house is a benchmark. In the cafés of this elegant and cultured city of the 700-year old Hapsburg empire, in the days before the world wars and the truncating of Austria, many of the great artists and thinkers of the day were meeting, growing up, arguing and collaborating in its coffeehouses.

Writers such as Schnitzler, Hofmannsthal and Beer-Hofmann preferred the Café Griensteidl. Though it's been made over a few times, you can still visit this re-born classic coffee house. The same applies to Café Central, with a grand interior which attracts coffeehouse tourists. In the past, Altenberg, Kraus and Polgar could be found in the Café Central, and according to its website:


This famous traditional café with its 130 year history was first opened in 1876 and at the turn of the 20th century it was a popular meeting point for leading lights in the world of art, literature, politics and science such as Arthur Schnitzler, Sigmund Freud, Peter Altenberg and Leo Trotzki.


In reality the Café Central is not a coffeehouse like the others, but a world view, one which in its innermost core refuses to view the world...The Café Central lies under the Viennese latitude on the meridian of loneliness. Its inhabitants are for the most part people whose misanthropy is as strong as their longing for other people, people who need company in order to fulfil their desire to be alone. (Alfred Polger, 'Theory of the Café Central')

Today the coffeehouse tourists order scrumptious Viennese pastries and sit for a while to study their guide books and city maps. 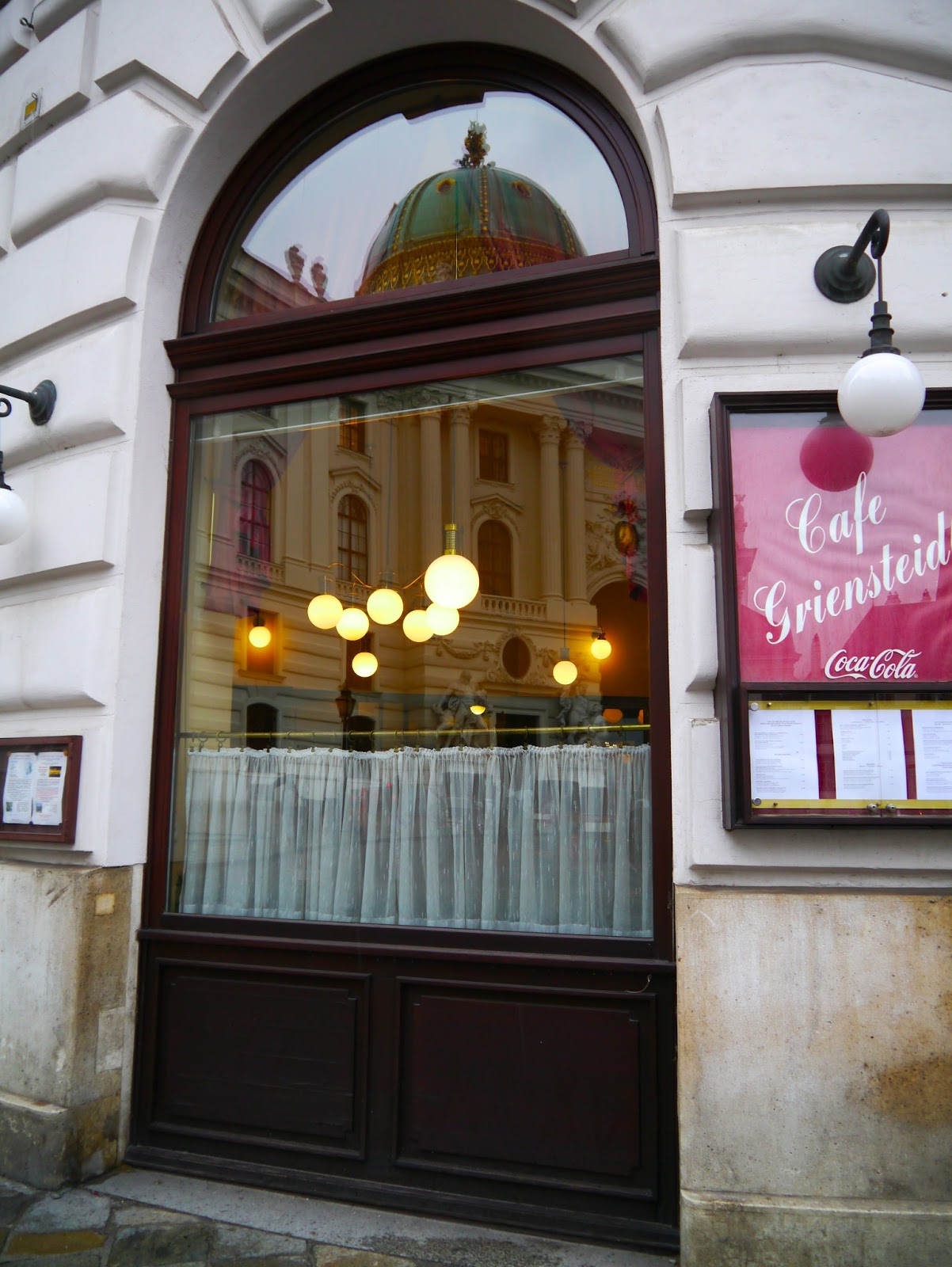 Sculptors, architects and painters of the Secession and the Hagenbund met in the Café Sperl; Broch, Musil, Werfel and Roth in the Café Herrenhof.

In 1857 there were already one hundred coffeehouse in Vienna. Those on the Ringstrasse were meeting places for Sunday strollers, and there were suburban coffeehouses for day trips. They served as salon and gambling den, office and concert hall. You could spend the whole day reading the newspapers there.

It was a familiar scene to see someone sitting for hours over a 'Kleinen Braunen' (small mocha with cream).


Demel has another beautiful interior, with a pastry kitchen producing Viennese yummy things not only for its own café but also for sale in other outlets, including airport shops. Here, however, you may find yourself queuing for a seat with other coffeehouse tourists, and rushed by harassed wait staff, which is not the true, leisurely, coffeehouse experience. After all, you don't come just for the coffee.

In Vienna, the coffeehouse is an ingrained tradition, and you don't need to restrict your search for the perfect haven to the historic establishments of the old days. Though I visited Griensteidl, Central and Demel, I found my favourite in a modern café-restaurant on the Hoher Markt called Joma, off the main tourist trail and frequent by local office workers. It has friendly wait staff, English menus, excellent coffee (sometimes presented with whimsical froth designs), good light food, wi-fi, newspapers...and they let you sit as long as you want. All the ingredients -- I wonder who amongst the modern-day clientele is writing poetry, composing music or a political manifesto? Maybe no-one -- but they could do it here, if anywhere.


Posted by Annette Freeman at 7:46 PM