Would You Do This?

The tourists on Santorini were flocking to have their feet nibbled by tiny fish. One establishment billed itself as 'Doctor Fish' and its logo was a smiling fish in a nurses' hat. A few Google clicks later and I learnt that the fish themselves - a Turkish variety - are called 'doctor fish'. The spa girls assured us that the fish have no teeth, and this is right - they're toothless. The species' correct name is 'garra rufa'. I also learnt (from Wikipedia - what would we do without it?) that:


Doctor fish is the name given to the species of fish Garra rufa. Other nicknames include nibble fish, kangal fish... Garra rufa is called the reddish log sucker. They live and breed in the pools of some Turkish river systems and hot springs. Modernly, they have been integrated as a spa treatment, where they feed on the skin of patients with psoriasis. While the doctor fish treatment has been shown to alleviate the symptoms of psoriasis,[5] they are not meant as a curative treatment, as no cure for psoriasis currently exists. The use of the fish as a spa treatment for the wider public is still widely debated on grounds of efficacy and validity, as the treatment is not shown to have either positive or negative effects.

In addition to eating the dead bits on your feet, the little garra rufa are also have an enzyme in their saliva, diathanol, which is thought to heal conditions such as psoriasis and eczema (source).

Not bothering about the question of positive or negative effects, my adventurous companions both subjected themselves to the attentions of the tiny suckers. One was initially overcome with the ticklish sensation and spent a few minutes laughing; the other found the experience soothing. Both reported feet that felt clean and soft. 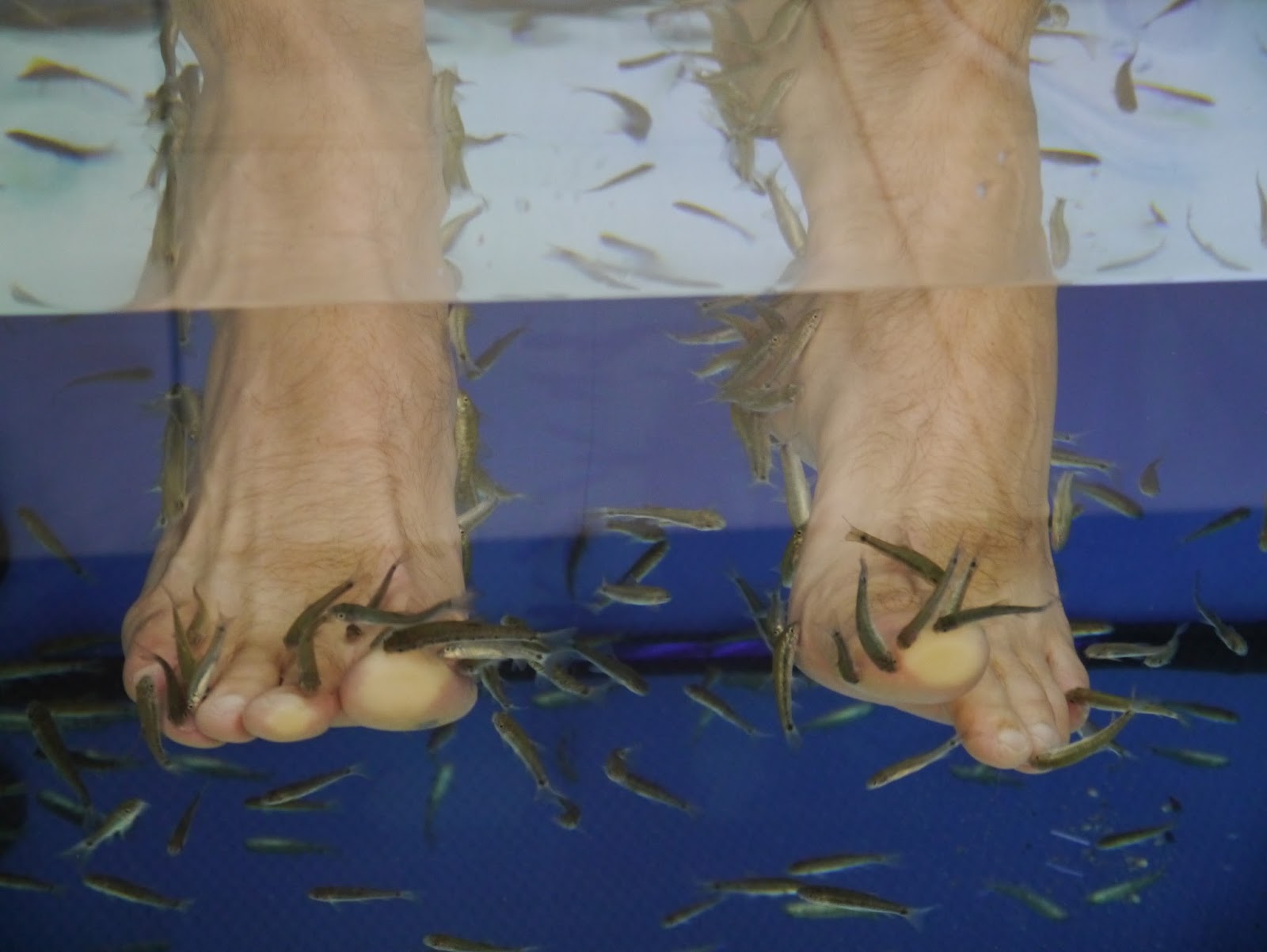 It seems that 'fish spas' are presently banned in the USA, due to health concerns -- spas are supposed to discard or sterilise the 'equipment' they use for pedicures, and the little fish are a bit expensive to replace between nibble sessions. Wiki says:


The practice is banned in several of the United States and Canadian provinces as cosmetology regulators believe the practice is unsanitary, with the Wall Street Journal claiming that "cosmetology regulations generally mandate that tools need to be discarded or sanitized after each use. But epidermis-eating fish are too expensive to throw away"....TV journalist John Stossel has ridiculed state laws against fish pedicures, arguing that they represent a case of the government becoming a "Nanny State", where individuals no longer can make their own decisions about their well-being. He participated in an illegal fish pedicure on his Fox Business Network program to illustrate his point.

Fish politics! But there are plenty of scare stories in the media warning that the little fish, nibbling a variety of different feet, could pose health threats. These dire predictions were not bothering the customers on Santorini.

This WebMD article sorts some of the hysteria from the facts and advises that the risk of infection is low:


The risk of infection associated with Garra rufa fish pedicures is likely to be very low, according to experts from the Health Protection Agency. In October 2011 it issued updated advice on fish spas following an investigation.
Fish tank water may contain a number of microorganisms. So there is the potential to catch a range of infections, either from fish to person, water to person or person to person passed on by the water or the fish.  However, the HPA says the overall risk of infection is likely to be very low, if the spa operates good standards of hygiene.
However, it advises people with weakened immune systems or underlying medical conditions, including diabetes and psoriasis, against using fish spas. It says people with these conditions are likely to be at an increased risk of infection.
People with cuts or infections on their feet should allow them to heal before seeking fish spa treatment, and it is advised to wait at least 24 hours after having a leg wax or shaving before having a fish spa treatment.

The tanks at 'Doctor Fish' in Fira and 'Kissing Fish' in Oia on Santorini - yes, we tried out two places - advertise that there are 200 fish in their tanks. I read a little further through the Wiki article, and discovered that in some fish spas the tanks have hundreds of fish; and at one spa in Croatia, the fish are used to cleanse the bathers. The 'Doctor Fish' establishment in Fira did advertise a tank downstairs where your were invited to fully immerse yourself in fish (in your swimmers - I'd suggest tight fitting ones!) but we weren't tempted.

You may be wondering why the fish nibble your feet so actively, and what they eat in the wild. I did - so back to Wiki:


...the skin-feeding behaviour fully manifests only under conditions where the food supply is somewhat scarce and unpredictable. During their activities of foraging they slough off dead skin. They are simply looking for food which in the wild consists of 'aufwuchs'. In both marine and freshwater environments the algae – particularly green algae and diatoms – make up the dominant component of 'aufwuchs' communities. Small crustaceans, rotifers, and protozoans are also commonly found in fresh water and the sea, but insect larvae, oligochaetes and tardigrades are peculiar to freshwater 'aufwuchs' faunas.

So when there is no algae about, and tiny crustaceans and protozoans are in short supply, the doctor fish will eat your dead skin cells instead. I can only speculate as to whether there is some nutrition in that for them. But apart from their diet, animal welfare groups have expressed some concerns, particularly about fish deaths: "fish are animals too":


Animal rights groups have also voiced alarm over the conditions in which the fish are kept. "We do have concerns about the welfare of any fish involved in this practice," a spokeswoman for the RSPCA told the Observer. "Fish are covered by the Animal Welfare Act. They need a stable environment, with the correct water quality and temperature range. Sudden changes in temperature should be avoided as they can severely compromise welfare and even kill the animals. Water quality is of paramount importance in maintaining healthy fish. Having people bathe in the water with the fish is likely to affect quality, particularly if they are wearing any lotions or other toiletries that could leach into the water. Similarly, chemicals used to disinfect tanks and to clean patients' feet beforehand would have to be non-toxic to the fish." (source)

The government of Turkey has now made the garra rufa a protected species over concerns about over-exploitation by spas. This will no doubt ensure that they are costly to acquire, and therefor will be given careful treatment by their owners. As far as I'm aware, the garra rufa don't die in the process of eating your feet. In fact, from observation, they seem very keen. Or hungry, anyway.

It's unlike me to post anything about 'celebrities' I've barely heard of (this is definitely a first for this blog) but here's a short but ridiculous video you might enjoy of a 'celeb' enjoying (or not) a fish spa in the Kissing Fish establishment which we visited in Oia.

I leave you to make up your own mind.

Posted by Annette Freeman at 12:03 PM