When Pope Benedict XVI resigned there were news reports that he had spent some time contemplating at the tomb of the only other Pope ever to have resigned on his own initiative, Celestine V in 1294. Celestine’s remains are in the Basilica Santa Maria di Collemaggio in L’Aquila in Abruzzo, central Italy, a city which was seriously damaged by an earthquake in 2009. Wiki reports that:


Celestine's remains survived the 2009 L'Aquila earthquake with one Italian spokesman saying it was "another great miracle by the pope". They were then recovered from the basilica shortly after the earthquake. While inspecting the earthquake damage during a 28 April 2009 visit to the Aquila, Pope Benedict XVI visited Celestine's remains in the badly damaged Santa Maria di Collemaggio and left the woolen pallium he wore during his papal inauguration in April 2005 on his glass casket as a gift. (source)

Celestine was born Pietro Angelerio, and became a Benedictine monk when he was 17. He turned out to be a dedicated ascetic, and went to live as a solitary hermit on Mount Morrone, outside of Sulmona in Abruzzo. He thus acquired the nickname ‘Peter of Morrone’. These mountains may be contemplated by today’s visitor to Sulmona - they’re visible from Piazza Garibaldi downtown. We’ll leave Celestine there -- except to say that he found even Mount Morrone too comfortable, and went to live in an yet more remote cave on the Mountain of Maiella in central Abruzzi, from which he was somehow able to found the Celestine Order of monks, and to become Pope for a few months, from July to December 1294, before that historic resignation.

The Abruzzi mountains are part of the earthquake-prone Appenines, and include the highest mountains in Italy. The Corno Grande of the Gran Sasso tops out at 2912 m ASL. While today the mountains attract mountain climbers and skiiers, in medieval times they attracted hermit monks. The region is scattered with the remains of small eremos, or hermitages, where ascetic religious types chose to spend their physically difficult but presumably spiritually soothing days. 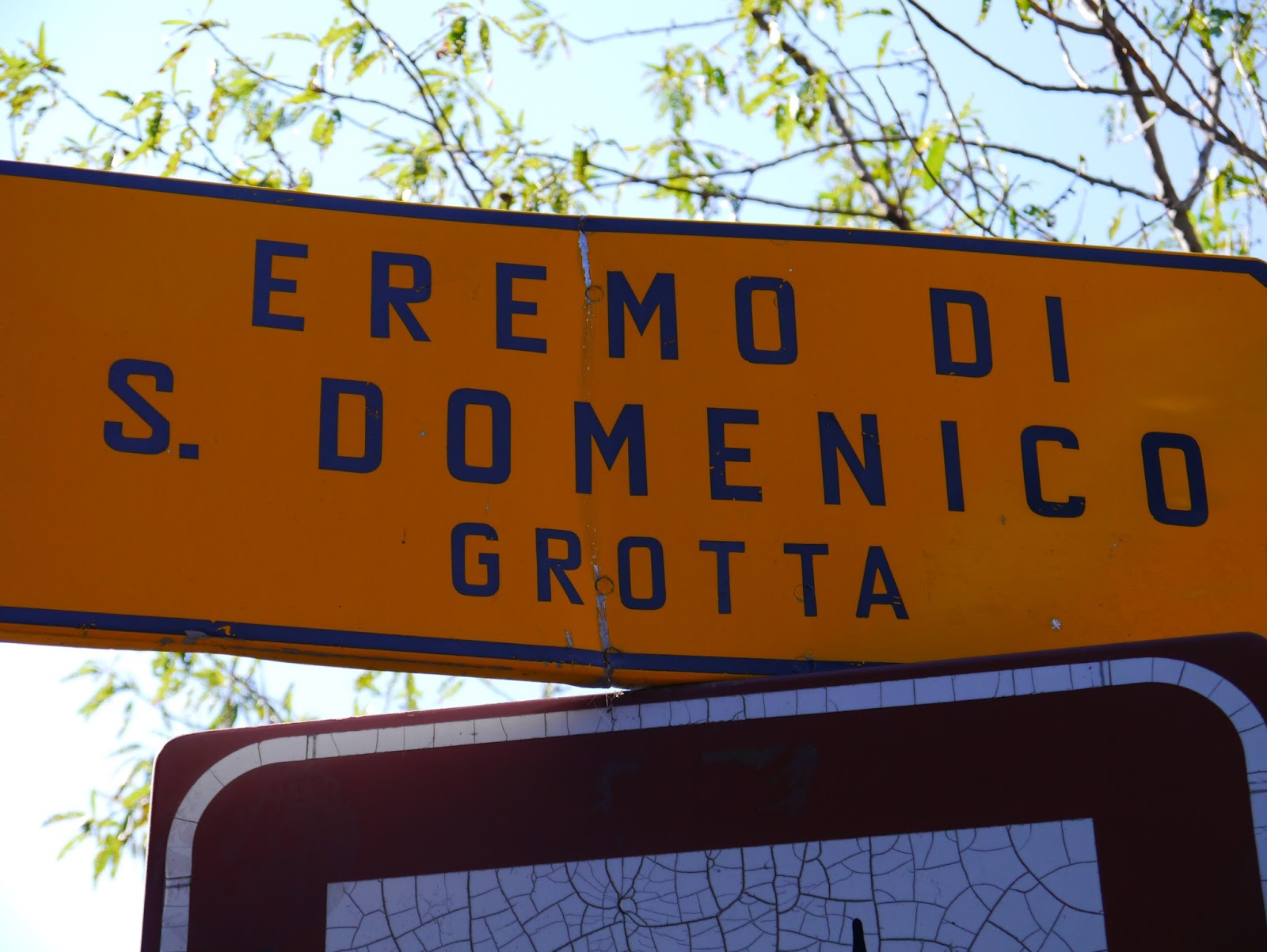 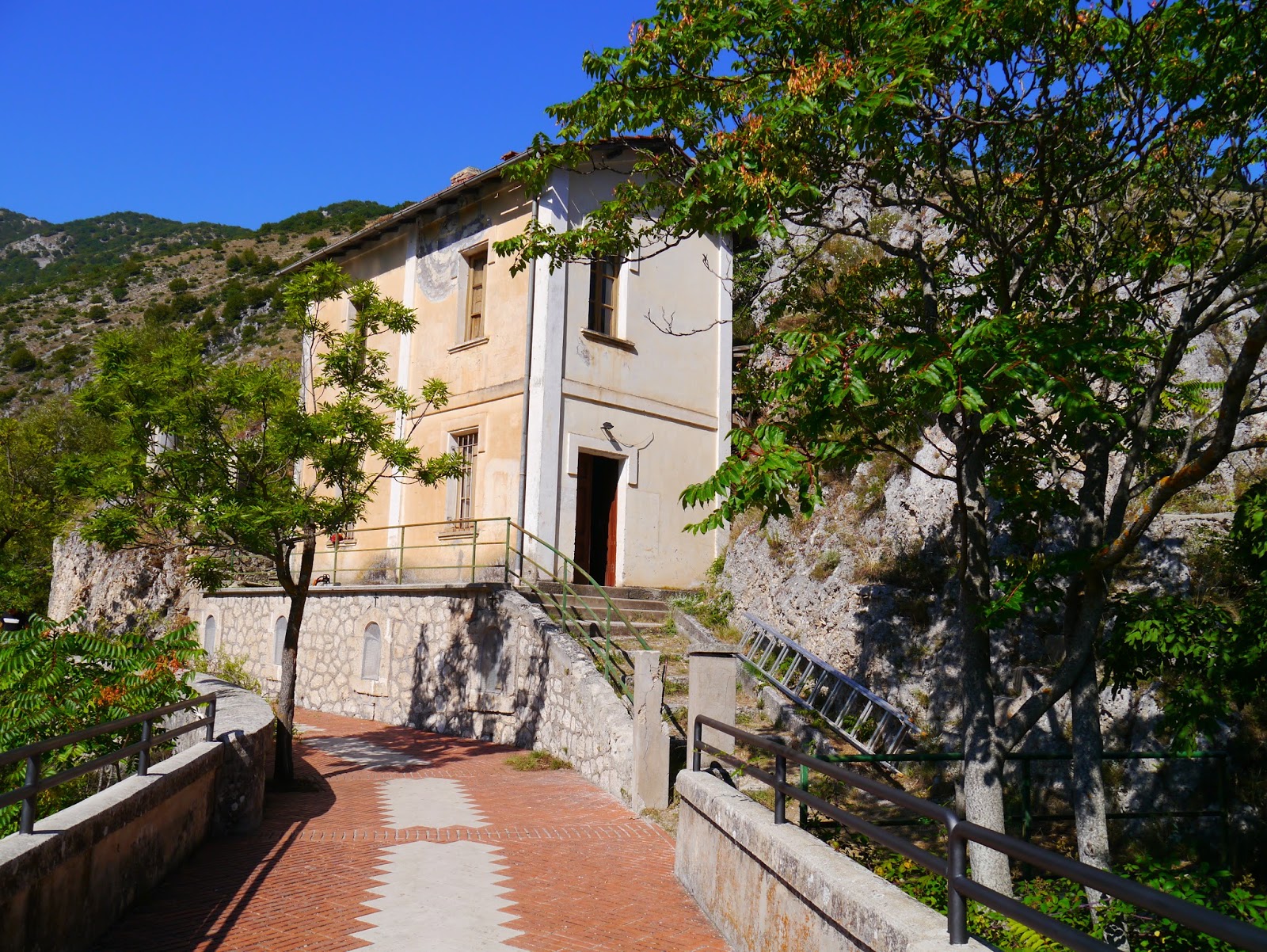 In the hidden Valle di Sagitario near the village of Villalago is a small building housing a now-decrepit chapel. It marks the site of a limestone cave where, according to tradition, the monk San Domenico lived in about the year 1000. This source gives this interesting information (which may have suffered a little in the Google translation):

In the main church of Villalago there is a rest of the wooden bed where it is believed St. Dominic mused in his hermitage. Here there is also preserved a molar that the saint gave to the inhabitants of Villalago as a sign of its passage.

Today the eremo site provides a quiet welcome to a small reserve and grotto on beautiful Lago San Domenico. It’s also the final destination of an 80 km pilgrimage of the faithful, up to 300 of whom walk from Fornelli in the province of Isernia each August.


On a somewhat grander scale, in the mountains of Umbria near the village of Piedivalle, there is the Abbey of Sant’ Eutizio. Both St Benedict and St Francis are connected with this site, and it's considered one of the most important for western monasticism. It has its beginnings in the fifth century, when hermits took up residence in caves which they dug out of the hillside. St Benedict was born nearby, in the town of Norcia. One of the founders of the monastic community, Santo Spes, was his teacher and spiritual father, and he visited the hermitage frequently. Saint Francis (of Assisi fame) is said to have stopped by the monastery to investigate the surgical skills of the monks. S. Spes was succeeded by Sant'Eutizio who built the fifth century community. The church was built in his honor. He died on 23 May 540 and his remains were laid in the church. He was a very important figure for the community, called “the evangelizer of the valley”, and the complex is named after him.

After centuries of history, the Abbey was abandoned in the 1950s and its moveable treasures taken to Rome for safe-keeping. But there’s an inspirational story that follows:


Fundamental to the return to life of this abbey was the work and dedication of a priest of the diocese of Spoleto-Norcia, Don Fabrizio Proietti, who in the mid-80s, not yet thirty years old, asked and obtained permission to settle in the structure, cleaning with the power of his hands most of the complex. He attracted the attention of the surrounding community and institutions, attracted investments and private donations, also involving Catholic associations from all parts of Italy. He offered the Abbey as a destination for labor camps, offering hospitality in exchange for help to restructure the settlement, and empty the immense underground space which in the last two centuries had been used as a dump.

He founded a small monastic community of inspiration, bringing to life the daily liturgy according to the Benedictine rule, and in a few years he was able to "resurrect" the abbey, getting from the Library of Rome Vallicelliana the return of part of the artistic treasures, including the chalice and the breviary of St. Carlo Borromeo, and creating the Museum and the Library of the Surgical School of Preci, allowing thousands of people to learn about the abbey.

Despite his untimely death, at the age of 42, in 1998, the Abbey has been throbbing with life. In September 2012, there was finally reinsertion of a new small community of Benedictine monks.(source - edited)

When you visit these sleepy spots today, they are quiet and often deserted. Perhaps they’ve always been that way. The ascetic hermits of the past found something peaceful and spiritually renewing in the eremos of the mountains.