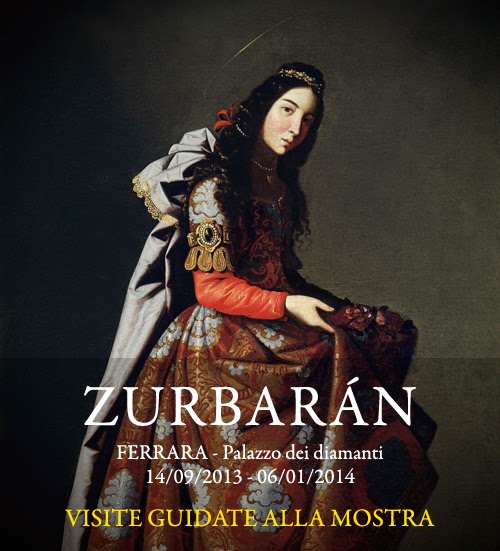 In the 17th century Spanish art had its “Golden Age”. The genius Velázquez was at court, El Greco was painting his tortured scenes, and in Sevilla - sometimes called “the Florence of Spain” - Zubarán pursued an illustrious career. Never heard of him? Rectify that immediately.

In Ferrara at the moment (until 6th January 2014) there’s an astonishing retrospective of Zubaran’s work. To this small town in flat, rural Italy comes what is surely the best collection of his work ever brought together: they come from the Prado in Madrid, from museums and galleries in Bilbao, Sevilla, London, the USA (and one from Italy); from private collections (one never before shown); and one specially restored for this exhibition.

There’s the ‘hanging hermit’ - San Serapio (1628) - painted for Zubaran’s patrons at the Monastery of the Merced Calzada. There are portrait and story cycles. There’s his spooky San Francesco, hooded and holding a skull -- the Council of Trent directed that artists should paint the saint in humble and naturalistic ways. There are many paintings of visions, ecstasies and the Immaculate Conception (following all the rules of correct iconography). Two exquisite small still-lifes; magnificent larger portraits for ‘the American market’ (Spain’s New World); and his famous ‘Agnes Dei’ lamb. Bliss.

The exhibition in Ferrara is in the unusual Palazzo dei Diamanti, so-called because of it’s odd external surface, studded with three-dimensional pyramidal stones.

As for a description of Zubarán's work and the exhibition -- I quote from the Exhibition brochure:

Palazzo dei Diamanti presents the first solo exhibition in Italy dedicated to Francisco de Zubaran (1598 - 1664), one of the great seventeenth century Spanish artists. Organized by the Fondazione Ferrara Arte and the Centre for Fine Arts in Brussels, this exhibition will reveal the mastery of a painter long known as the ‘Spanish Caravaggio’ through masterpieces that span his entire artistic career. An impressive selection of works illustrates his talent, beginning with his debut on the Sevillian art scene through to the pictures made for the Court in Madrid and the New World, up to his last paintings when his style underwent a shift towards the classical.

Along with Velázquez and Murillo, Zubarán was one of the protagonists of the Golden Age of Spanish painting, which with its refined naturalism left a lasting legacy on European art. What makes his style unique is his ability to translate the ideals of the baroque era by describing everyday objects using impressive techniques that enhanced their sensory splendour while suggesting a more meditative spiritual quality.

The play of light has a fundamental role in his works and is used in infinite variations. Characteristic are the dark background from which emerges a solitary figure and the use of chiaroscuro to confer a sculptural effect, or bathing the scenes in a golden light to give a supernatural luminosity to sacred visions. His mastery in painting draperies and clothing is without parallel, from the most austere that play upon almost monochromatic tones to the white robes of his monks, or the sophisticated brocades of the robes of the saints, who, elegant and majestic, resemble more noblewomen of the court than sacred figures, The rare and fine still lifes, lastly, with their strikingly modern formal simplification, always have a religious subtext. In these small sized pictures, in which objects are placed in a rarified and silent space, Zubarán presents the forms as purified by the light, creating a crystal clear vision of detail and silent monumentality.


On of the greatest interpreters of naturalism and tenebrism, Zubarán was loved by his contemporaries, but also by generations of artists from the nineteenth and twentieth centuries like Manet, Morandi, Dalí and Picasso, who praised the splendour of his work, his balanced compositions, and most of all, the immediacy with which he represented the spirit of his time.

Images of Zubarán’s works: from various sources around the web.

Posted by Annette Freeman at 8:02 AM