I’ve toured a lot of cathedrals and churches in Europe, in various states of repair and sometimes disrepair. But in a personal first, I recently toured a cathedral that is under restoration. In order to raise a bit of money, and to keep a connection with the community, the restorers of Santa María della Vitoria give guided tours, hard-hats included, of the re-construction site. It’s a novel experience, not only to see the restorers at work, but also because you’re taken up into the innards of the church, climbing narrow spiral stone stairs behind the walls, and walking along the semi-hidden balconies high above the nave.

The church was originally built in the late 13th and through the 14th century. It was incorporated into the medieval walls protecting the small city of Vitoria - or Vitoria-Gasteiz, to give the town its full name. It’s located in the Basque Country, in a district called Àlava, and in fact is the regional capital of the Basque Autonomous region and site of the Basque Parliament.

If you visit the website of the Cathedral you can take a pretty cool virtual tour of the church under restoration, choosing between the various levels of the building - from the basement (an old crypt which will be used as a museum) where the columns holding up the church have been sternly buttressed; the lower level of the church (the nave and transept); the ramparts walk, which takes you outdoors along the rim of the church roofline with views across the town; the Triforium, where you can look down on the nave; the ceiling level (visit the currently enshrouded pipe organ); and the bell tower.


From the high positions it’s disturbingly easy to see the collapse of the roof structure, with arches squished, bricks out of alignment, and rather severe-looking cracks in the walls. In the early stages of the reconstruction, bones and skulls of those buried in the nave floor could be seen poking out of the ground. They’ve since been removed and, presumably, re-interred somewhere.

The poor cathedral suffered from poor building and particularly poor re-building, to the point where it had to be closed to the public fro fear of collapse. Wiki gives the story:


The history of the Cathedral of Santa Maria (popularly known as Old Cathedral), is itself a synthesis of the history of Vitoria-Gasteiz. Built on the cemetery of the primitive village of Gasteiz (which today can be accessed through the excavations), the church of Santa Maria collapsed with the fire of 1202, and Alfonso VIII of Castile (who had conquered the square just 2 years earlier), ordered the city be rebuilt and raised at the site of a former church that was to serve two very different purposes: to save souls and store weapons. Thus was born the Cathedral of Santa Maria, both church, and a temple-like fortress that served as entry to the city.

The project was changing with the centuries, so that each change was made without taking into account the above, this was the case in the 15th century (when the church became collegiate), and finally in the sixties, when it was decided to reverse the works of strengthening of the external walls and widen the windows purely for aesthetic reasons. What we ended up with was forcing the temple to close for fear it will collapse during the Masses.

Today the cathedral is again open, and offers visitors a unique experience: a trip through time in layers. Since the remnants of the original village, following the current Vitoria-Gasteiz, to the Gothic redesign of the mid-20th century, passing through foundations of more than a millennium old, and plans Romanesque and Gothic, all perfectly discernible by the colour of materials used at each stage. 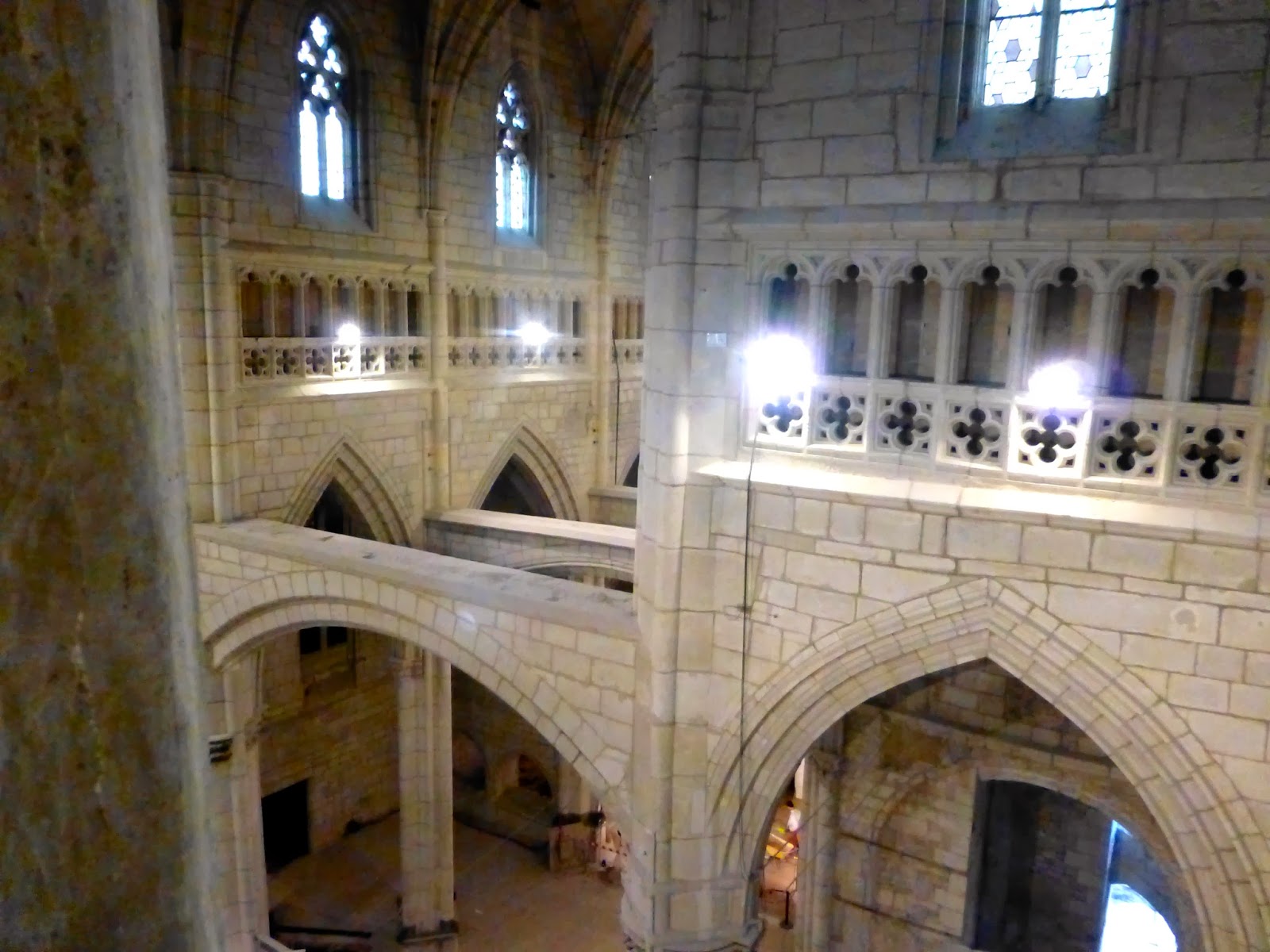 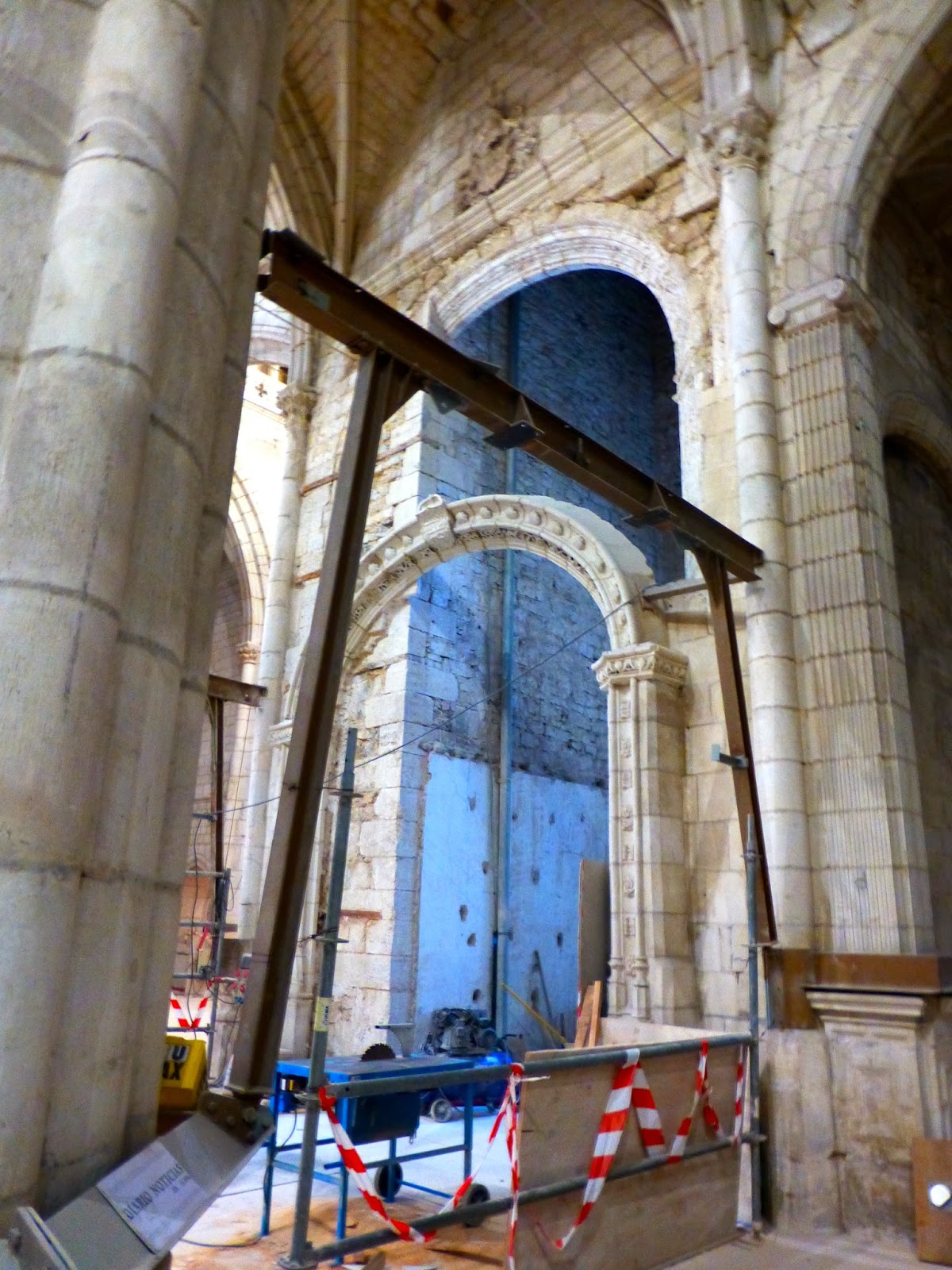 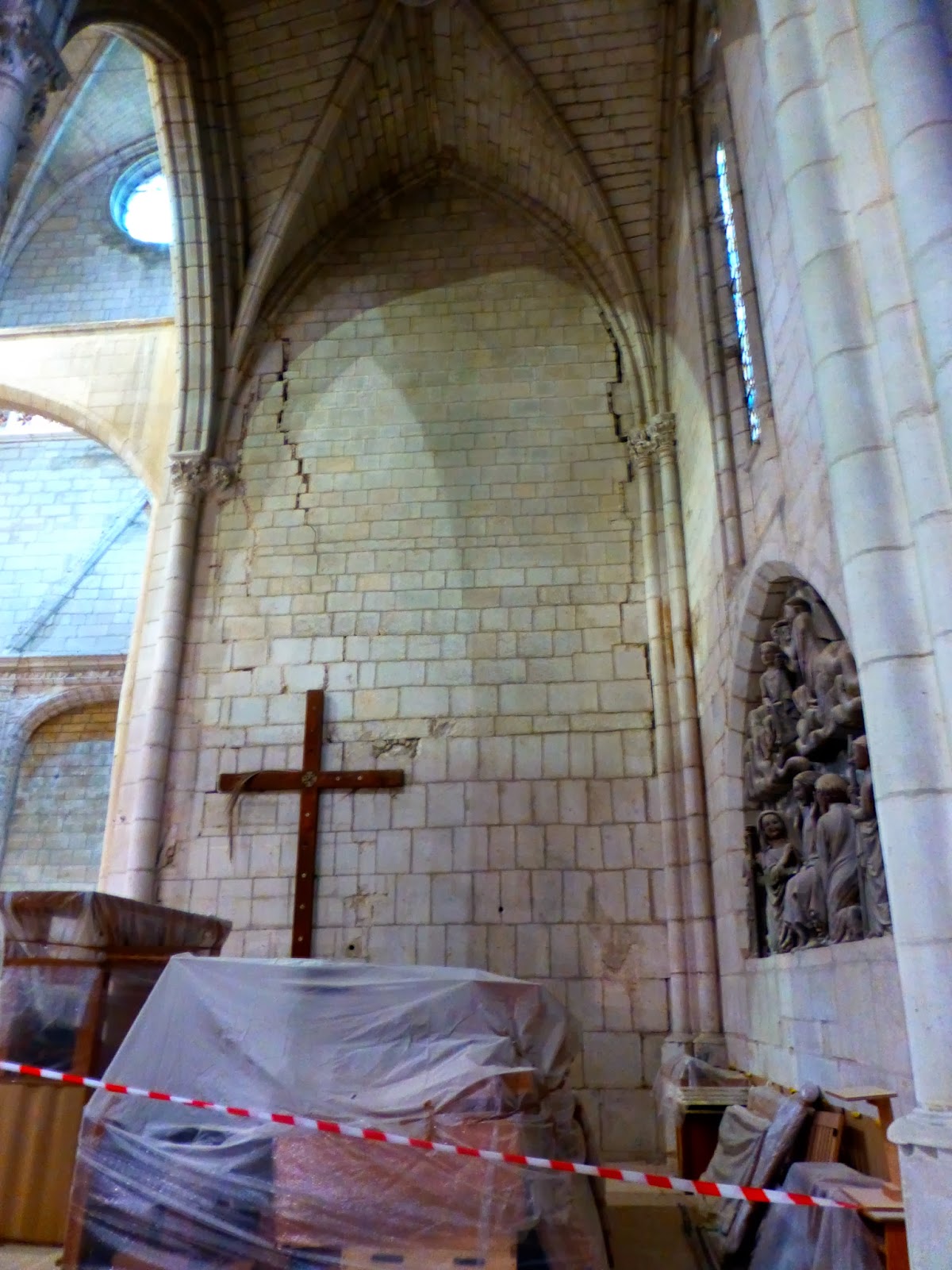 The main entrance to the cathedral is rather special. The wide portico includes a chapel which has already been fully restored. A light show is played upon the walls, illustrating how the stonework was painted in bright colours over most of the centuries of its life, with successive re-painting jobs documented in the archives. Restorers in the 1960s were rather appalled by the thick layers of paint they found, and prised most of it off, leaving the bare stone we find rather beautiful today. However, the current fashion in restoration is to at least acknowledge and investigate how the painted walls would have looked in their day.

The porticoed entrance also has a magnificently carved triple doorway, resplendent with deep relief carvings and a lovely madonna - who still wears a blue cloak.


Oh, and if you’d like to help out with the restoration costs, you can “sponsor a column”: local businesses have their names on columns for which they’ve presumably supplied funds to prop up. Novel.

And a curiosity: outside the cathedral there’s a bronze statue of a man in a suit looking pensive, a book tucked in his pocket. It’s author Ken Follett, author of “The Pillars of the Earth” who was, it seems particularly inspired by Santa María della Vitoria. He is reputed to have remarked that the cathedral was “one of the three most interesting cathedrals of the world.” (What the other two were, I don’t know). His historical novel “The Pillars of the Earth” was published in 1989 (and later made into a TV series), and is about the building of a Gothic cathedral in the middle of the 12th century. It was followed by a sequel entitled “World without End.”

Posted by Annette Freeman at 11:19 AM