If you visit even a few art galleries or churches in Europe, you will very soon come across Saint Sebastian. In fact, you may very well find yourself overwhelmed by Saint Sebastian, so ubiquitous - and gory - is his image. He's the handsome young man tied to a column, almost naked, and pierced with arrows.

You may be pleased to discover that he didn't die of those arrow wounds. Although he was left for dead on the Palantine Hill in Rome, he was rescued by Irene of Rome (who became Saint Irene for her pains). Why had he been tortured? Like so many early Christians, especially under the rule of Emperor Diocletian, he had earned the Emperor's wrath by preaching Christianity. In fact, he was a soldier - a  Praetorian Guard, no less. He came from a well-to-do family who had raised him as a Christian. When he joined the army - the Roman Emperor's troops - he proceed to evangelise anyone he could. He also performed quite a few miracles along the way, such as curing a deaf-mute woman.

So, as was the fate of many early Christian martyrs, Diocletian had him tortured. When the Emperor found out about his survival he had Sebastian clubbed to death and tossed off a cliff. His body was supposed to be inaccessible, in a pit, but divine intervention enabled the early Christians to find him, and they buried him outside the walls of Rome, in the Catacombs - today called the Catacombs of San Sebastiano. The year was 288 AD. Because Sebastian had been thought to have been killed by the arrows, and yet was not, and then later was killed by the same emperor who had ordered him shot, he is sometimes known as the saint who was martyred twice.


Today his remains have been brought up from the Catacombs to a Basilica built just above them - the Basilica of Saint Sebastian Outside the Walls, originally built in the 4th century AD. He - or bits of him - lie in a Baroque chapel decorated with a large marble sculpture of the saint - pierced, for all eternity, by cruel metal arrows. The sculpture of Saint Sebastian is by Antonio Giorgetti. The Relics Chapel directly across the nave houses one of the arrows which struck St. Sebastian, and part of the column to which he was tied during the martyrdom. Here is also kept the stone carrying the alleged footprints of Jesus related to the episode of "Quo vadis?" in the apocryphal Acts of Peter.

And he was such a handsome boy. He's the patron saint of soldiers and athletes, and can be relied upon to help stop the plague. 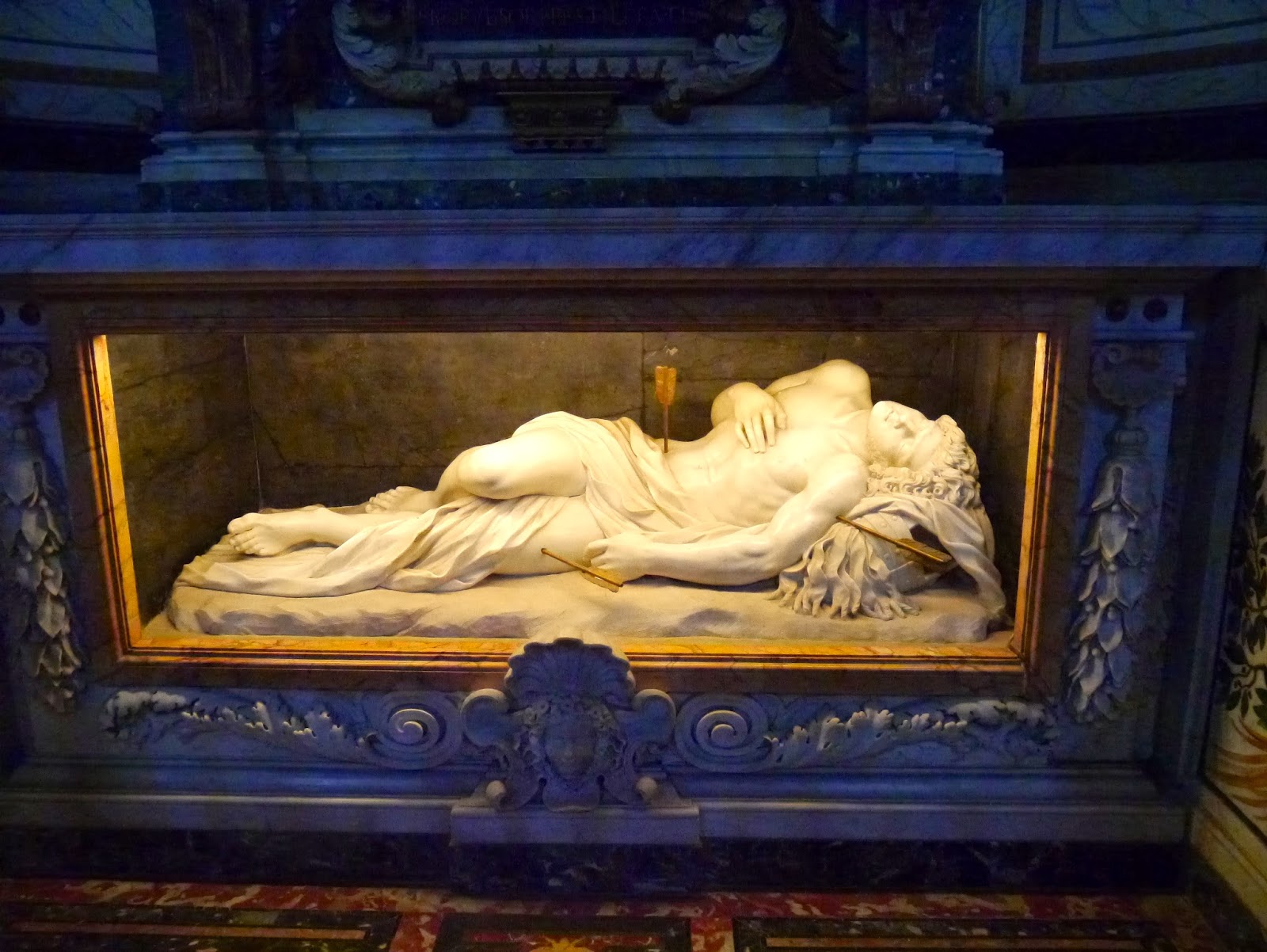 Posted by Annette Freeman at 5:46 AM