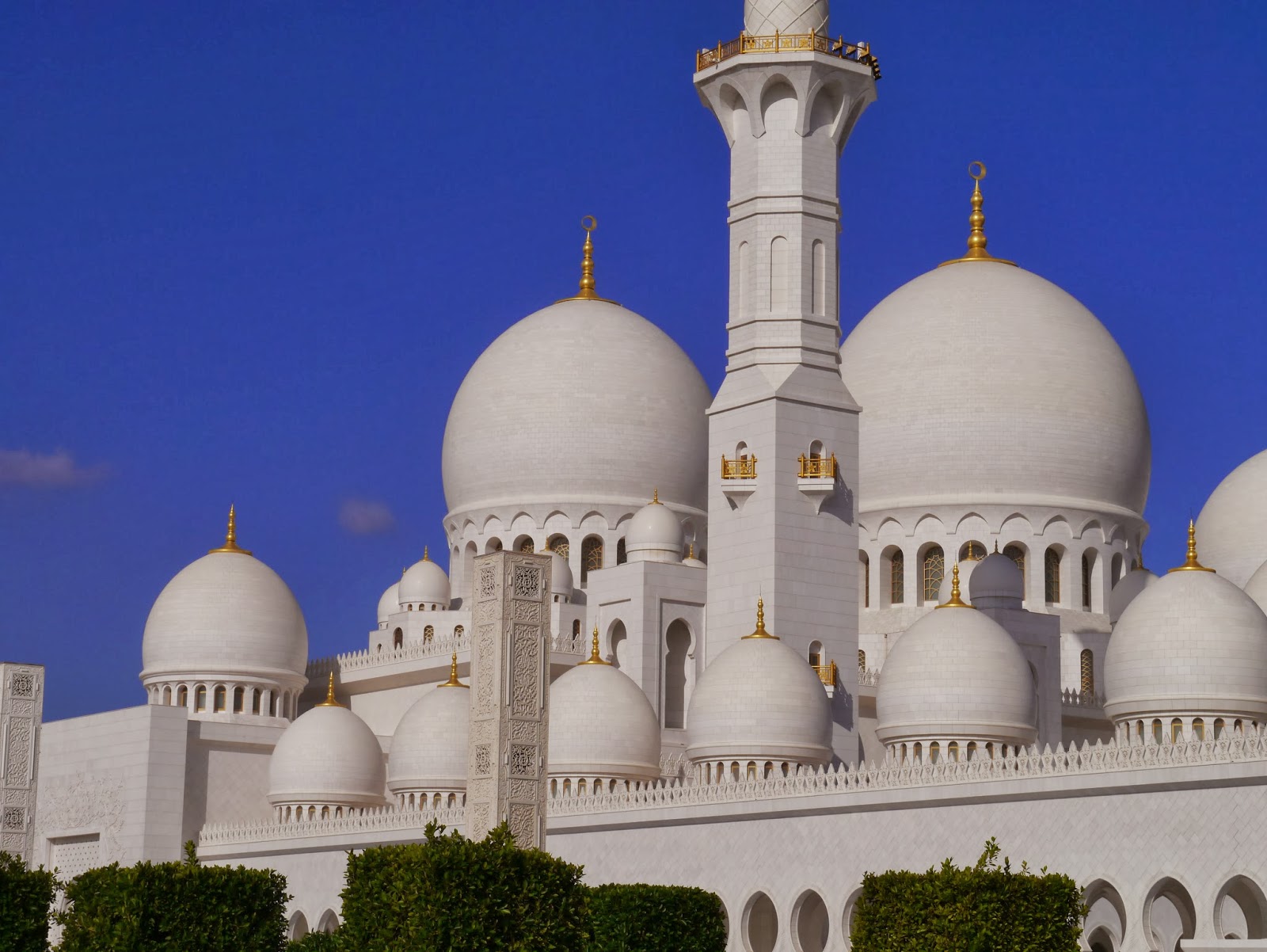 In Abu Dhabi there's one major tourist attraction - and local attraction, too. The Sheikh Zayed Grand Mosque. My guide (an Indian) just knew I'd be impressed - "40,000 worshippers! Third-largest in the world! Biggest carpet in the world!" I thought I remembered being given similar statistics when I visited the Sultan Qaboos Grand Mosque in Muscat, Oman. But modern mosque stats are like that - big, bigger, biggest. It turned out that, wherever it falls in the rankings, the Sheikh Zayed Grand Mosque of Abu Dhabi is a very beautiful thing. 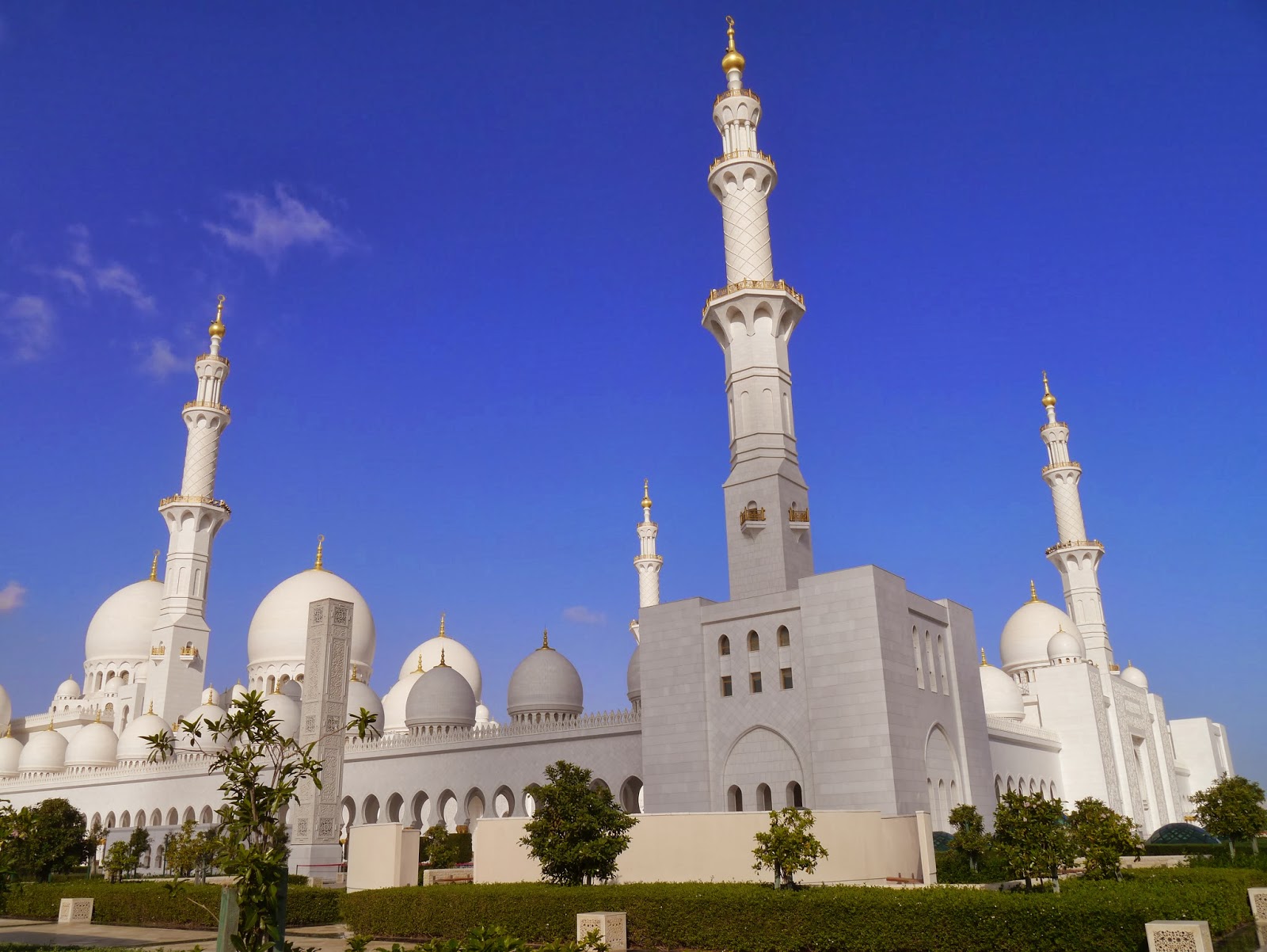 The building of the mosque was initiated by the late President of the United Arab Emirates (UAE), HH Sheikh Zayed bin Sultan Al Nahyan. His final resting place is located in the grounds of the mosque. It was constructed between 1996 and 2007, and Wiki claims that it's the largest mosque in the United Arab Emirates and the eighth largest in the world.

I looked up the design and building details. To me, there seemed a very strong Persian and even Mughal influence. The entire place is draped in spectacular marble. Here's what Wiki told me:

Natural materials were chosen for much of its design and construction due to their long-lasting qualities, including marble stone, gold, semi-precious stones, crystals and ceramics. It was built by the Italian company Impregilo. 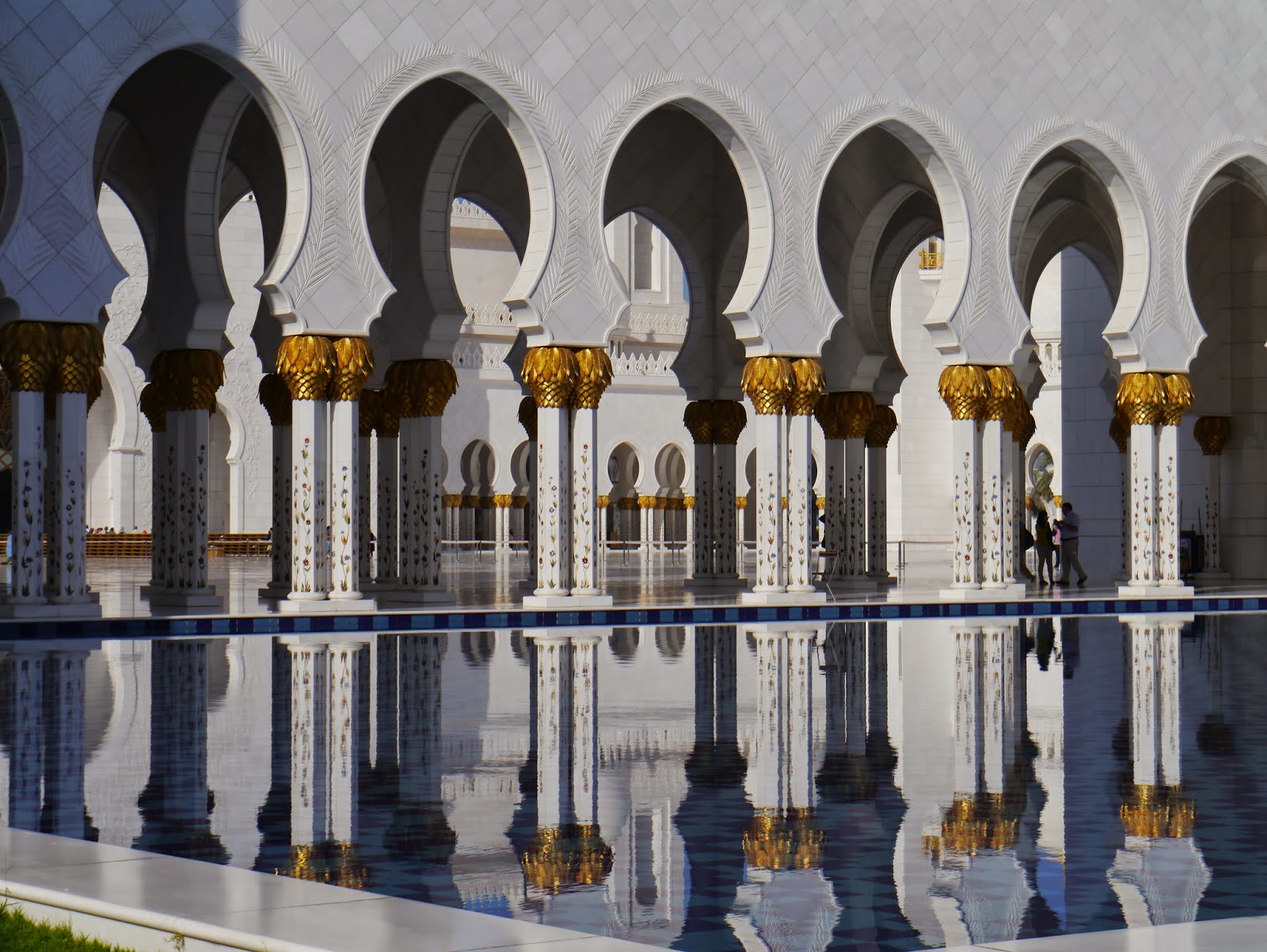 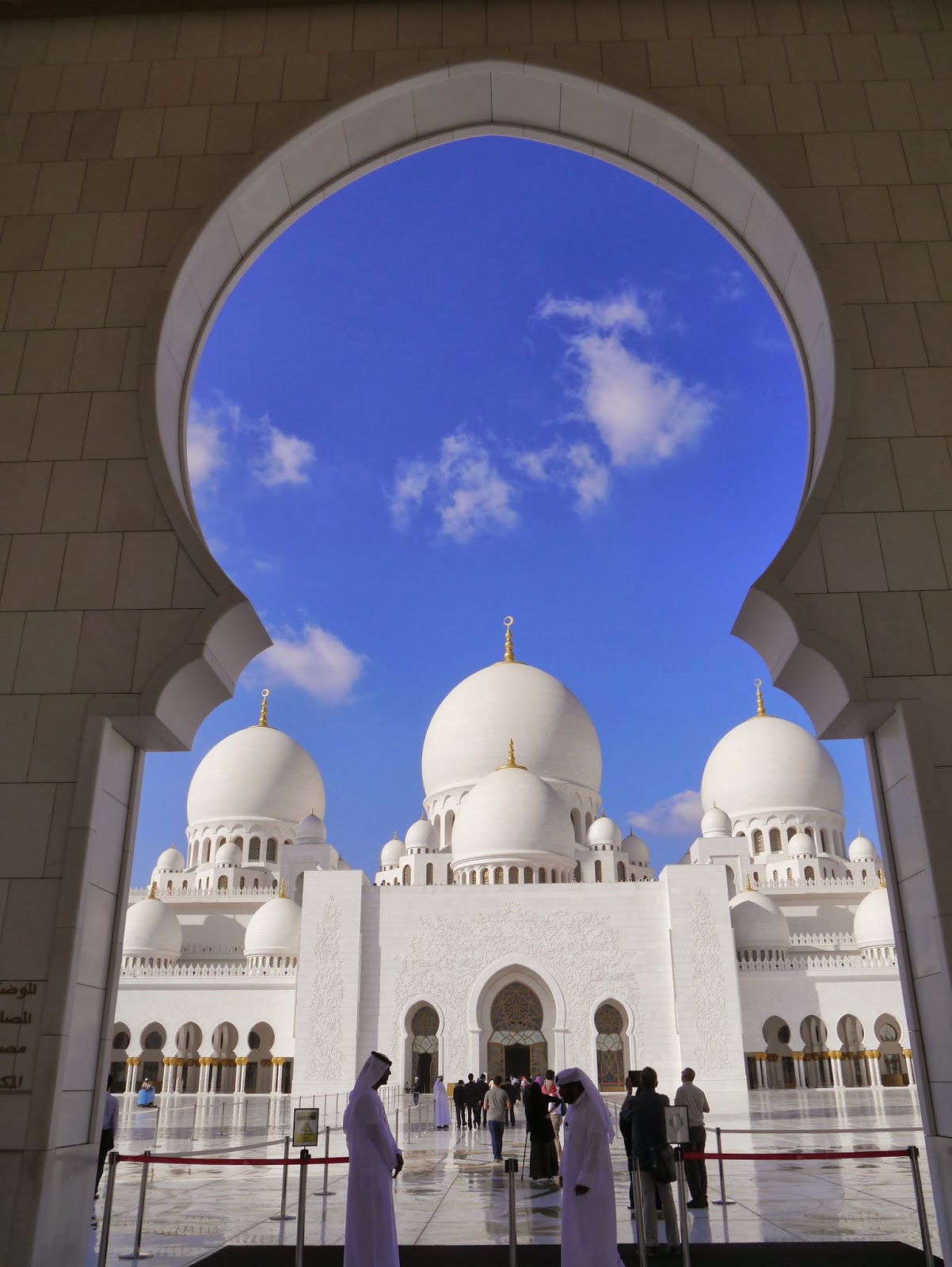 The marble used includes Sivec from Prilep, Macedonia on the external cladding. 115,119 m2 (1,239,130 sq ft) of cladding has been used on the mosque, including the minarets. Lasa from Laas, South Tyrol, Italy was used in the internal elevations. Makrana from Makrana, India was used in the annexes and offices; Aquabiana and Biano from Italy in the East White and Ming Green from China.
Wow. 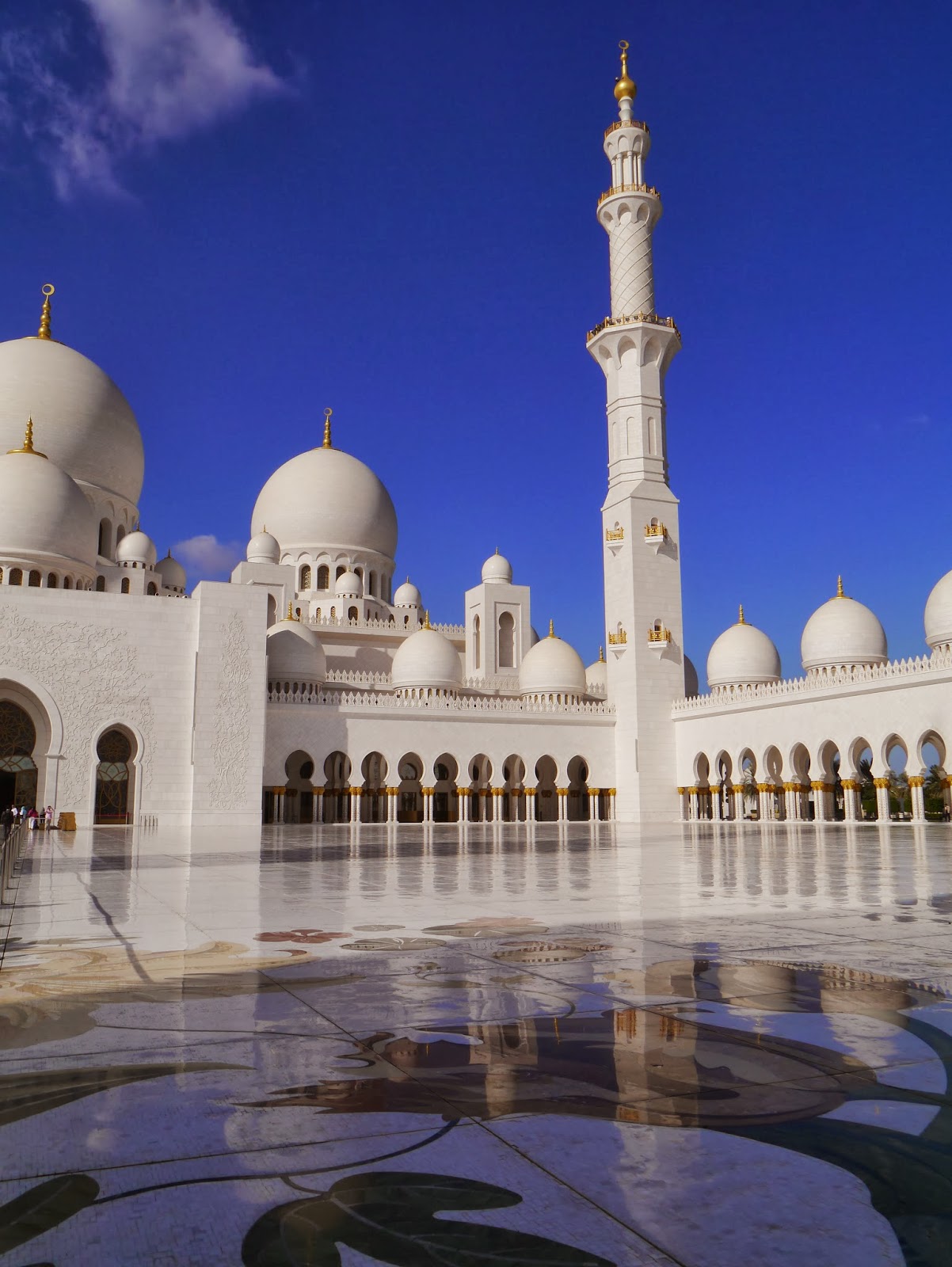 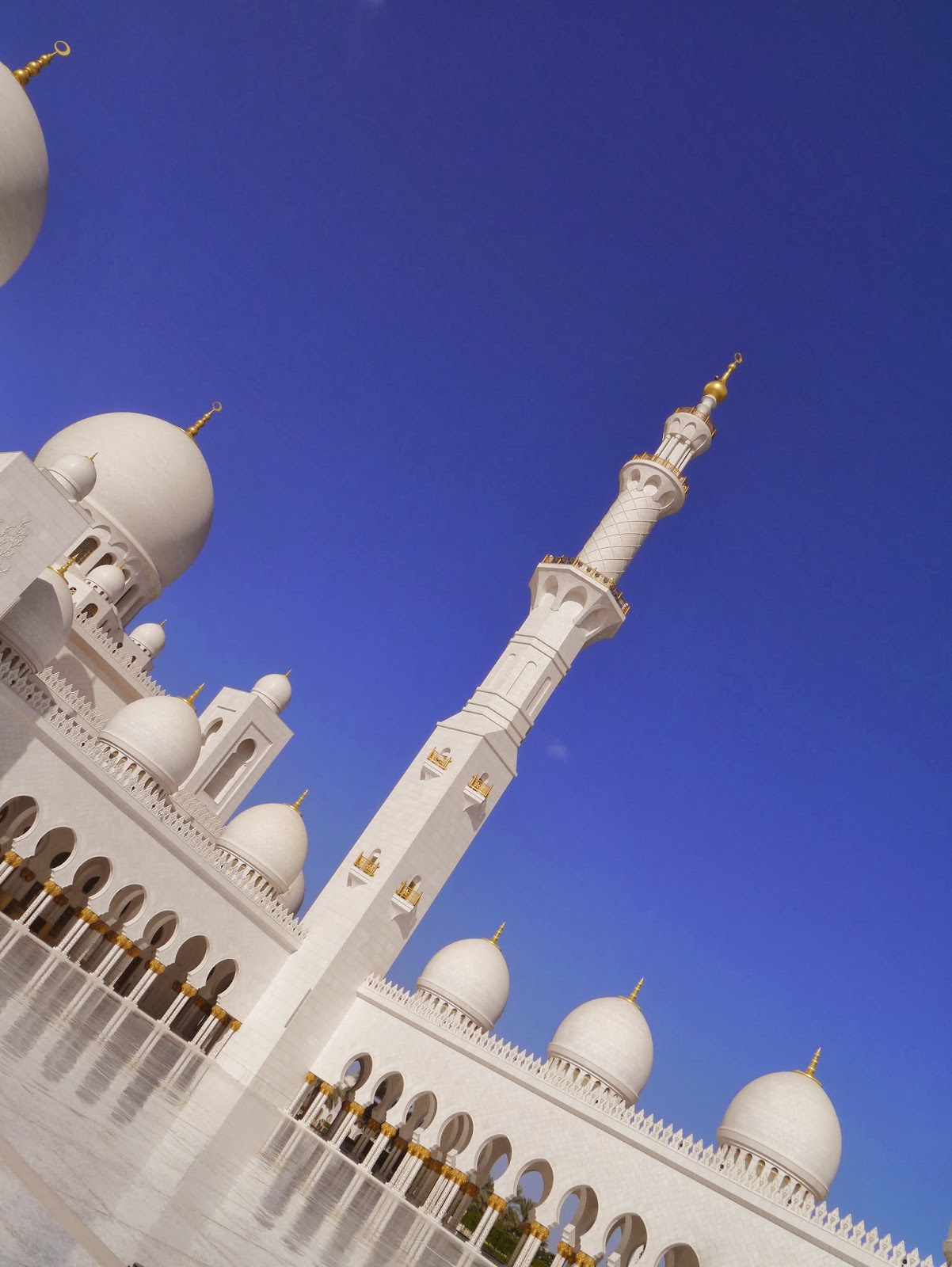 The stats (all from Wiki): The mosque is large enough to accommodate over 40,000 worshipers. The main prayer hall can accommodate over 7,000 worshipers. There are two smaller prayer halls, with a 1,500-capacity each, one of which is the female prayer hall. There are four minarets on the four corners of the courtyard which rise about 107 m (351 ft) in height. The courtyard, with its floral design, measures about 17,000 m2(180,000 sq ft),and is considered to be the largest example of marble mosaic in the world. 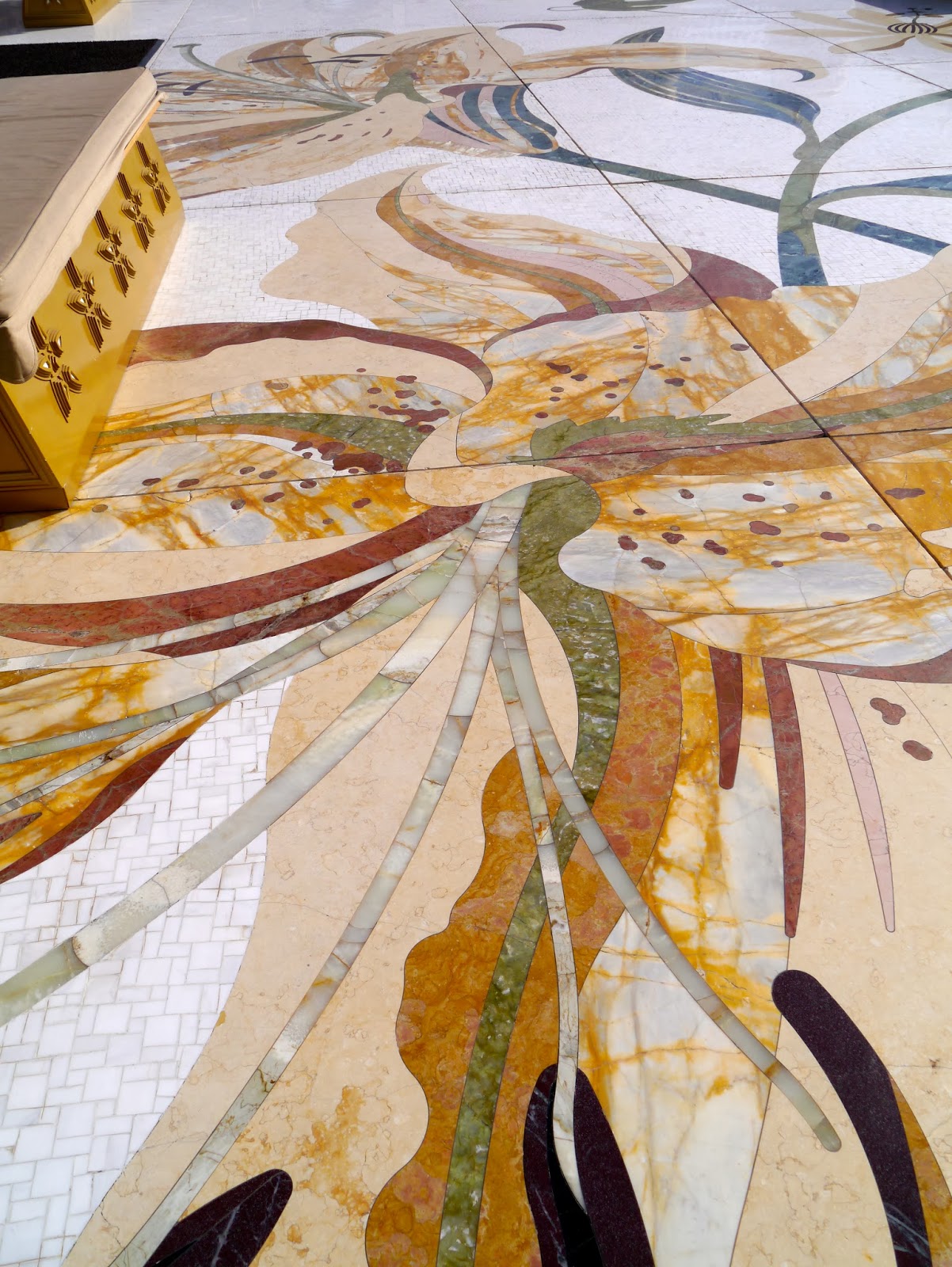 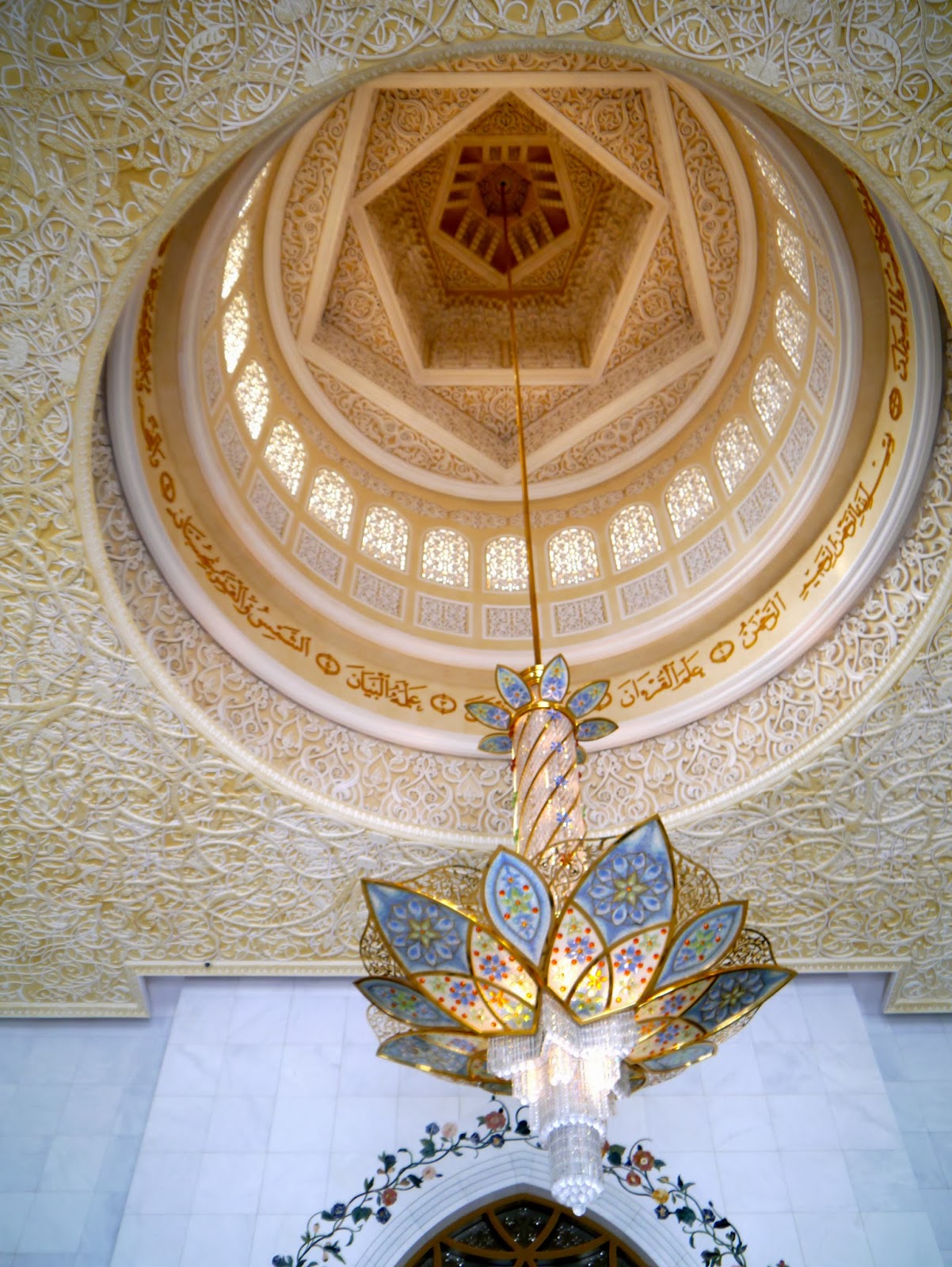 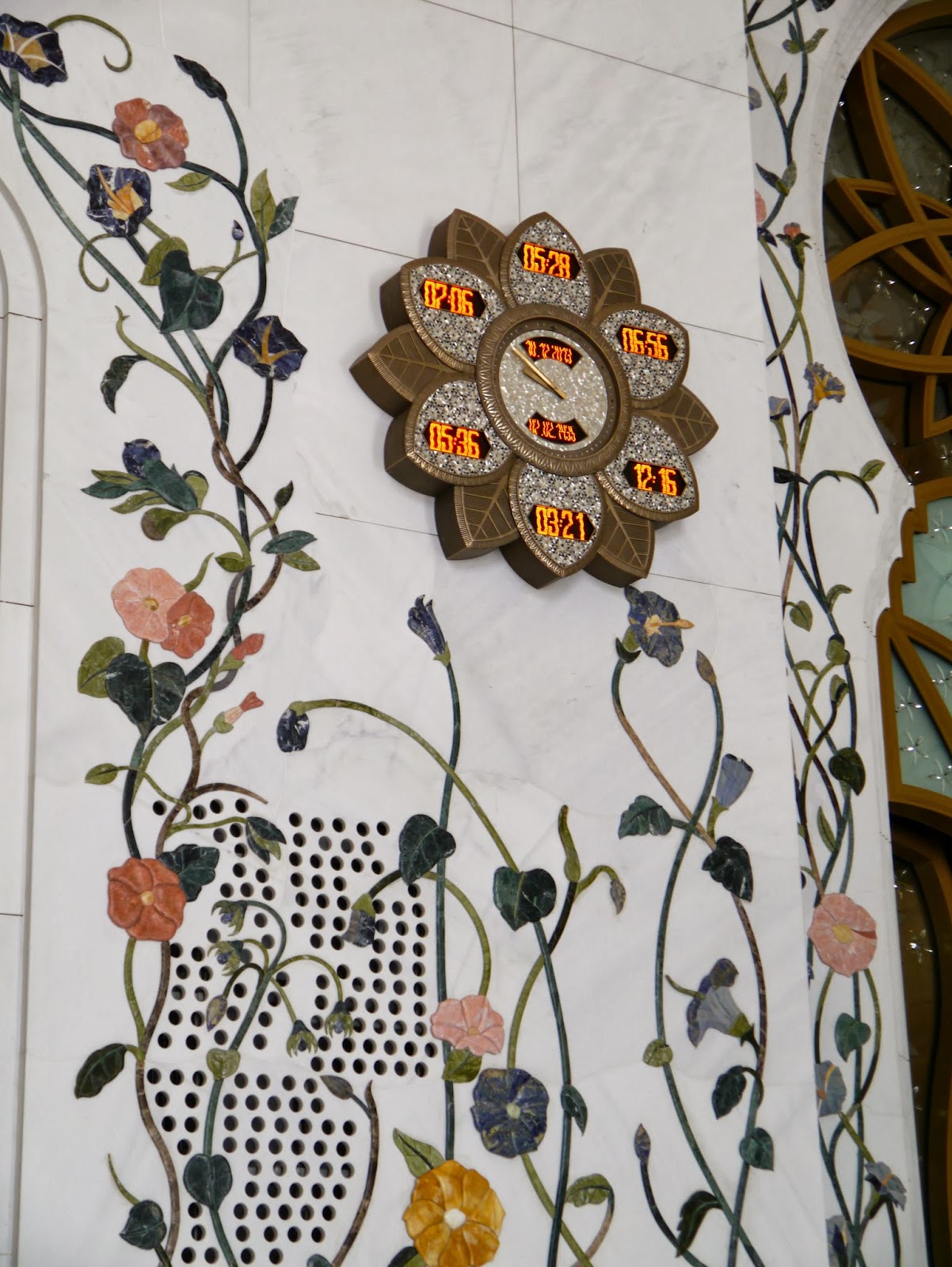 The 96 columns in the main prayer hall are clad with marble and inlaid with mother of pearl, one of the few places where you will see this craftsmanship. 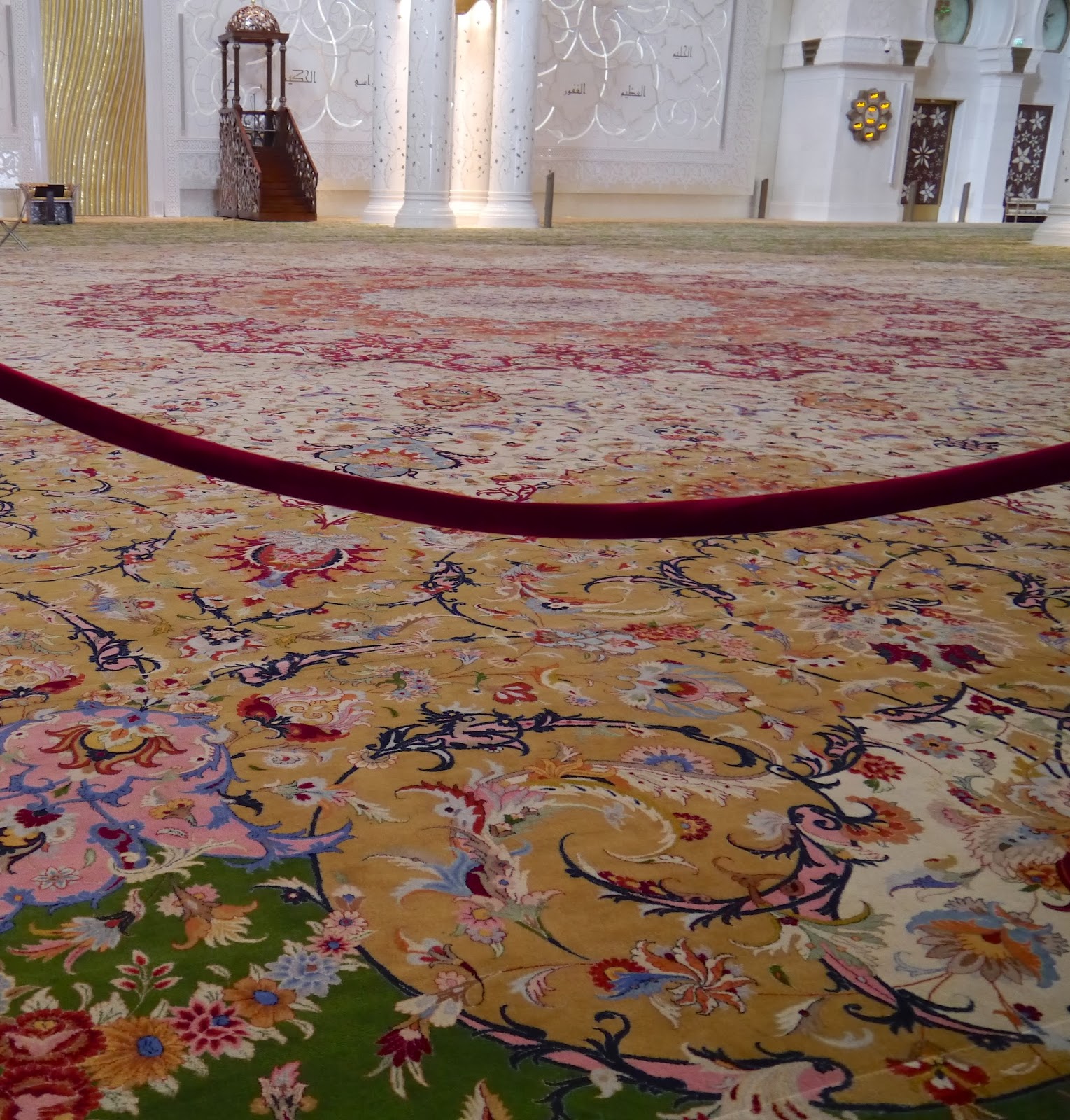 The carpet in the main prayer hall is considered to be the world's largest carpet made by Iran's Carpet Company and designed by Iranian artist Ali Khaliqi. This carpet measures 5,627 m2 (60,570 sq ft), and was made by around 1,200-1,300 carpet knotters. The weight of the carpet is 35 tons and is predominantly made from wool (originating from New Zealand and Iran). There are 2,268,000,000 knots within the carpet and it took approximately two years to complete. 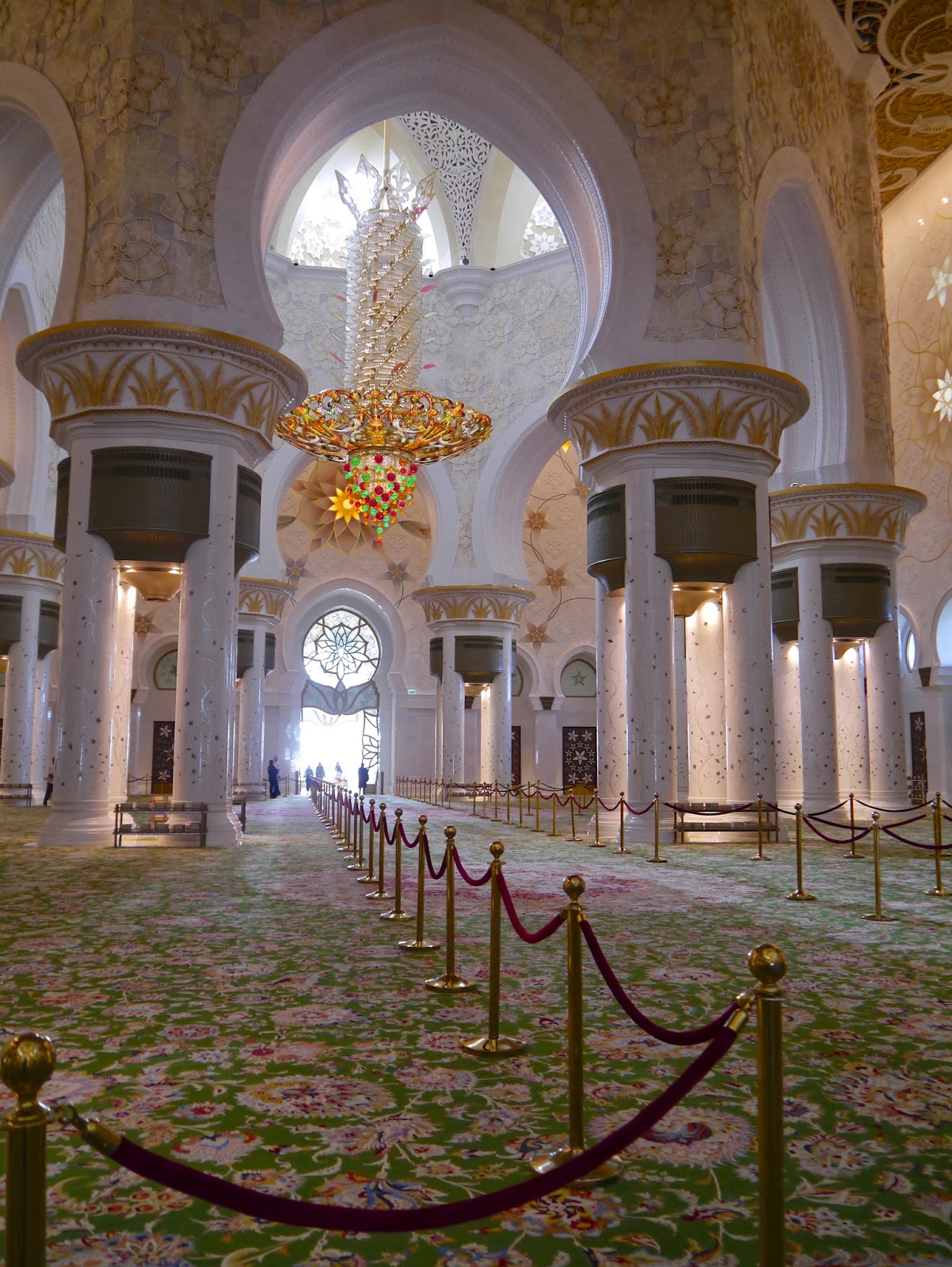 The Sheikh Zayed Grand Mosque has seven imported chandeliers from Germany that incorporate millions of Swarovski crystals. The largest chandelier is the second largest known chandelier inside a mosque, the third largest in the world and has a 10 m (33 ft) diameter and a 15 m (49 ft) height. 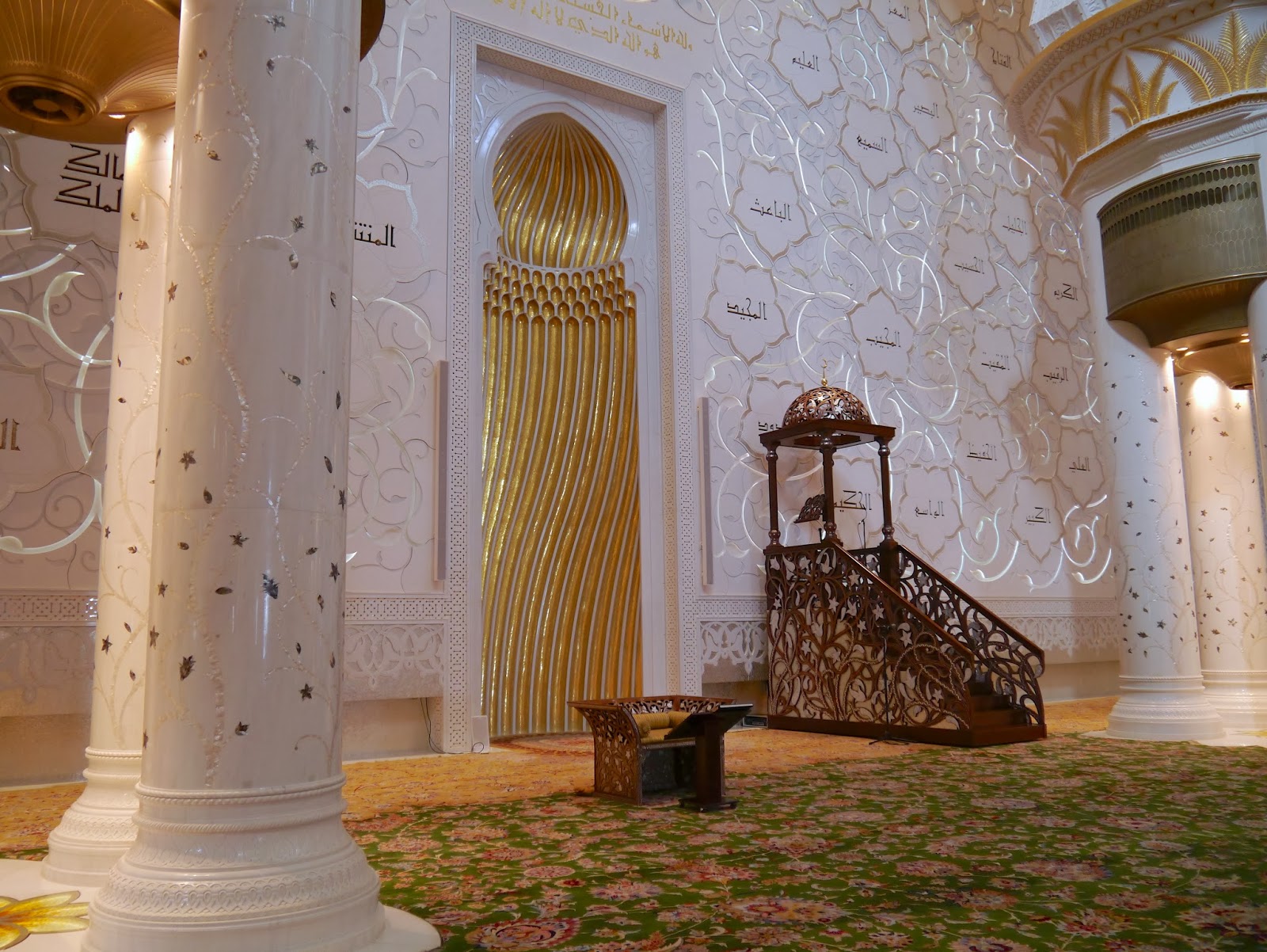 The 99 names (qualities or attributes) of God (Allah) are featured on the Qibla wall in traditional Kufic calligraphy, designed by the prominent UAE calligrapher, Mohammed Mandi Al Tamimi. 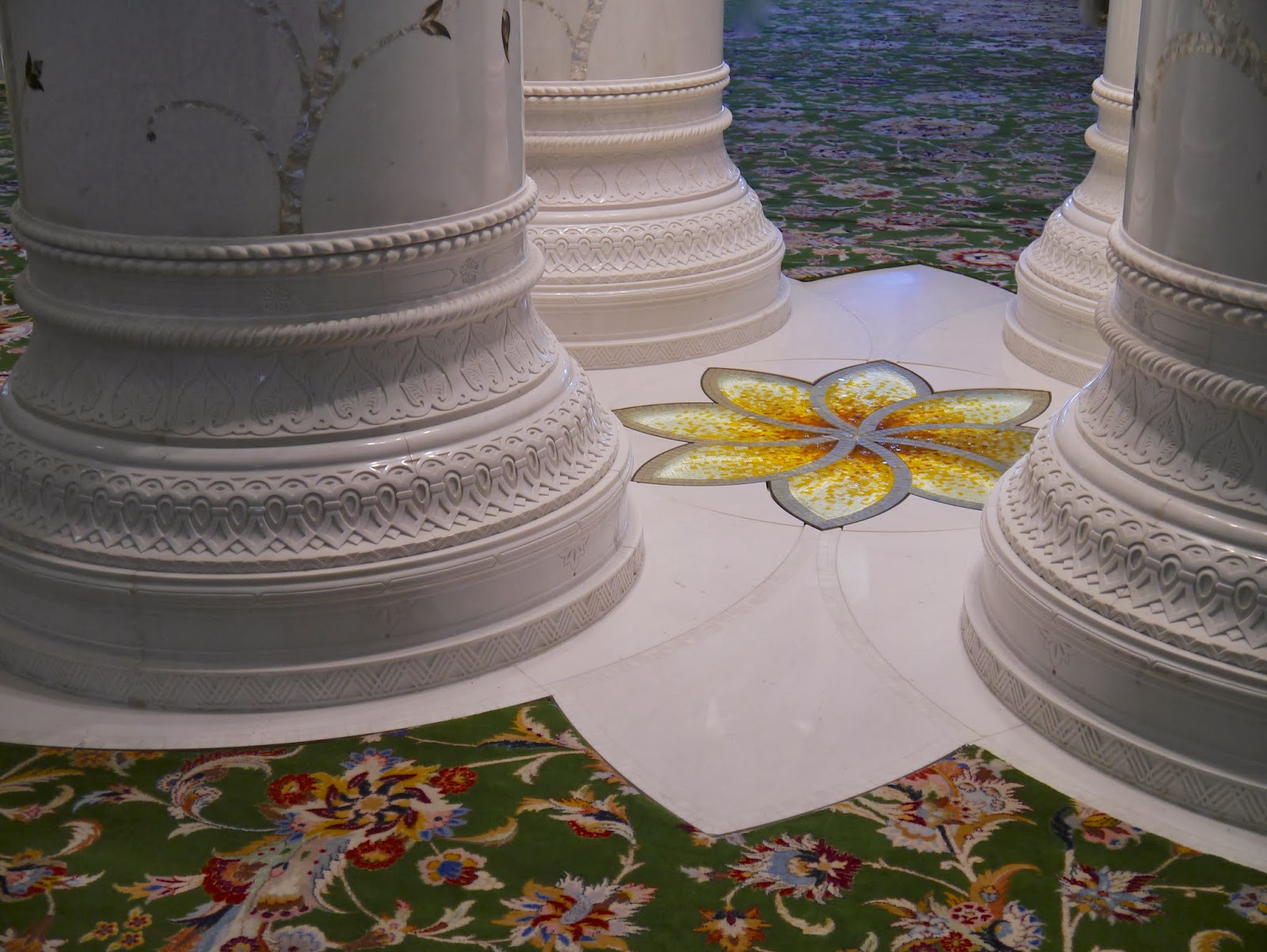 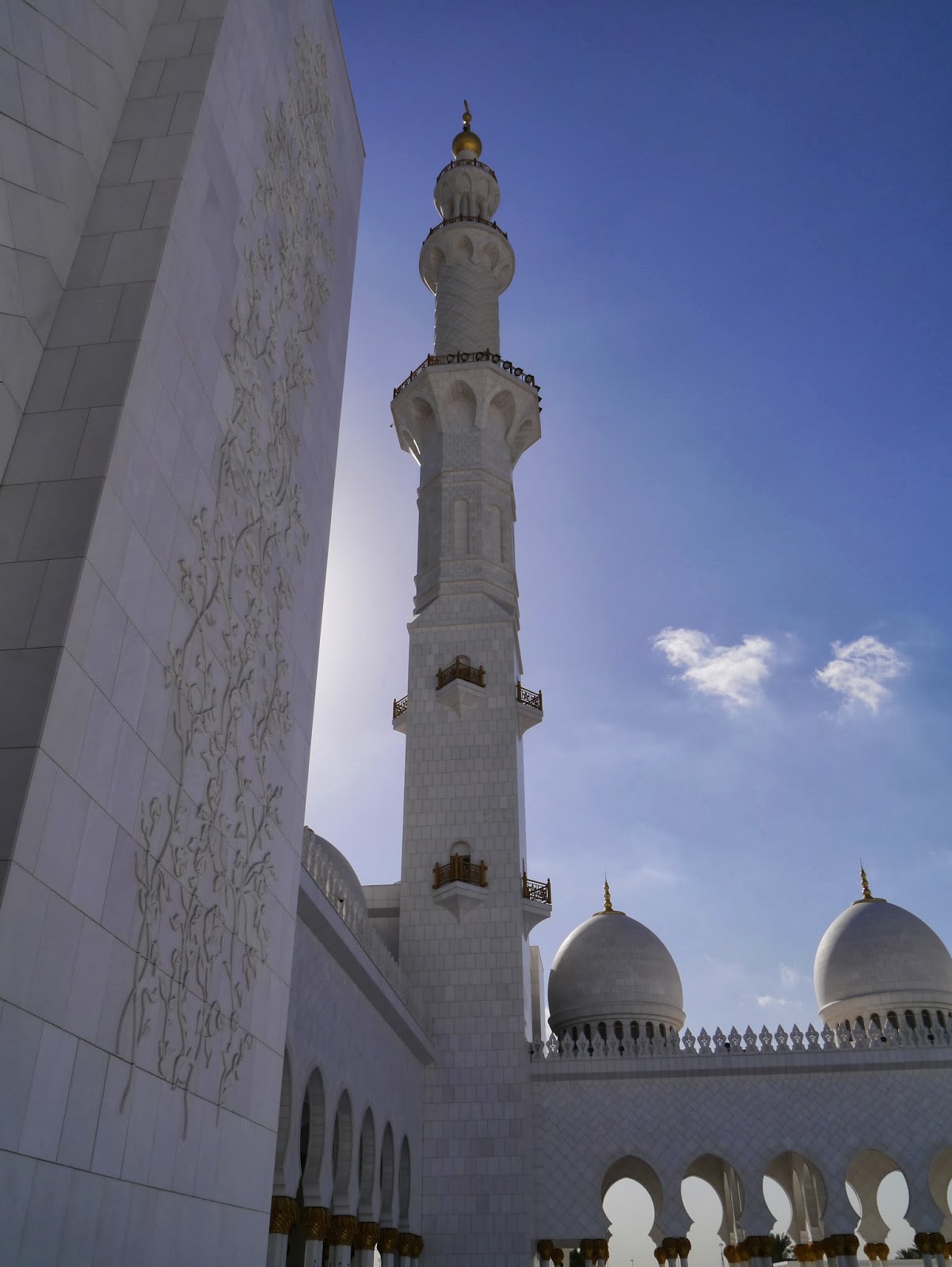 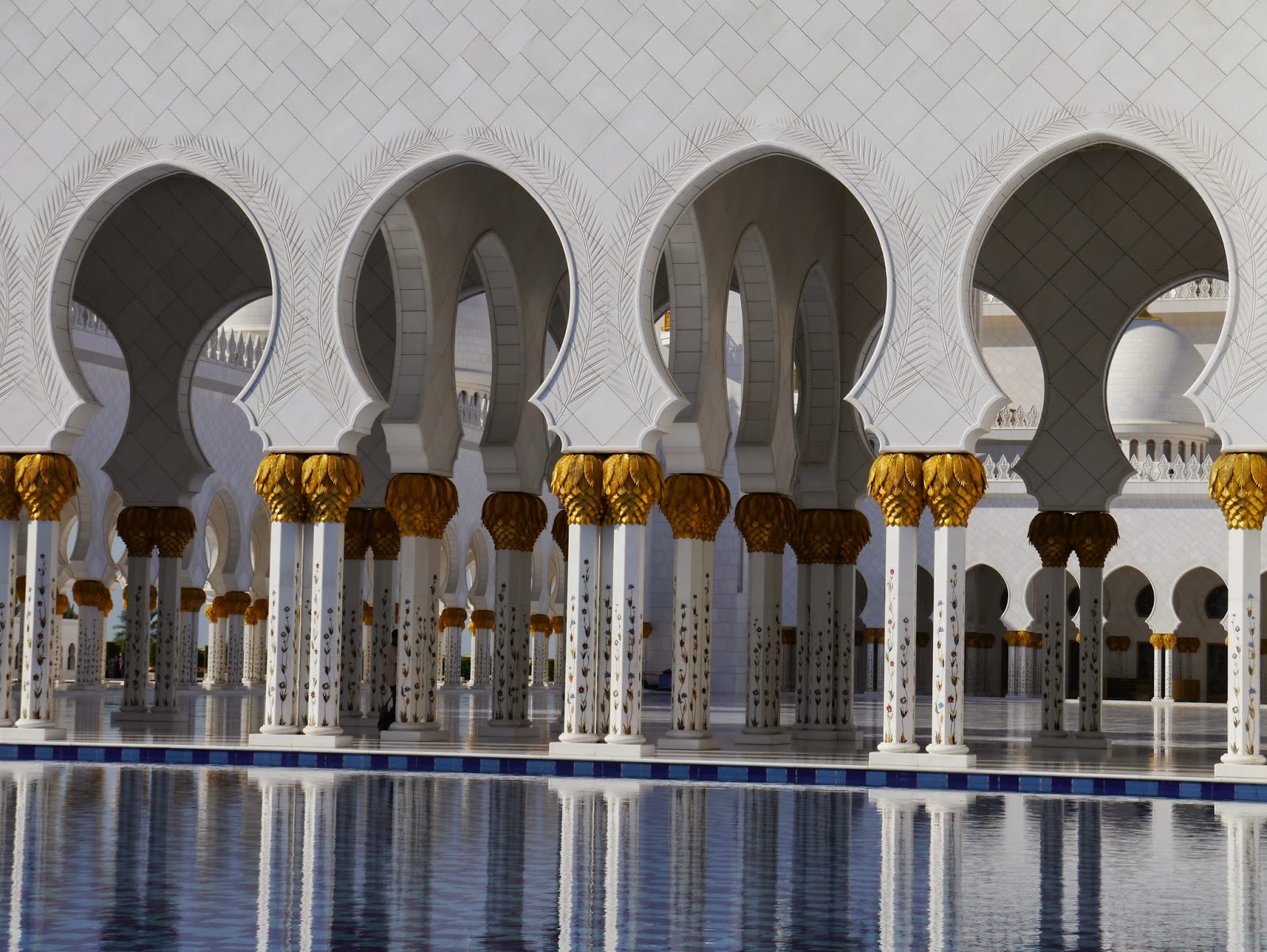 
As a testament to the vision of its founder, Sheikh Zayed Grand Mosque sits majestically at the entrance to Abu Dhabi City Island, distinctly visible from the three main bridges connecting the island to the main land, the Maqta, Mussafah and the Sheikh Zayed Bridge. The strategic geographical location of the Mosque is a symbolic expression of the emotional connection the Mosque has in the hearts of all UAE citizens particularly because the burial place of the late Sheikh Zayed bin Sultan Al Nahyan, first President of the UAE, is located beside the mosque.
The Sheikh Zayed Grand Mosque is well recognised by its pure colour, as it is clad with SIVEC marble from Macedonia.  Every artistic design element was carefully considered and fits into the overall vision of the Mosque. 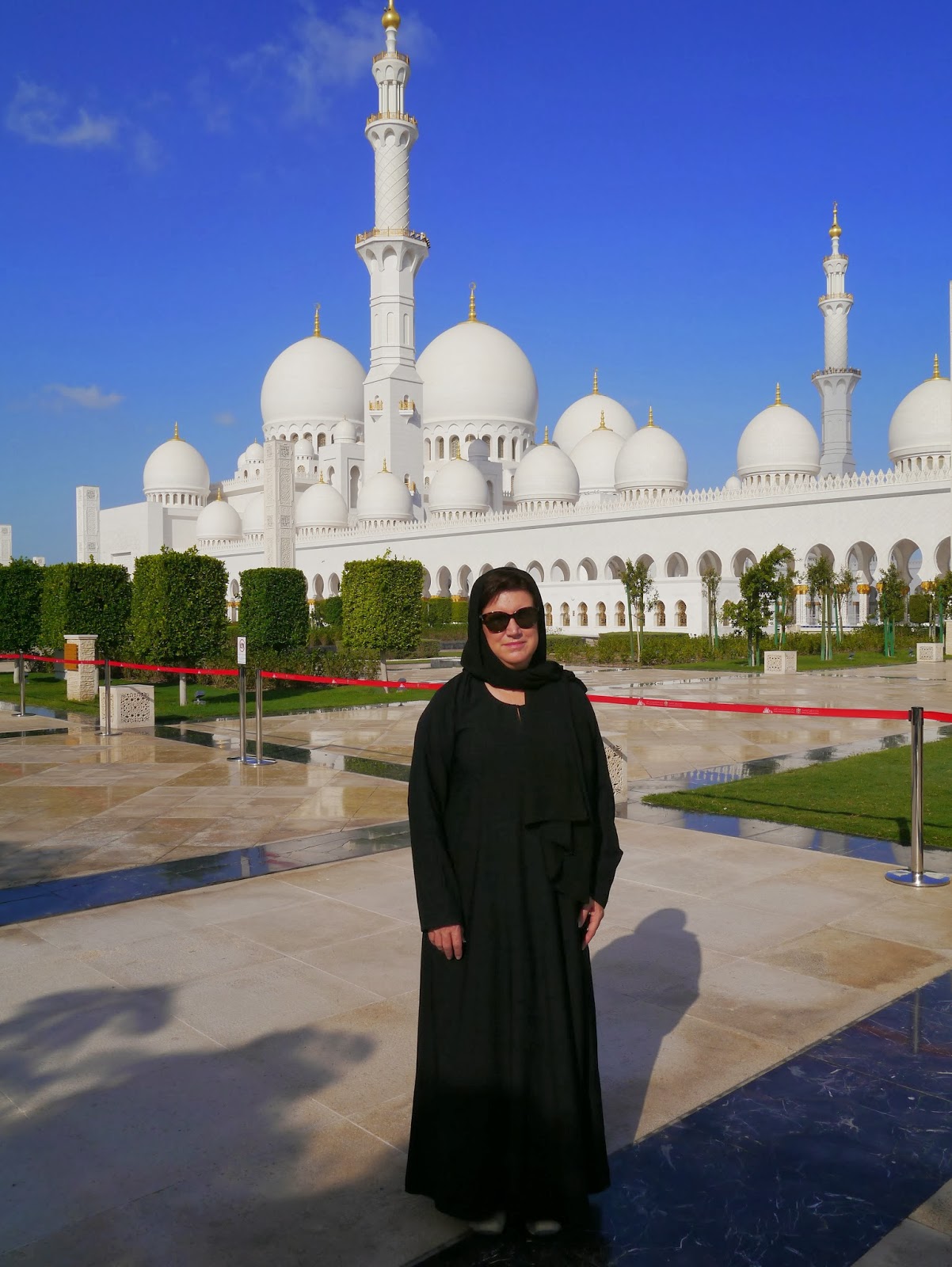 But one last thing - I expect you might be wondering how a visiting Western woman gets on in a mosque (assuming they're allowed in at all, and as you can see from my pictures, I was.) There are clothing rules: male visitors should avoid wearing shorts and singlets. Female visitors to the mosque are required to wear either a full length abaya (which can be supplied at the reception area) or a head scarf. In addition, tight and revealing clothing is not allowed. Luckily, my guide had a spare abaya for just this very circumstance, and here's me full rigged out (though not wearing it properly - oops! - that bit of neck shouldn't be showing. I spent most of the visit very hot, and constantly tugging at the headscarf to try to cover all hair and skin. I was only giving an admonitory finger-wag by a guard once.

Posted by Annette Freeman at 1:21 AM