I am still waiting to hear if the apartment at St Pan (don’t you love the appropriateness?) is mine, but I remain quietly confident. Thanks to Sue (librarian extraordinaire) for finding this link with pictures of my new address:
http://www.guardian.co.uk/artanddesign/gallery/2010/may/03/st-pancras-chambers-flats#/?picture=362137298&index=9
I like the idea of living somewhere called ‘St Pan’. You can’t have too many Pans in your life.
I am becoming a rusted-on fan of Carluccio’s http://www.carluccios.com/ Coffee there this morning; then an excellent lasagna and Chianti at the branch in my putative new home, St Pancras. At the moment Kyle and I are eating Parma ham, ciabatta and a variety of lovely cheeses courtesy of the Earlsfield branch (where I have made many new friends). Perhaps it’s something about being closer to Italy.
There was a busker in the Tube this morning...singing opera. Posters on the walls advertised flights to Venice for 130 pounds. Wow. I thought about the debate last night – it was great to see the people taking advantage of a forum to have their say. On a smaller scale, it was really what I always hoped Tea In The Library would be – and sometimes was. 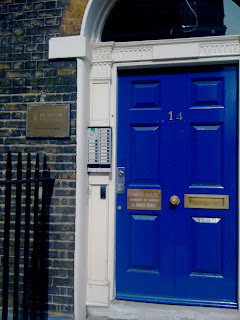 This afternoon I searched for and found the heartland of the Birkbeck Philosophy Department, behind a blue door in a Georgian row house in Gower Street, Bloomsbury. I was fascinated by various signs along the row informing passers-by that a suffragette or Victorian scientist or other long-dead luminary had lived in the houses, and I missed the unostentatious sign saying ‘Birkbeck College – School of Philosophy’ at first. But eventually I found the correct door and perused the names against a list of bells. Most were faculty, but one said ‘Department Administration’. I buzzed that buzzer, and was admitted. The first door I came to disclosed an Indian lady flinging files and boxes of papers about and looking quite harassed. I introduced myself, and said “Are you Simmi?” Yes, she was. I had corresponded with Simmi in the original application process – she’s the administrator for the department. She said, “You sent me an email this morning” (true) “I haven’t read it yet!” She told me that yesterday was the final submission day for the theses of the 2009/2010 students, and – in Simmi’s immortal words, spoken with a desperate flourish of her arms at the over-full office surrounding her - “I am drowning in a sea of philosophy!”
I assured her that my enquiries were minor in comparison to her obvious stresses and strains, and we chatted. I did find out that the first class in ‘Introduction to Philosophy’ will be at 6 pm on Monday 4th October – “It’s always on Monday”, per Simmi. She also told me that there would be a Philosophy Department ‘induction’ on Thursday 30th September, but she also said that this was not compulsory: “There will be a welcome talk, and then everyone gets very drunk. It’s a nice way to meet people.” As to when I would be asked to choose my optional subjects, this would occur “when I ask you”, said Simmi. As she explained it, the academics had not yet given her their course outlines, King’s College (with whom Birkbeck Philosophy students share lectures) had enrolled too many people, and there are timetable clashes to work out. “You might tell me you want to do Greeks, and there may be no Greeks!”
I left Simmi to her troubles and her sea of philosophy, armed with a little more information, and made my way to a plain hotel in Bedford Way, a block or two from the main College buildings, where Birkbeck was holding an Open Evening. Although I am already enrolled, I thought there might be some items of interest in this event, and I was right. There was an extraordinary mix of people there: old, young, in the middle, short and tall, many nationalities, abled and disabled, long and short, fat and thin, brown and white, veiled and unveiled...a true polyglot. Kind of like London as a whole, I guess. In the welcome speech we were told that the average age of students at Birkbeck is 34, with the range from 21 to 90. The College teaches 19,000 students annually (including short courses, I assume). We had a little history: founded by George Birkbeck, described as a ‘Yorkshire philanthropist’ as ‘The London Mechanics Institute’ in 1823. It became part of the University of London in 1920, and it confers degrees of that University. It is known as London’s ‘evening university’ and specialises in part-time courses for people who work. This helps to explain the varied clientele.
Then came rather a highlight: the Birkbeck librarian. Now, I know I have at least a couple of librarian readers, so I will tell you about the Birkbeck library, which I toured this evening. It has been a long time since I was in an academic library. I made a point of locating the philosophy books: Birkbeck uses the Dewey system, so they are first: the 100s. As is only proper :-) I saw half a dozen well-used volumes of the book I bought yesterday, ‘Philosophy – A Guide to the subject’, A C Grayling, ed.
The library contains about ‘a third of a million’ books (as it was put), plus electronic resources, and access to other libraries, including the University of London library of two million books, and the British library, through something called ‘SCONUL’.  Birkbeck has subscriptions to 20,000 journals in full text, and 18,000 eBooks. I don’t know if this is a lot by university library standards, but it sounds like more than enough to be going on with. They have designated subject librarians, and are open from 8 am to midnight seven days a week. Their catalogue is online and the electronic resources can be accessed from anywhere (by students, of course): http://www.bbk.ac.uk/lib/
I hope that’s enough information to satisfy the professionals. For me, I just felt quite excited and ready to get on with it.
Posted by Annette Freeman at 11:33 PM