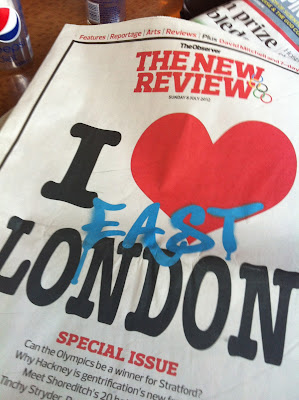 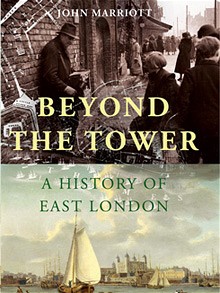 Historian John Marriott has written a weighty history of East London entitled 'Beyond the Tower'. In it he begins with the first outcast types who lived beyond the edges of The City, and later who peopled the docks that grew up in East London, many of them immigrants from the countryside and from abroad: Protestant radicals, Huguenot weavers, Jewish refugees...It’s a fascinating story of unrestrained Elizabethan property developers, plague, poverty, shipbuilding, slavery, cockneys, Jack the Ripper and finally...the Olympics.

Trying to define the boundaries of East London can lead to all sorts of arguments, but ‘beyond the Tower’ is perhaps as good a broad generalisation as any. Marriott decides to define East London as the area covered today by the boroughs of Tower Hamlets and Newham (which omits Hackney, Barking and Dagenham, often considered ‘East London’). 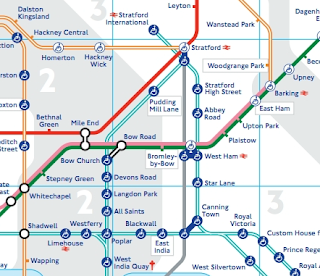 East London is very much in the news at the moment, since in a couple of weeks it will host the 2012 Olympic Games. The London 2012 Olympic stadia are built on reclaimed industrial land in Stratford, beside a huge new Westfields shopping mall. Stratford, certainly, will never be the same again. The Olympic redevelopment follows on the Docklands reconstruction that began in the 1980s, turning the old dock areas of East London into shiny new 21st century office towers.

Recently, with the Olympics almost upon us, the Guardian devoted most of one of its weekend magazines to the East End. Here's one of the most interesting articles, by Rowan Moore.

Here is Moore’s take on the boundaries of the area:

The rise of natty coffee shops in places like Redchurch Street is a fragment of huge changes over the past three decades in the East End, a large area with vaguely defined boundaries, but a powerful personality and image. Under most definitions it runs roughly from the eastern boundaries of the City of London, Shoreditch and Aldgate, to Stratford, and from the north edge of the Thames to the southern parts of Hackney.

Its core, where most of its vivid stories have been generated, includes Whitechapel, Bethnal Green and Bow. It is among the most mythologised urban zones on earth, starting with the Victorian mire stalked by Jack the Ripper, whose residents (according to Sinclair) included "verminous paupers and gibbering foreigners" as well as "comfortable artisans". Its 20th-century version came to be one of sturdy communities, stoic in the Blitz, patronised by the then Queen, a place of diamond geezers whose close-knit structures took perverted but fascinating form in the activities of the Kray twins.

Apart from reading about it, I’ve managed only a few tentative forays into the real East End of London. Of course, with the shiny new transport links that have come with the Docklands and Olympics developments, one takes the DLR (Docklands Light Rail) to London City Airport, or home from a visit to Greenwich. If you have occasion to visit an office these days, the likelihood is that it will be in a tower at Canary Wharf or East India Quay.

Spitalfield Markets sits on the very edge of the City of London, but a world away. ‘Spitalfields’ is a contraction of ‘hospital fields’, an early name for the area which was then comprised of the fields adjacent to a hospital, St. Mary’s. Even earlier, the area was a Roman burial ground. The financial buildings of the City of London these days encroach right into Spitalfields, which is not far from Liverpool Street (a ten minute walk). But there have been efforts to preserve some of the old buildings of the area, including Spitalfields Markets. These days, a visit to this old market site will uncover funky jewellery, interesting new designers just starting out, and possibly the largest collection of vinyl records (and a few record players to play them on) anywhere in London. There is also an assortment of pubs, cafes and individual designer shops, as well as a fromagerie...what more could the 21st century trend-setter ask of a gentrified East End?

Stratford lies further East - much further East, literally at the end of the (Tube) line in fact. As the hub for the 2012 Olympics, all roads presently lead to Stratford. In a canny bit of timing, Westfield (that Aussie-owned developer company) managed to complete a massive new mall across the road from the Olympic Park well in time for the Games. I have visited the mall, and peeked over the road at the stadia, but I could hardly claim to have visited Stratford. I could claim, however, to have rubbed shoulders with the locals, since the mall seems to be very popular with them.

Moore gives an architect’s opinion on the developments at Stratford:

The Olympics have added new levels of lumpiness – the stadium, the aquatic centre, the velodrome, the athlete's village, and the Orbit are awaiting integration into the wider fabric. So is the Westfield Stratford City shopping centre, which was accelerated but not created (as the Games's boosters like to claim) by the Olympics. It will take a long time, if ever, before its uncompromising backside settles into any kind of harmonious relationship with its surroundings.


It appears to me that East London is a whole world waiting to be explored, but I’m unlikely to ever really get a grip on it. Perhaps I’ll just have to be content with the stereotypes I have absorbed from the BBC television show that has been running since 1985, the much-loved 'East Enders'.   It has it's own You-Tube channel.

Posted by Annette Freeman at 10:08 AM