Big, beautiful and loud: The Sapphires 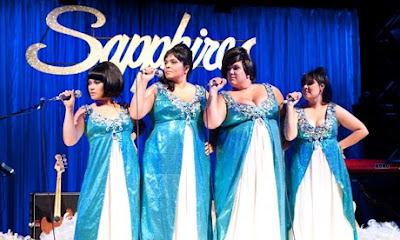 In my newly found enthusiasm for everything Barbican, I noticed promotions for a touring show from Australia: “The Sapphires”, a musical presented by Belvoir and Black Swan State Theatre Company. How could I resist a Neil Armfield production? So I bought a ticket to a weekend evening performance – only to have it cancelled because someone apparently injured themselves at the matinee. I still don’t know who, how or whether it was serious. But fortunately for them, and I, whoever it was recovered in a day or two and I was able to see the show during the next week.
The story is quite a simple one, but full of things that resonate with Australians: aboriginal singers from the country making good in the big smoke, Vietnam, and Motown songs; the 1960s; broad rural ocker accents. How much these things resonate with British audiences is moot. The night I was there the Barbican theatre was about half-full. The Guardian review
called it “a genuine, heartfelt but unconvincing compilation musical.” I thought the story was weak, the band too loud and the acting from some of the cast quite poor – but they were hamstrung by a bad script. As the Guardian reviewer put it:
the characterisations are so lacklustre and the dialogue so forgettable that in the end you start longing for the cast to jettison the script and just put on a concert. When they finally do that, towards the end, these Sapphires really sparkle.
But in my case, the Australian-ism, and especially the broad Aussie accents made me home-sick. And I don’t even admire broad Aussie accents. I was glad to see the show.
On the subject of the acting, the men in the cast were generally good; and Casey Donovan as ‘Cynthia’ acted very well. All four women sang their hearts out.
The reviewers in London were not kind. Here's  the Londonist:
The small but shapely cast attack the halting work with enthusiasm on the back of a successful Australian tour, vigorous and dilettante. But this production lacks the slickness and sparkle expected by London audiences.
The Telegraph reviewer was happier in the end, despite the ‘creaky’ story line:
The Sapphires look terrific, two of them very big girls indeed, the other pair much slighter, all dolled up in outrageously gaudy costumes, including the biggest feather boas I have ever seen. The numbers range from the Chiffons and the Supremes to Aretha Franklin’s deep-soul classics and James Brown funk, with a cracking on-stage band that comes close to matching the chops of the Stax house band, Booker T and the MGs.
The banter between the sisters is often richly comic, but when they sing they rise to magnificence, combining rich soaring harmonies with thrilling passion.
The best performance comes from Casey Donovan, built on the lines of Mama Cass, whose Franklin covers achieve extraordinary poignancy and power. But Lisa Maza, Megan Sarmardin and Ngaire Pigram all have their moments of glory, too.
Neil Armfield’s production cannot disguise the weakness of some of the writing, but it seems churlish to niggle about a show that finally overwhelmed me with tears of joy.
Before we leave this show, can I just mention the, er, elephant in the room. This Casey Donovan girl is huge. Bigger than lots of the opera singers whose size I regularly mention. And what’s more – I looked it up – she is only 23 years old. This cannot be good, health-wise. But I see from Wikipedia that she has recorded a song called ‘Big, Beautiful and Sexy’ and “has become a poster girl for larger women”. In “The Sapphires” she carried herself with amazing confidence and aplomb, as if it were not only perfectly normal but also attractive to be built like a bus. She is a very pretty girl, but I found an almost morbid fascination in watching her move around all that bulk. Can this be alright? Is it just me?

Image from: http://www.guardian.co.uk/stage/2011/mar/07/the-sapphires-review
Posted by Annette Freeman at 10:44 PM