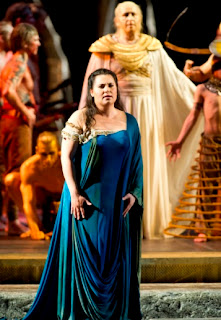 There are several first impressions to record about the Covent Garden production of Verdi’s Aida now playing. One is that it doesn’t include live animals (usually an Aida Triumphal March mainstay); another is that it does include half-naked dancing maidens and ritualised human sacrifice. Just in case you were thinking of taking the children along. Another is that of all the well-know exotic civilisations, the one where it is ostensibly set, Egypt, seems to have given the least inspiration to the design. We do indeed have masked women (Oman), King-fu fighters (China) and any number of Incan warriors. As you can imagine, this is all very sumptuous and provides a classic night of grand Opera in fine style.
The music in Aida is some of Verdi’s finest, especially that of the Ethiopian princess now Egyptian slave girl, Aida herself. The Triumphal March, when her lover Ramedes (who is, unfortunately, an Egyptian and therefore the conqueror of her father and her country – a classic opera tale) returns victorious from the wars, will be familiar even to non-opera goers. It is announced with blasts from masses of trumpets (in the Royal Opera House the other night, played from the auditorium heights) and often features live elephants or at least camels when the opera is performed outdoors as an arena spectacle; and usually at least a couple of horses and few dogs or so when it is in indoors. Or a man in a papier maché elephant head. But instead we had the aforesaid dancers and human sacrifices. Ah, well.


The Met's Triumphal March, with traditional live animals. I have seen this production in NY.


Our Aida was a Ukranian singer named Liudmyla Monastyrska, and what an excellent Aida she was too. Liudmyla was a rather last-minute replacement for the originally-billed Italian soprano who withdrew when she discovered she was pregnant.  It is a bit of a pity that Liudmyla is (like many of her colleagues) quite a hefty lady, and not very convincingly alluring, if I can put it that way; but she can certainly sing. It can be difficult to make the role of Aida very convincing, I often think, since she is a pitiful, wimpish character, put upon rather dreadfully by her father, and soppy with love for the tenor (the marvellous Roberto Alagna in this case, so who could blame her?) But there is no doubt that she gets lots of the best music, and Liudmyla delivered it marvellously. Our Pharaoh’s daughter, mean at first but then sad like all unrequited lovers, was sung by the Russian mezzo Olga Borodina (I agree with comment overheard in the foyer at half time: ‘she’s very reliable, but...I don’t know...rather static...’).
The program contains an article about human sacrifices in ancient societies, but I still find the relevance a bit stretched. The article even admits that it wasn’t something that ancient Egyptians got up to; hence the need for everyone to look like Incas, I assume. I don’t mind a bit of re-interpretation with my classic opera, but I could have done without the bare breasts and the disembowelling in this case.

I think there is a theme emerging with the productions at Covent Garden that I don't really like, and that theme is...David McVicar. When I next see another that is a McVicar directed/designed production, I'll be a bit more cautious.
A good review, with which I agree, and with several pictures of the production.
The review from The Guardian - they like Olga.
Image from: http://www.musicalcriticism.com/opera/roh-aida-0311.shtml
Posted by Annette Freeman at 11:13 PM