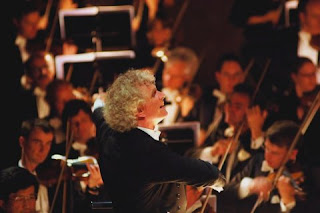 Tickets to the London Symphony Orchestra concerts at The Barbican seem to be sold out months in advance. When I managed to pick up a couple from last-minute returns and went to hear the orchestra being conducted by Simon Rattle, it became clear why: this orchestra is fabulous! At least, it was on this night, and I hope to hear more of them, to confirm this first impression.
Apart from Simon Rattle conducting, I was attracted to this concert by the program: Messiaen and Bruckner.
Now, I had never come across the music of Messiaen before Tamara scheduled Peter Hoerr, the wonderful the cellist, to play that haunting piece in our Birthday Concert; but it was mesmerising and I was keen to hear more. My friend David came along with me, similarly intrigued to hear more Messiaen.  What we heard (from our excellent seats in the middle of the circle in the impressive Barbican Concert Hall) was...can I think of a word? Stunning (in several senses)? Certainly surprising and extraordinary. The orchestra was stringless, which is a surprising thing for an orchestra to be. Yes, all woodwinds, brass and percussion. Lots of percussion. Lots and lots and lots of percussion, including a gigantic gong, played repeatedly (causing one lady bassoonist to cover her ears).
The music was entitled Et exspecto resurrectionem mortuorum (I await the resurrection of the dead), composed in 1964, and according to the composer, destined “to vast spaces: churches, cathedrals, and even out doors on high mountains”.  Its first performance was given in 1965 in the Sainte-Chapelle in Paris, and I must say I’m surprised they risked all that gorgeous stained glass to the massive reverberations of sound. I loved it. As the verse accompanying the final part reads: “And I heard as it were the voice of a great multitude”. We certainly did.
And after interval, the missing strings returned in force and David and I were introduced to Bruckner, at the end of which experience we were both complete fans. Rattle conducted Bruckner’s Symphony No 9 in D Minor – unfinished when the composer died in 1896 – without a score in front of him. He would lean over towards his players, stretching out his arms, cupping his hands, as if to pull the music out of them. The lead cellist, who was directly in my line of sight, gave his all and then some. The whole orchestra did. It was quite extraordinary.
Bruckner worked on his last symphony for nine years and still never completed it. It is said that he wanted it to rank in his oeuvre as Beethoven’s Ninth ranked in his. Certainly it is massively conceived. The program notes warned us to expect ‘agonised probing’, ‘nightmare visions’ and ‘disturbingly ambiguous harmonies and tortured melodic lines’. But I found the music rich, intense and beautiful.
Perhaps it was clever to program it after the Messiaen.
I like the way that symphony concerts are rather short (well, to an opera-goer they seem so). This gives a nice amount of time for post-performance supper. David and I enjoyed ours at Searcy’s at the Barbican, with a great view overlooking one of the internal lakes. David, who has lived in London for many years, was able to recall when the Barbican Estate was originally being built, and there were still fields of Blitz rubble around St Giles-Without-Cripplegate. His view of the Barbican? ‘It’s one of those buildings which look better from the onside than the outside.’
A good review here.

Image from: http://images.theartsdesk.com/index.php?option=com_k2&view=item&id=3228:london-symphony-orchestra-rattle-barbican-hall&Itemid=27
Posted by Annette Freeman at 9:10 PM