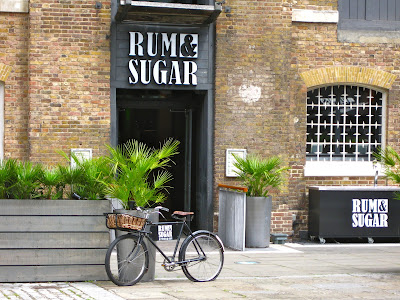 The docks of East London can be visited today via snazzy new streamlined rail connections. But when you get there you will find only a few remnants of the area’s wild and vigorous past as one of the great ports of the world. London still has a large port, but these days it is further upstream.

The Wikipedia entry on Canary Wharf gives lot of detailed facts and figures. But I particularly wanted to know why Canary Wharf is called Canary Wharf. Dear old Wiki tells us that:

Canary Wharf...takes its name from No. 32 berth of the West Wood Quay of the Import Dock. This was built in 1936 for Fruit Lines Ltd, a subsidiary of Fred Olsen Lines for the Mediterranean and Canary Islands fruit trade. At their request, the quay and warehouse were given the name Canary Wharf.

At Canary Wharf you will find not ships unloading fruit from the Canary Islands, but gleaming office towers housing the head offices of banks, lawyers and real estate developers. At East India Docks you will find a DLR (Docklands Light Rail) train station and trendy restaurants, not slave ships transiting captured Africans through to the sugar plantations and rum distilleries of the Caribbean.

Back in the day, the Docklands of London were wild places - ‘Sailortowns’ catered to the drinking, whoring and chandlering needs of the seamen; warehouses were filled with produce from the far-flung corners of the Empire; those who profited from the seafaring trade, from sail-makers to slave traders, built offices and houses big and small.

The slave trade was abolished in England in 1802, and slavery itself outlawed in 1833 [check]. But it took a 50-year campaign against rich and powerful vested interests to accomplish this. The English slave trade is sometimes hushed up, rarely discussed, but recent research reveals that London was the fourth-busiest slave trading port in the world in its heyday, and the most profitable. Slave traders increased their profits with vertical integration: they often also owned plantations and distilleries in the Indies. It was a sign of wealth from trade for London families to have a negro “servant”.


It is sobering to reflect on this ghastly trade when strolling the gentrified cobbles of today’s Docklands. But it is not the only misery the docks have known. As a place to live, the Isle of Dogs - a projection into the Thames around which the East London docks traditionally clustered - became a poverty-stricken slum in Victorian times, and into the twentieth century. But the decline of the docks - caused by the shrinking of the Empire, a decline in trade in commodities, and the moving of the main ports - left the area abandoned and increasingly derelict, though still with tight-knit poor communities.


In the 1980s the Docklands Development Corporation was sent in to rejuvenate the area. It wasn’t an easy task, even after securing the backing of Margaret Thatcher. The existing communities struggled to maintain their very existence in the face of the massive encroachment of shiny office towers. Battles were fought to save even a few rights for local residents. But the towers were built, and today as you sit around the park in Canada Square (a Canadian property development corporation was prominent in providing much of the funding for the project) you could be in the CBD of just about any bland twentieth century western city. San Francisco? Sydney? Pretoria? Toronto? Hmm...particularly Toronto.

This is not to say that Canary Wharf is not pleasant enough. For the hoards of office workers who commute in and out, it no doubt provides a very pleasant working environment. There are grassy parks, the waterways are interesting, there are fountains and trees and flower beds; cafes and restaurants, shopping malls and transport hubs. But of the locals there is no sign. And of the history, just a few artifacts, the occasional old brick wall or refurbished warehouse. It will need a few decades of patina to acquire any real character.
But the water reminds you of the ships, and it’s hard to forget those slaves. 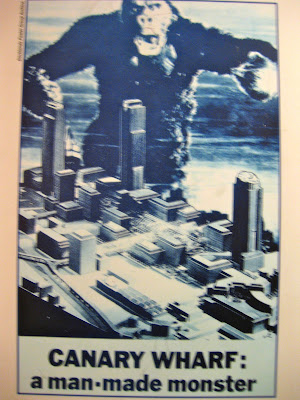 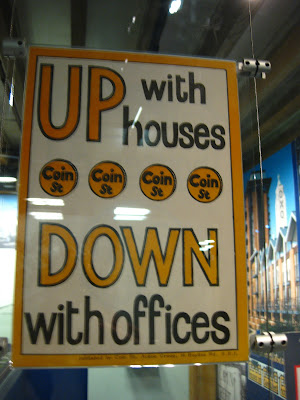 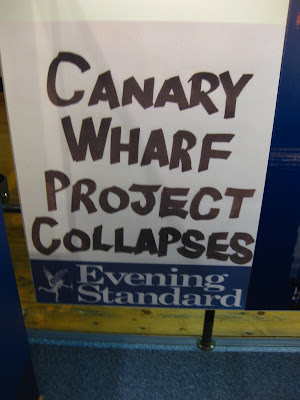 Posted by Annette Freeman at 5:57 PM