At the oldest opera house in Italy - older even than la Scala - where Rossini often had his opening nights, the locals do opera in the grand old style. They come to see and be seen, thronging the aisles chatting and socialising, until well after curtain-up time. Once the opera commences, they become fully engaged with what’s going on on the stage, cheering their favourite arias and choruses, wiping an occasional tear from an eye, interrupting on-stage proceedings to emote and cheer and applaud. The conductor plays along with them. If the applause continues a little too long, he stops to take an impromptu bow on behalf of his musicians. It is all thoroughly and enjoyably enthusiastic.

In addition, the Teatro di San Carlo has a beautifully restored red-velvet-and-gilt eighteenth century interior, luxurious seating and acoustics to die for. Conductor Richard Bonynge (widower of opera singer La Stupenda, Dame Joan Sutherland) has said that it is his favourite house. I am not sure if that is because of the acoustics or the enthusiastic locals - perhaps both.

The opera house was opened in 1737, and is the oldest continuously operating such venue in Europe. It is attached to the Royal Palace in Naples, and was founded by Carlo VII of Naples (hence its name). It did burn down in the early nineteenth century, but was immediately rebuilt. Rossini was the house composer and artistic director from 1815 to 1822, and he wrote ten operas during this time. Donizetti succeeded him, from 1822 to 1838, composing sixteen operas during that time. Verdi, Puccini, Mascagni, Leoncavallo and Cilea all staged works at the Teatro di San Carlo.

The night I attended the opera at the Teatro di San Carlo, Mascagni’s ‘Cavalleria Rusticana’ was on the bill. It is a short opera, but since we didn’t start until almost 9 pm, that worked out fine. It is also a tragically and histrionically Sicilian tale, full of vendettas, dishonoured and dishonourable women, murder of course, and a deservedly famous chorus of villagers singing on Easter Sunday morning.
A very hefty tenor with a beautiful voice, Stuart Neill, sang the role of Turiddu. He is, as the program synopsis put it, “no scoundrel, but neither is he a gentleman”. He has toyed with the lovely Santuzza, sung wonderfully by Belorussian soprano Oksana Volkova. Turiddu, however, has been toying also with Lola (Guiseppina Piunti), who is married to an even heftier baritone, Alfio (Ambrogio Maestri). The gents may have been built like barns, but the ladies were all over them. Everyone had huge voices. It did not end well. 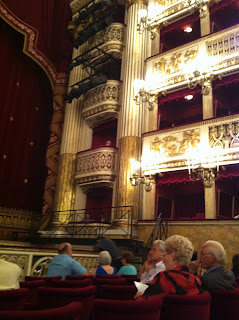 And here’s a curiosity. The director of the piece, Pinchas Steinberg, was unusually involved in the production. He came to the front of the theatre before curtain-up, dressed in a tuxedo, and read emotionally from a hand-written sheet of paper. The story he told was about “Bobo”, who was mentioned in the cast: “con la partecipazione di Bobo”. Bobo’s story was about being caught in an earthquake in which his mother died many years ago, being left deaf and dumb, and being shut up in an institution for fifteen years. From this fate he was rescued by the director, with who he now lives. Sure enough, a very short, elderly little man played three supernumerary roles during the performance, including the priest on Easter Sunday morning. He did an excellent job. A little more disconcerting was the participation of the director himself, who moved around the stage in the early part of the performance, and even wandered around the audience, tossing rose petals everywhere. Not quite sure what that was all about, but it was decidedly odd to see a director doubling as an actor.

Then after the show - Neapolitan pizza in a nearby restaurant, where we were thrilled to see the soprano also taking her post-performance dinner. A great night at the opera. 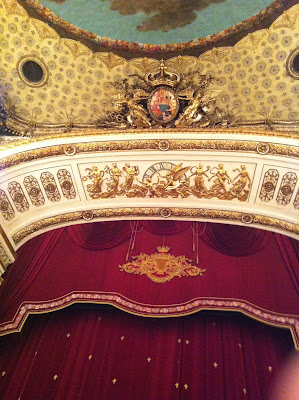 Posted by Annette Freeman at 10:49 PM