The Romans called Buxton ‘Aquae Arnemetiae’, the Victorians flocked to ‘take’ the health-giving waters, and Londoners know that ‘the water comes from Buxton’. Buxton is built on the River Wye, at the edge of the Peak District in the middle of England, not far from Manchester. It is in Derbyshire, and it was the Dukes of Devonshire that first spotted its potential as a spa town and developed the lovely Crescent buildings, the Pump House and other amenities.

Certainly Buxton is a ver verdant place, or as one local put it - “we’re built on water here”. The foundations of St Johns Church, built in 1811, had to be supported by a number of pillars going down to bedrock, so spongy is the spring-laden land on which it stands.

The Romans, with their unerring eye for thermal baths, first settled the area, but it came to prominence in the 18th century when it was developed by the Dukes of Devonshire, with a second resurgence of popularity in the Victorian era.

But it is the Well of St Ann that is at the heart of all this watery popularity. It’s been a shrine to St Ann since medieval times, according to Wikipedia. The well stands in the centre of town, near the old Pump Rooms, and to this day spouts warm water - a steady 28 degrees C - available to all. It is also bottled by the Buxton Mineral Water Company and sold far and wide - the company is the official supplier of water to the English Cricket team. The label on my bottle of Buxton Water reads:

Our water fell as rain water 5,000 years ago on the rolling hills of the unspoilt Peak District. During its deep underground journey, it slowly filters, collecting lovely minerals which give Buxton water its unique balanced and refreshing taste. Day after day it rises naturally at St Anne’s Spring, in the heart of Buxton town.

Wandering in to St John’s Church one Saturday in July at the beginning of the Buxton Festival, we happened across a lot of busy people who had just finished decorating some large wooden shapes with clay, and leaves and petals, to make the pieces of two large dioramas. Upon further enquiry, we learnt that they were preparations for something called “Dressing the Wells”. The decorations made in the church were on their way on various local trucks to the Well of St Ann, and another well in the Higher Buxton marketplace) the highest marketplace in England, in fact). When we checked out the results, we found the colourful decorations in place around St Ann’s Well - but the supply of spring water still gushing unaided and free from deep underground.


The Buxton Wells Dressing Festival seems to be some sort of semi-pagan ritual of thanks. The populace not only go to all the trouble to decorate their wells, they also crown a Queen of the Wells, and Bless the Wells. This year they are also holding a fun day, a carnival, a pet show and a spitfire fly-past. They seem to be very thankful for their springs.

Upon checking into the matter further, further information has come to light:

The Custom of Well Dressing is mostly unique to Derbyshire, its origins and history are not certain but its roots are said to come from pagan customs of making offerings to Water Gods, many Wells were thought to have healing powers and during early Christian times offerings continued to be made, as a result some Wells were dedicated to Christian Saints as St. Ann’s Well in Buxton.

A Well Dressing is a picture wholly made up of natural materials on a base of clay housed within a wooden frame.The picture is a collage of flower petals, leaves, moss, bark, seeds etc. Of varying colours and textures which with the skill of the dressers bring the subject matter to life. Each Community has slight variations in the method used to make a dressing but the general principles are the same.

The things you find in Deepest Rural England. 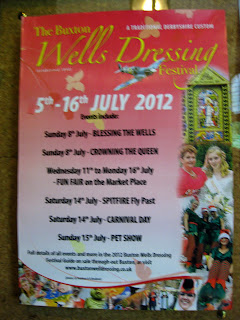 Posted by Annette Freeman at 11:48 PM