I know that the regular readers are probably waiting with bated breath for the Birthday Instalment. Forgive me if it is brief -- all eyes are on The Concert tomorrow night. The artists are all in town, and have been rehearsing for days at a secret location (it is not really secret - it is in Brixton). I've seen the "play list" and it is going to be divine. Unlike the reviews of "Anna Nicole - The Opera" which opened at Covent Garden last night. Those disappointed critics should get themselves down to St Bride's, Ludgate Hill, tomorrow evening.

Meanwhile, it has been great fun catching up with the first of the guests arriving from far flung points (well, from Canada, anyway). Thanks to the hospitality of Otto at The Don Restaurant in St Swithin's Lane, the Actual Birthday was celebrated with a cosy group of close friends (think IP law and adventure trekking) and some excellent wines. We were given use of a private room in what was once a domed brick port cellar - The Don has an interesting history, and I can do no better than to give you the story from their website: 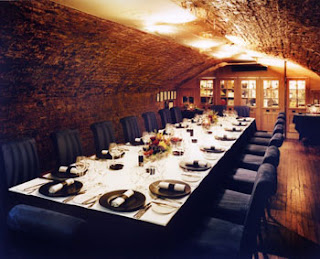 The spirit of The Don has been an integral part of 20 St. Swithins Lane since 1798 when the young Perthshire Scot George Sandeman took over the site as the cellar for his port sherry and wine company. The black-caped figure of The Don with his flat black sombrero has long been a symbol of excellence in the world of ports and sherries.

Those ports and sherries were shipped to London from Oporto and Jerez on the Iberian Peninsula in their handsome wooden casks, which were lowered down into the basement bottling cellars by the handturned Capital Patent Crane. The Crane, which was at that time considered a remarkable feat of engineering still stands in the shed that is today the entrance to the Don Restaurant and Bistro.

The tradition of generous hospitality and fine restauration has always run deep at 20 St. Swithins Lane. One of the younger Sandeman lads wrote thus of a dinner here in 1814:

"I dined at my uncle's in St. Swithins Lane at six o'clock. Such late hours I dislike - otherwise things were most agreeable. The party consisted of six French gentlemen connected with the wine trade. We had variety of fine wines, clarets, ports and other kinds whose names were quite new to me. I was tempted to take five or six glasses of Madeira, besides some others. Not being accustomed to such liquors, I felt some degree of fever through the night but my head was not affected at all."

Ports, sherries, and those Madeiras continued to be bottled here until 1969 when the now world-famous 'Sign of The Don' was lowered from its site high above Number 20 St. Swithins Lane and shipped to Oporto where it has been hanging in the Sandeman Museum.

George Sandeman, the present chairman, thought it appropriate that the sign should be returned from Oporto to its orginal home at 20 St. Swithins Lane, trusting that the spirit of The Don would inspire a new generation of enthusiastic connoisseurs.

And so to our lovely evening at The Don...here are the pictures, worth a thousand words, I'm sure. 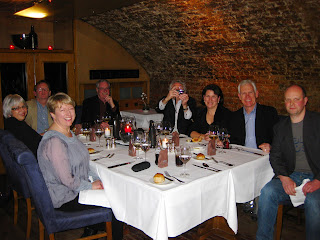 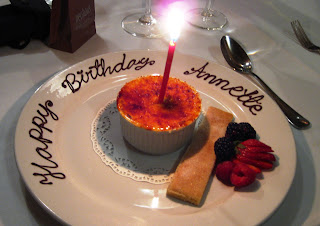 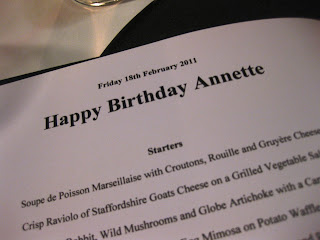 Posted by Annette Freeman at 12:51 AM