I know you have all been waiting, breath bated, for the second (and concluding) instalment of 'the Wikipedia Plato'. Here 'tis....
Can the theory of Forms survive the attack in the Parmenides?
Plato’s writings stand out from many philosophical texts because of the skilled, and often entertaining, literary and dramatic form he chose to use. His lively dialogues are often filled with action and characters, and we are usually given a setting and a framework for the action, before audacious and challenging ideas are introduced.
Let us consider the literary and dramatic devices used by Plato in the ‘Parmenides’. We are, as in some other dialogues, placed at several removes from the time and characters whose conversation we will be reading. The conversation is between a very young Socrates (estimated to be about 18 or 19 years old) and the venerable and respected Parmenides, a philosopher with whom Plato did not conspicuously agree. Also present is the younger philosopher Zeno, known for his clever and provoking paradoxes. We hear this conversation about fifty years later, recited from memory by Antiphon, who was not even present himself. He had learnt it from Pythodorus, who was there at the time. Antiphon, who appears to have given up philosophy these days to raise horses, is prevailed upon to recite the conversation from memory (a remarkable feat, especially considering the complexity of Part II – are we meant to have a doubt about the accuracy of the whole?). We are thus hearing the conversation third hand, and very remote in time. There is no-one left who can verify the accuracy of the report. There seems to be room for doubts about its veracity. 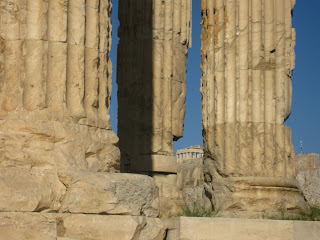 This is not the only one of Plato’s dialogues where such framing is used, although this one is especially complex. However, one of the more remarkable (and unique) features of the ‘Parmenides’ is the role played by Socrates. In almost all the other dialogues, he is an experienced and respected philosopher, who plays the role of questioner. He puts forward propositions to his interlocutors, who come from many different walks of life, and engages then in dialectical discussion, elucidating matters he finds contradictory and leading discussions aimed at finding the truth of the particular subject under discussion. In the ‘Parmenides’, the roles are completely reversed, with the grey-haired Parmenides leading a very young Socrates through the same process – with a similar debilitating effect upon his initial certainties. Indeed, even to find Socrates espousing certainties at all is unusual; he has a reputation from the other dialogues of frequently claiming to ‘know nothing’. Certainly his procedure is to lead his listeners through a proposition, rather than to expound doctrine or theories. How strange it is in this case, then, to find the young Socrates so confidently proclaiming his ‘theory of Forms’.
It is also a strange experience, for readers of Plato’s other dialogues, to find the character Socrates bamboozled and puzzled. Although Socrates often expresses himself to be in doubt – seems even to relish being in doubt – he is rarely if ever left completely at a loss by one of his interlocutors.
It is not, however, a unique experience for the reader to be left in a state of puzzlement, or aporia, at the end of a dialogue. Indeed, this is consistent with the way in which Plato teaches his readers, encouraging deep thought about the issues discussed, without spoon-feeding the ‘answers’ to his readers.
With this framing and the dramatic situation in mind, what might we conclude about how Plato wants us to see this attack on the Forms, one of his most central propositions? Firstly, the remoteness and potential unreliability of the very conversation being related cautions us not to take everything at face value, but to question what we are hearing/reading. This, along with the brash confidence, soon undermined, of the youthful Socrates, could be taken as a warning – or encouragement – to remain cautious about the theory of Forms themselves, not to consider them a full-propounded theory. 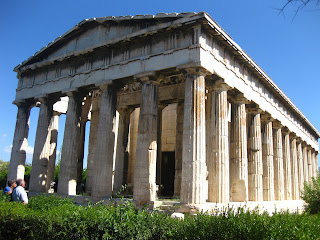 In fact, looking at the careful arguments raised, the sometimes invalid responses, the emphasis on training, and the siting of the discussion in Socrates’ youth, it seems reasonable to think of the ‘Parmenides’ not as an attack on the Forms, but rather as an exploration. It seems likely that Plato wants his readers (and wanted possibly himself) to work through various weaknesses in the theory, to consider several problems that should be considered, and indeed to expose arguments against the theory which might be shown to be spurious.
Note for example that Zeno is known historically for his paradoxes. In the ‘Parmenides’, his role is that of the paradox-proposer. His book, which is discussed by the assembled group early in the dialogue, and from which he has been reading, defends his friend and mentor Parmenides’ theory (‘that all is one’) in a paradoxical way: by arguing ‘that all is many’, and then showing how that proposition cannot be true (thus supporting the opposite view). What should we make of the inclusion of this character in the ‘Parmenides’, especially in the light of the antinomies of Part II? I suggest that we are being alerted to judge the dialogue of which Zeno is a part with an eye to paradox and inconsistencies, in other words to carefully critically appraise what follows.
Throughout the ‘Parmenides’ there is implicit and explicit emphasis on training. The casting of a very young Socrates at the feet of an old master philosopher sets the scene for this. Parmenides and Socrates have this exchange, towards the end of the Part I discussion:
Socrates: ‘I don’t think I have anything clearly in view, at least not at present.’
Parmenides: ‘Socrates, that’s because you are trying to mark off something beautiful, and just, and good, and each one of the forms, too soon’, he said, ‘before you have been properly trained...while you are still young, put your back into it and get more training...’
Parmenides mentions the need for training several times at this stage, and his exercises in Part II are intended to be just that: training for the young philosophers. We can understand from this that what we are witnessing is a dramatized exhortation to examine the theory of Forms from all angles, to test its limits, to beware of paradoxes and antinomies and false premises. It may be that, in the end, the Forms do not survive such an examination, but the ‘Parmenides’ surely does not conclusively answer that question, as witness the many commentaries have been written on just how the arguments play out.
Why posit Forms (reprise)?
At the end of Part I, having canvassed a number of objections to the theory of Forms, Parmenides concludes that there is no relationship between Forms and the physical world at all. If they do exist, we have no access to them. Should we consider that problematic? Parmenides seems to think so, despite his relentless dissection of Socrates’ proposals. He says, in a passage in defence of the need to successfully posit Forms:
Surely you would say that if in fact there is knowledge – a kind itself – it is much more precise than is knowledge that belongs to us. And the same goes for beauty and all the others...if someone...won’t allow that there are forms for things and won’t mark off a form for each one, he won’t have anywhere to turn his thought, since he doesn’t allow that for each thing there is a character that is always the same. In that way he will destroy the power of dialectic entirely...What then will you do about philosophy? Where will you turn, while these difficulties remain unresolved?
Gill expresses this outcome with reference back to The Cave analogy in ‘Republic VII’. The prisoners in the cave have at least the opportunity, if freed of their chains, to ascend from the cave and see the Forms in the light of the Form of the Good. They may possibly return to the cave and look again at the shadows there in the light of their acquired knowledge of the Forms. In a world with no access to the Forms, no such revelation is possible.
We have no fixed criteria by which to explain our judgements, and even if there were such criteria, they would be irrelevant, since the causal link between forms and appearances has been removed. The world we are left with at the end of the final argument is intrinsically unstable.
What Parmenides seems to be pointing to in the passage quoted above is the striving for a metaphysical understanding of the world, an unchanging yardstick by which we can understand how the world works, the ultimate goal of dialectic and philosophy. If Forms are abandoned or are inaccessible, we are left without any metaphysical explanation of our world (at least until we find another). This is certainly ‘the greatest difficulty of all’.
Far from being an all-out attack on the theory of Forms, the ‘Parmenides’ seems to me to be a painstaking and thought-provoking attempt to test the theory, set in the dramatic context of a senior philosopher instructing a younger – one whom we know will rise to great heights. At the end of the exercise, despite many unsolved problems, the Forms remain a possible metaphysical explanation, with good reasons still to posit them, and to try to work through the difficulties. In true Platonic style, we remain in a state of aporia (puzzlement), hopefully to our ultimate benefit.
Posted by Annette Freeman at 11:33 PM