The Brera Gallery in Milan is a treasure trove of Italian religious art, leavened with some very good eighteenth century Romantic pieces. Wiki gives the history of the Gallery and its associated schools, and the page shows a great selection of the works. There's no doubt this is one of the principal art galleries in Milan -- but why is there an enormously over-sized statue of Napoleon in the courtyard, and why such an emphasis on religious art?

The Wiki entry for the gallery says, rather coyly: "the Academy acquired the first paintings of its pinacoteca during the reassignment of works of Italian art that characterized the Napoleonic era." In fact the Gallery is founded on over 400 works removed from churches and convents that were suppressed in the Napoleonic period. They include works by G da Fabriano, P. della Francesca, Bramante, Crivelli, Raphael, Bellini, Caravaggio, Veronese, Tintoretto, Tiziano, Rubens and Van Dyck. The Euromuse site expands on this fascinating quirk in Italy's history:


One of the leading public galleries in Italy, the Brera differs from those in Florence, Rome, Naples, Turin, Modena, and Parma in that its origins lie not in the collections of the nobility, princes or courts, but in the cultural politics of the state in the Napoleonic era, reflecting the democratic concepts of the French Revolution.

Like the Gallerie dell'Accademia in Venice and the Pinacoteca in Bologna, the Brera was originally founded as an appendage, for didactic ends, to an academy of fine arts. However, the Milanese gallery soon took a different direction and, to meet the political requirements of the capital city of Kingdom of Italy, was transformed into a large modern national museum in which works of all the schools of paintings of the conquered territories could be safely preserved to be studied and compared, and to be seen by the public at large....

In 1805, when Napoleon was crowned king of Italy, it was decreed that works of art requisitioned in the departments of the kingdom should be brought to the Academy in Milan, where those by the most famous artists would be displayed in the gallery. Additions to the collections in 1850 included the 'Brera Alterpiece' by Piero della Francesca, the 'Pietà' by Giovanni Bellini and a number of paintings acquired from the famous Galleria Sampieri of Bologna. In the same period numerous detached frescoes were brought to the gallery from various churches; today the gallery has what is possibly the largest collection of this kind.

Although the Gallery moved on from this period and continued to expand its collection (including a bequest of 20th century art), Napoleon's plundering of the churches forms the core of the works on display, and explains that curious religious bent -- and the scraps of frescoes shorn from their original walls.

One of the most famous attractions in the Gallery is Mantegna's Cristo Morto (mentioned by this blog earlier). (Full name: Lamentation of Christ (Mantegna) by Andrea Mantegna. c. 1480). The painting is known for its odd perspective on the dead Christ, emphasised in the Gallery by its being hung at about knee-level in a darkened room. It's displayed near Giovanni Bellini's 'Pieta' (c. 1460), another very moving portrait of the grief of Christ's mother.

Amongst several other highlights, there's a Piero della Francesca, 'Holy Conversation' c. 1472–1474 -- strange and haunting figures; and 'The Marriage of the Virgin' by Raphael c. 1504 (with a building in the background looking remarkably like the the Bramante chapel in Todi.).

But perhaps you find room after room of religious themes can drag a bit after a while? Yet another allegorical story? Yet another Madonna? But every now and then, one of the huge canvases (originally adorning massive cathedrals), the work of a genius will leap out at you. Even if you've never concerned yourself with art history, there are some painters or paintings that just clearly go that one level more. One such in the Brera is Ruben's 'Last Supper' (1630-31). The vigorous flowing lines, the look on the face of Judas as he stares out of the frame directly at you, the dog lying under the table (more faithful than the man?) Genius.

As your visit to the Brera winds to its conclusion, you reach the nineteenth century works, and possibly the most reproduced of all the pictures in the Gallery - 'The Kiss' by Francesco Hayez (1859), a ridiculously Romantic effort, but no less well-loved for that.

The Gallery's history has not been without its drama. Euromuse tells us of another struggle in the 20th century: "When Franco Russoli became director in 1973, the Gallery had suffered from twenty years of inadequate funding, poor maintenance and lack of space. He brought this situation dramatically to public attention in 1974 by closing the Gallery; the positive outcome was the launching of the 'Grande Brera' project, which aimed to enlarge the Gallery by making use of the 18th-century Palazzo Citterio, together with some rebuilding of the Brera itself."

And so, having contemplated it all from Napoleon to 'Il Bacio', your visit is done. 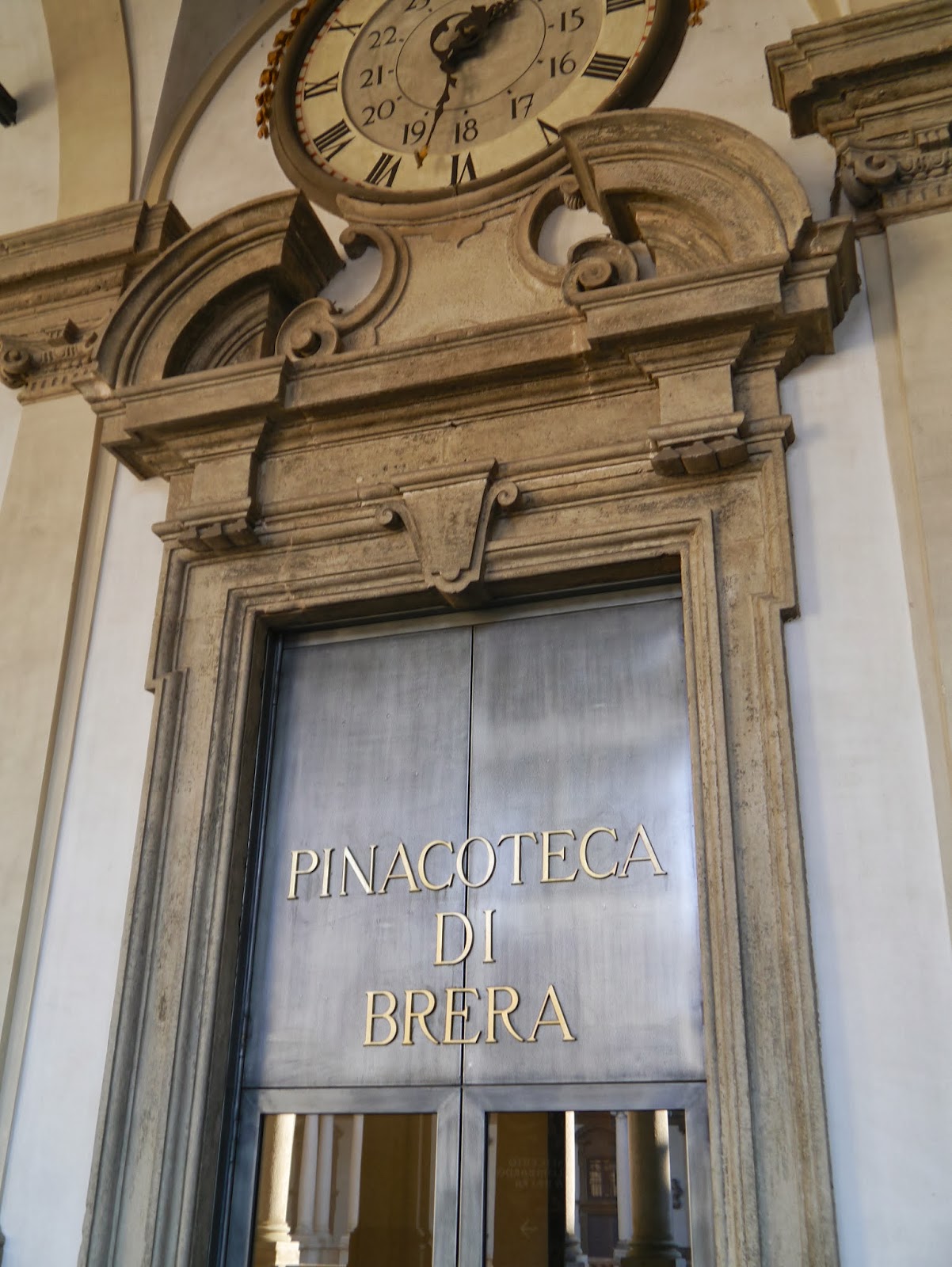 Pictures of the paintings are from the Wiki site.

Posted by Annette Freeman at 12:28 AM