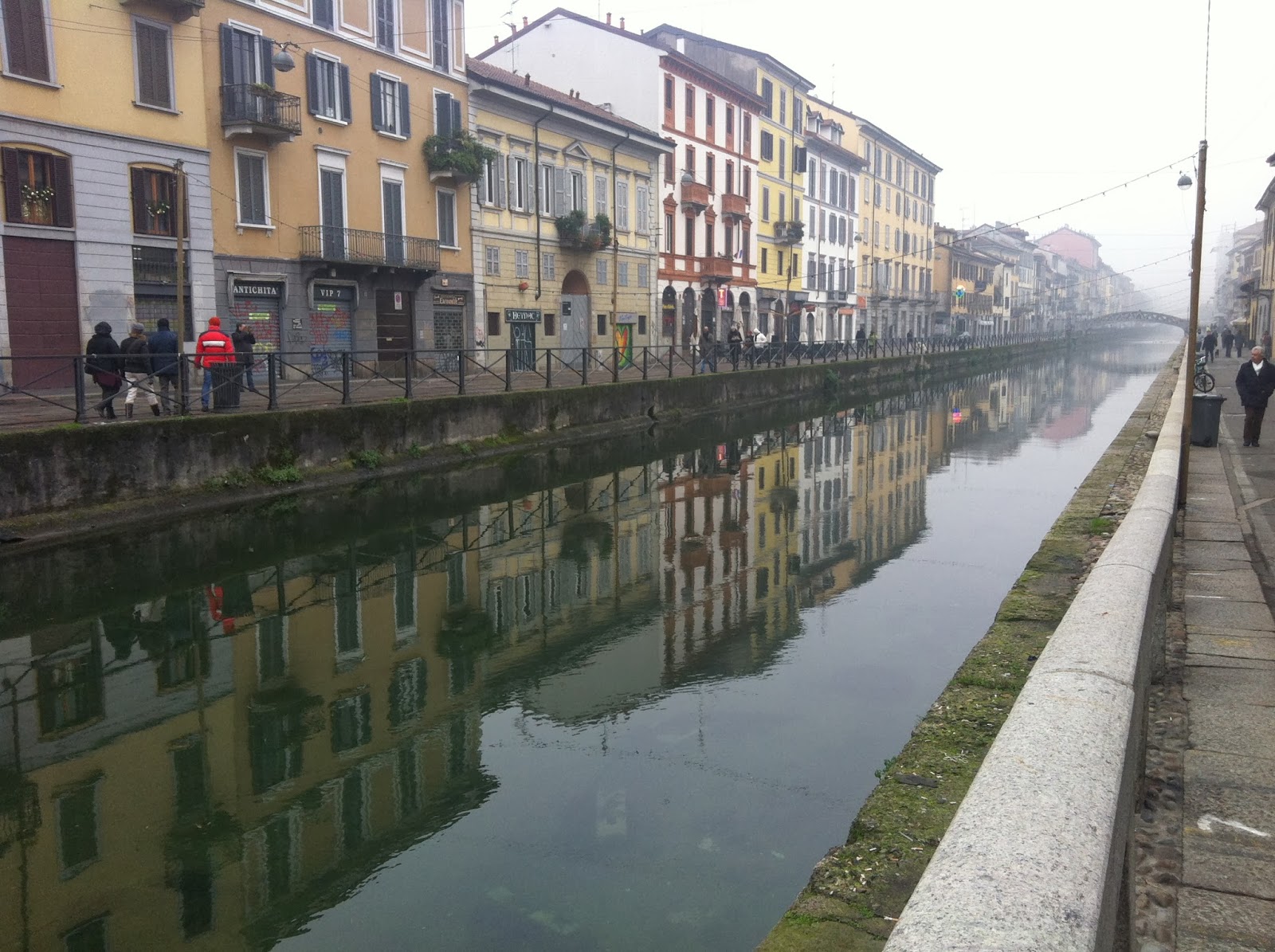 Milan is situated more or less in the middle of northern Italy - or if not quite in the middle, then a long way from the seas, both the Mediterranean and the Adriatic. What a surprise, then, to find that it had once been an "inland port", connected to both, by a series of canals which linked it to the big rivers.

Milan's canal system dates right back to the time of Leonardo da Vinci, who designed some of its lock systems. In the early twentieth century most of the inner canals were covered over and replaced by tram lines and roads, but a remnant remains, in the 'Navigli' district.

The canals form an evocative link with the past. Here's what the information sign at the confluence of two of the larger remaining canals tells us:


The Pavia Canal, which as its name suggests connects Milan with the city of Pavia, was not completed until the Napoleonic period. It begins at the canal basin known as the Darsena, under the so-called Trofeo bridge. Locks enable it to negotiate differences in level at various points along its 33-km route, culminating in the visually striking sequences at the point where the canal flows into the Ticino river.

When the canal opened to navigation in 1819, Milan was finally connected via the Ticino and Po rivers to the Adriatic Sea. This project, which began in the 15th century with the construction of the Bereguardo Canal (connecting the Naviglio Grande to the Ticino near Pavia) and the Martesana Canal (for which Leonardo da Vinci devised a system of locks to allow the waters of the Adda river to flow into Milan’s canal ring), made the city a crossroads between continental Europe and the Mediterranean.

Today, the banks of the two canals in the “navigli” district are lined with a whole host of trading concerns, art and craft workshops, bars and night clubs, making it one of the most vibrant parts of the city. The hub of “navigli” life is the Darsena basin, created in 1603 as an inner city dock. It is fed by the waters of the Naviglio grande and the Olona river (now underground) and in turn feeds the Naviglio Pavese. The city’s inner canal ring, which was covered over in 1929-30, also flowed into the basin through the Viarenna lock (present-day Via Conca del Naviglio).

You can take a canal-boat ride for a leisurely cruise along a couple of the canals, get a close-up look at the locks, and travel via the Darsena basin. Just for an hour though - not all the way to Pavia!

The Rough Guide gives more history, including a Shakespearean reference:


Improbable though it may seem, less than fifty years ago Milan was still a viable port – and less than a hundred years ago several of its main arteries – including Via Senato and Via San Marco – were busy waterways.

In the twelfth century, the first canals linked irrigation channels and the various defensive moats of the city. Later, in 1386, the Naviglio Grande was opened, linking the city to the River Ticino and thus Lake Maggiore. It was Gian Galeazzo Visconti, however, who was really responsible for the development of the system, in the fourteenth century to transport the building materials for the Duomo, especially marble from Lake Maggiore.

Travellers were also seen on the canals: the ruling families of the North used them to visit one another, Prospero and Miranda escaped along the Navigli in The Tempest, and they were still plied by the Grand Tourists in the eighteenth century; Goethe, for example, describes the hazards of journeying by canal. 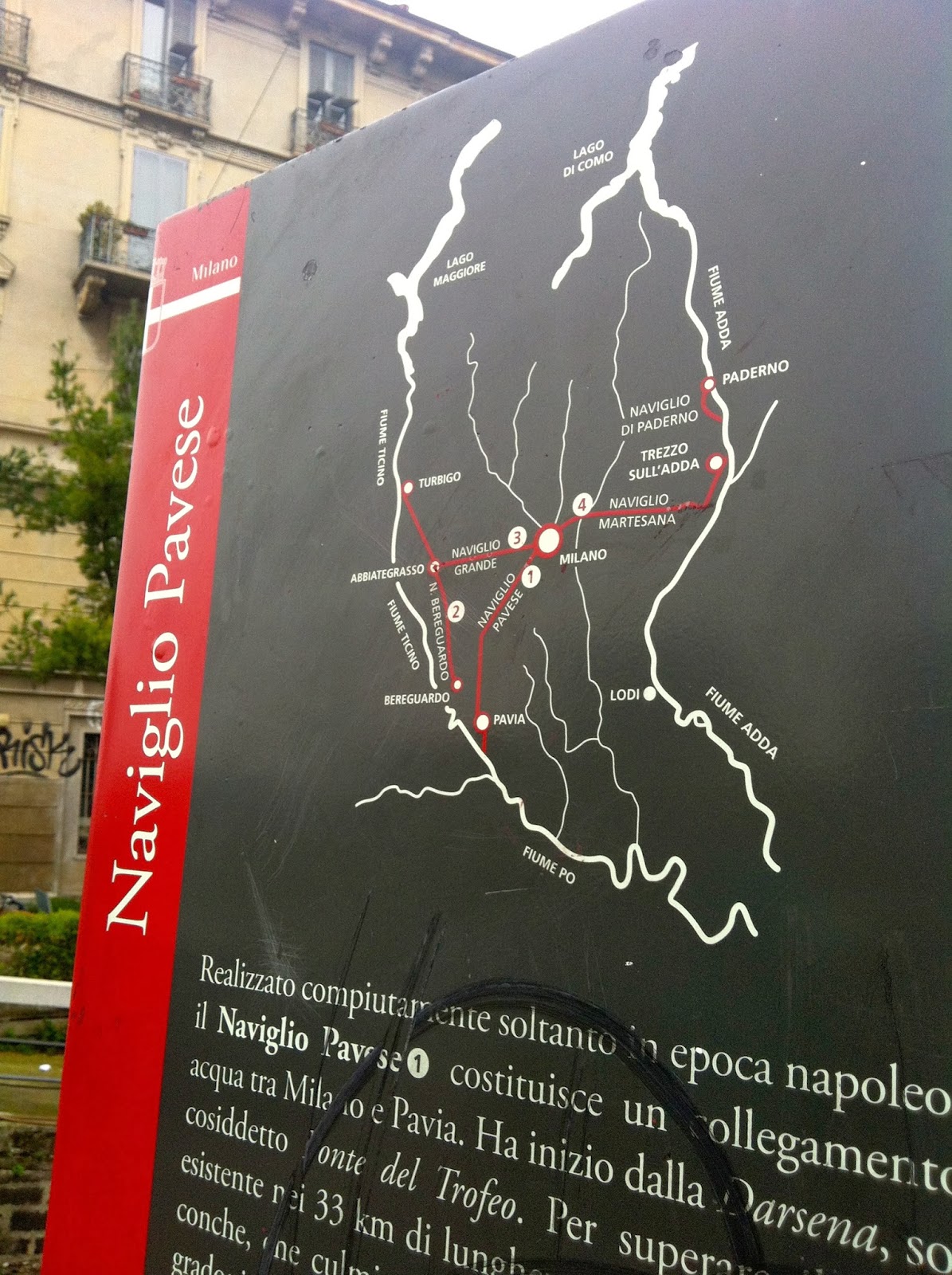 In the 1950s, desperately needed materials were floated in for reconstructing the badly bombed city but by the mid-1970s, only a handful of canals were left uncovered; the last working boat plied the waters in 1977. 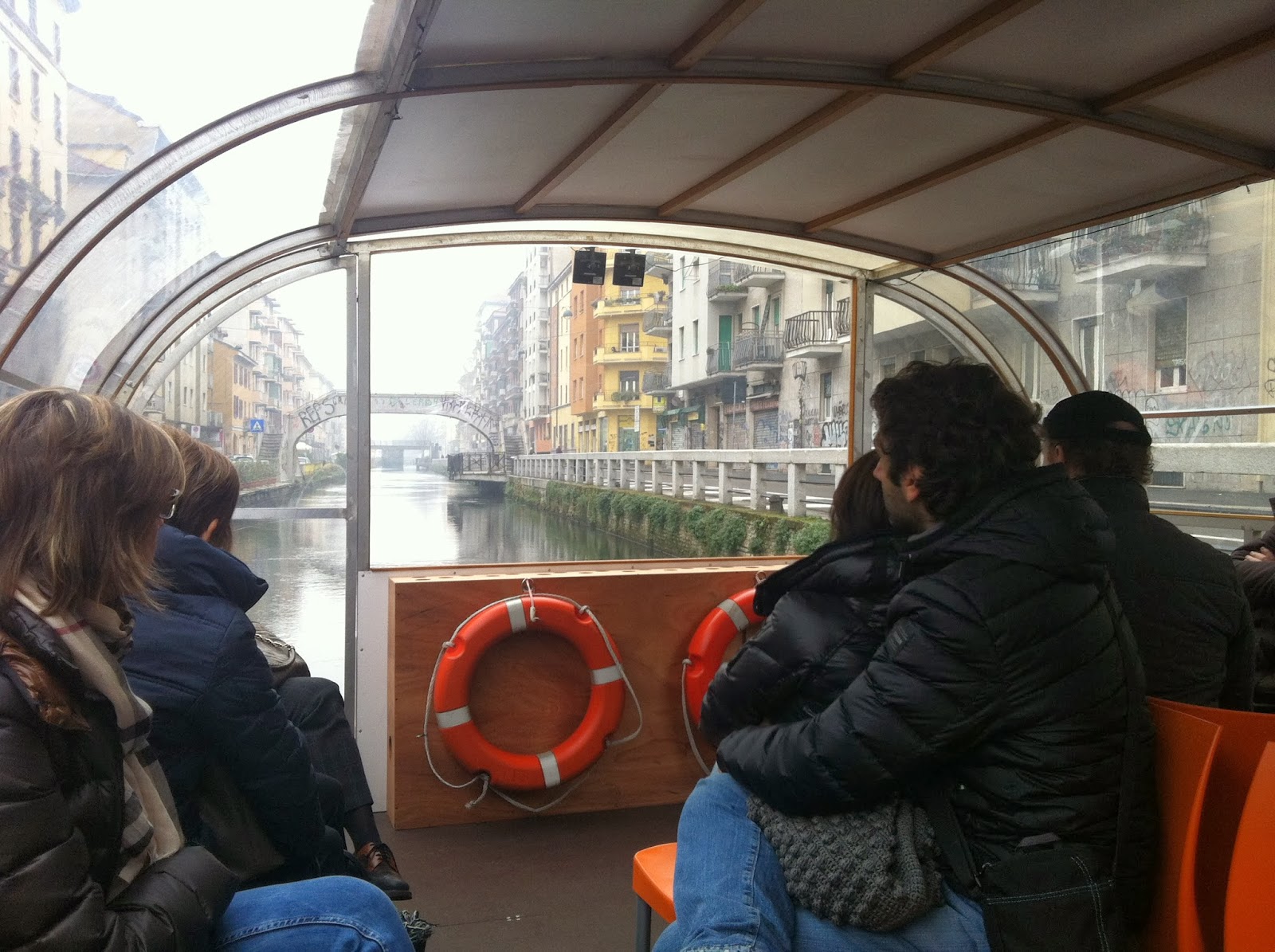 Have a look at the Navigli Lombardi site, which includes news and cruise details, plus some lovely pics of the canals on a less foggy day (!) and their further reaches.

Posted by Annette Freeman at 10:31 PM