A visit to Zurich would not be complete without a little taste-testing at the Sprüngli emporium on the Bahnhofstrasse; and such a visit will inevitably entail some sampling of the delightful little confectionery known as 'Luxemburgerli'. All this is true for me at least. 'Luxemburgerli', as you may or may not know, have to be eaten promptly, so they are not the sort of treat you find in the export market. They are a special Zurich thing to do.

So what are 'Luxemburgerli'? Tiny sweet macaroons in a huge variety of flavours. I see that Sprüngli  AG has registered the word as a trademark. Here's their version of the history of the treat, which they clearly claim as exclusively their own:


The young confectioner from Luxembourg who introduced a speciality from home to Zurich could never have imagined, even in his wildest dreams, that one day it would become the talk of the town and the most requested product at the Confiserie Sprüngli.

Unlike many other specialities on sale at the Confiserie Sprüngli, which can look back on 160 years of history, this extremely popular sweet delicacy does not originate from grandfather's recipe book, but rather from the Confiserie Namur in Luxembourg, with which the Sprüngli family has had friendly ties for generations. Confectioners from Zurich were working in the duchy as trainees at the time, and their young counterparts from Luxembourg had the equivalent right to work in Zurich .

One fine day in Zurich , towards the end of the 1950s, a young confectioner from Luxembourg started producing the speciality of his mentor at home. Initially, the product was anything but a top seller. The macaroons were sold, but without much enthusiasm. More out of embarrassment than anything else, the delicate biscuits were christened 'Luxemburgerli' after their place of origin, a name, incidentally, that is not used in Luxembourg itself.

Because it takes time and effort to make them by hand in a process requiring a very deft touch, the new speciality was by no means pushed, and when the young confectioner returned home it proved very difficult to find a worthy successor. 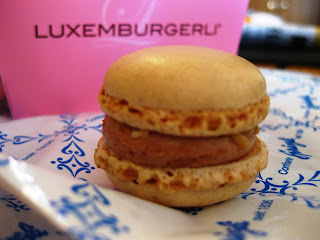 Over the years, however, the citizens of Zurich slowly acquired a taste for Luxemburgerli. Demand grew steadily and Sprüngli now produces an average of 650 kg every day, making them the most popular and best-known product in the Sprüngli range. Their fame has since spread far beyond Zurich and even Switzerland . A special place is reserved for Luxemburgerli in the shops, where they are sold loose or already packed in boxes.

Luxemburgerli come in the flavours vanilla, stracciatella, hazelnut, caramel, lemon, mocca, raspberry, cinnamon, Champagne and chocolate, though some are available on a seasonal basis only. They are sold within 24 hours and will remain fresh for a few days if kept in the refrigerator. But they are at their best, of course, on the first day. 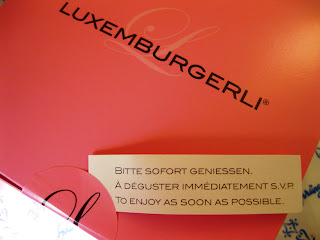 Hmm...650 kg sold every day?? Since each one must weigh only a gram or two, that's a LOT of Luxemburgerli. I enjoyed mine 'fresh' as exhorted, and very nice they were too.

In 2011 Confiserie Sprüngli is celebrating its 175th anniversary - David Sprüngli founded his company in Zurich's Marktgasses in 1836. They sign off their marketing materials with a slogan I think we can all applaud: