Possibly the best Rossini ever

'Possibly the best Rossini ever' is rather a big call, so let me qualify...Saturday evening at the Zurich Opera I saw 'Le Comte Ory' and enjoyed it so much that I am making the call that it was possibly the most enjoyable Rossini opera that I have ever experienced. The first half anyway. The second half was very good, but I enjoyed the first half more. It was wonderful.

It is a relatively rarely performed Rossini opera - certainly it had never before crossed my path - but I am going to rave delightedly about Cecilia Bartoli, the soprano with the extraordinary tremolo. And about Javier Camarena, a divine Mexican tenor. And I will certainly also give accolades to Rebeca Olvera (also from Mexico) who sang a delightful trouser role; and Carlos Chausson, a wonderful bass baritone.

Cecilia Bartoli is a very big name in opera,and I was thrilled to bits to be able to snaffle a ticket to this performance: second balcony, great sound, somewhat restricted view - had to lean forward to see the stage, but it was front row. We all leant together. Especially when Cecilia made her highly anticipated entrance. She has sold 8 million CDs and clocked 100 weeks ranking in the international music charts. Her voice is considered a mezzo, but she can also sing soprano roles - it is a very unusual voice. She has a quite incredible coloratura technique that is stunning once she gets going. She is sometimes called 'The Queen of Agility'. She also sang very movingly and lyrically during the first Act. It was one of those religious moments in the theatre.

And all of this was in an opera with one of the silliest story lines in an art form known for them. My Program is principally in German, but I can give you a summary of the synopsis: 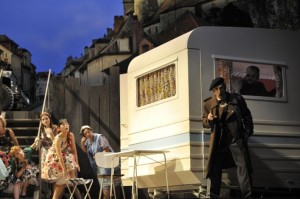 Count Ory is a nasty bit of goods, a libertine, who has spent the past eight days in a small village passing himself off as a blind hermit. In return for wine and food (collected by his off-sider Raimund) he dispenses advice, mainly to the maidens and matrons of the village. Their men are all away at the wars, and they are a bit, er, lonely. They seem far happier after spending a while with the hermit inside his retreat.

The original story is set in medieval times, since the men are away at the Crusades. However, in this production we're updated to the mid-Forties, and the Count is occupying a caravan. The Countess Adele (Cecilia Bartoli) is strangely melancholy and comes to consult the 'hermit'. Her brother is off at the war, and she has taken a vow of chastity, along with the other women, until the men come back. They've been away for five years. No wonder the women are depressed. The Count does his best to solve this little problem, and the inside of his caravan is revealed to us as a leopard-skin and red plush boudoir.

At first, the Countess is cheered up by being released from her vow of chastity, and turns rather gleefully to the young page Isolier (the trouser role). The 'hermit', who wants her for himself, is a bit annoyed. 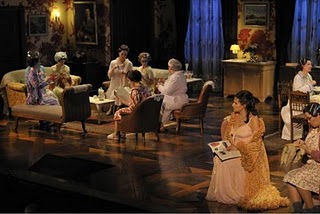 Anyway, to cut a long story short, in the second half the Count abandons his hermit disguise and dresses instead as a nun, along with 14of his comrades. They plead for shelter at the countess's castle during  a storm (where she and her 14 ladies are ensconced in their curlers and negligees). As you can imagine, we are treated to some rollicking scenes of drunken nuns with moustaches, etc., and then a slightly silly role reversal things where Isolier changes clothes with the Countess, and Ory gets them mixed up...and so on...it is opera buffa, after all. 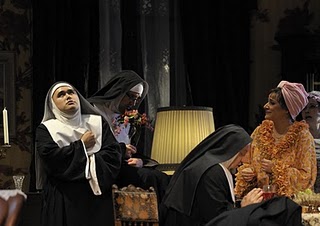 If Cecilia hadn't lived up to her spectacular reputation, the tenor, Javier Camarena, would have stolen the show. He produced such wonderful strong effortless singing, and was a funny actor besides. I rather liked the translation to the Forties (or perhaps it was the Fifties? but then where would the war come in? It was a French village). The production values were very high,the direction and choreography excellent, and the silly story was made very funny.

Somewhat amazing, on searching You Tube I found the following clip which seems to be a promo for the actual Zurich production that I saw (the voice over is in German although there is some English commentary later on). But you can see what the set was like.