...the seaside! Cue the barrel organ. This weekend I felt a burning need to see the sea – and hopefully some sun – so I took a train to Brighton, which seemed to be the nearest readily accessible sea. After about an hour and fifteen minutes I was indeed able to see the sea. Sea yes; beach, no. I just want to be accurate here.
The sea (actually The English Channel, I suppose) was very wonderful, crashing like it does, with seagulls wheeling overhead (I thought of trying to make an effort to remove hackneyed clichés from this blog, but really, how can you do better than ‘wheeling overhead’?) I love the sound of seagulls. It’s probably some childhood memory thing going on, since I was born and grew up beside the sea (well, technically my home town is at the mouth of a river, but the water is salty and there’s sand and seashells and seagulls.) The sun even shone for a while in Brighton today, making my day.
But beach? At Brighton they call it ‘the beach’, but really it’s pretty much all pebbles, some stretches of them quite substantial pebbles; even ‘rocks’ would not be too strong. However, since it was all I had, I enjoyed a nice walk along it, with the waves whooshing, the seagulls cackling, the little kids getting excited, and the Sunday crowds out. My objective was Brighton Pier, because it was the biggest thing around. It is a handsome old structure – I didn’t venture along the whole length of it, as a nasty wind was blowing up, rain clouds were gathering, and I didn’t want to ride on a fair-ground ride anyway.
Down on the “beach” promenade, the little shops doing business from “beach”-side huts and cabins under the esplanade were very interesting. There were lots of small artists and artisans, many purveyors of fish & chips, stalls selling all kinds of fresh seafood – even jellied eels (I’ve always wondered, but didn’t stop to check); and also a good number of psychics and palm-readers. They didn’t seem to be open for business – probably they just knew it was going to rain. 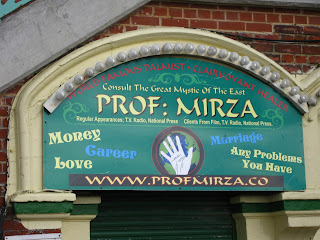 Brighton is in East Sussex, and is technically called ‘Brighton and Hove’; but I like its ancient name: Brighthelmstone. It appeared in the Domesday Book in 1086 under that name. But its heyday began in the 18th century when it emerged as a spa resort – bathing in its seawaters was considered healthful. Perhaps it was, after grimy 18th century London. Then when the railways boomed in the 19th century, there was no stopping the day and weekend trippers pouring in from the big city – and it is ever thus today. Take me, for example.
I ensconced myself for one night in The Grand Hotel, an old beauty looking over the sea. The Grand had friendly staff, good food, nice views, and about two hundred BBC people on a conference jaunt. Ah, well. I’ve been on conference jaunts myself (and have often thought that it must be the pits to be a regular guest in a conference hotel when the conference is in full swing.) Thankfully they all went somewhere else for dinner. I ate a somewhat deconstructed version of fish & chips (with mushy peas). How could I not? In Brighton?
The big attraction here for me (after the sea, of course) was the gobsmacking Brighton Pavilion, home of George, the Prince Regent. But I’m saving that for another blog post, since there is so much to say about it. For now, I have my seaside memories... seagulls wheeling overhead..
Map from: http://en.wikipedia.org/wiki/Brighton
Posted by Annette Freeman at 6:28 PM