I enjoyed a happy philosophical moment the other day, when I went to a meeting with Dr Sarah Patterson (‘Early Moderns’) to discuss the many and various shortcomings of my draft essay on Descartes. This involved an ascent into her aerie on the fourth floor (no lift) of one of the row houses on Gower Street, Bloomsbury, fronted with a blue-painted door and occupied by various members of the Birkbeck Philosophy Department faculty. I arrived puffing a bit from the climb, and because I was running late (got momentarily lost in streets called ‘Virginia Close’ and Woolf Mews’).
The upshot of the problem with my essay was that it didn’t really answer the question, mainly because I became sidetracked by something I thought more interesting than the matter upon which the question focussed. The choice was to change the question or change the essay. Our solution to this was philosophical.  We decided to change the question. (This, I might note, is not an option which would generally have been available in the world of Law).
So the question: “According to Descartes, the perfection of our creator means that we cannot go wrong when we assent to what we clearly and distinctly perceive. How, then, does he account for the prevalence of human error?”
Has become: “How does Descartes’ conception of God shape his conclusions about judgement error?”  It has potentially become this, anyway, since I now have some work ahead to restructure the essay, rid from it some egregious errors, and – it seems – formulate the question any way I like.
To give you some context, in his famous ‘Meditations’ written in 1639 Descartes tries to find a method of confirming some foundational truths, such as the existence of his own self (he’s the philosopher to whom is attributed ‘cognito ergo sum’ –  loosely, ‘I think therefore I am’).  In his First meditation he considers the point that an omnipotent god could deceive him as to the very existence of the external world, or might have ‘brought it about that I too go wrong every time I add two and three or count the sides of a square’. This results in the puzzle that god, even though supremely good, nevertheless appears to permit the meditator to be at least sometimes deceived.
Later on, as Descartes develops his enquiry into this puzzle, he draws a distinction between matters of ‘privation’ and matters of ‘negation’ – terminology drawn from Aristotle, and called ‘Aristotelian jargon’ by one commentator (there is indeed a lot of jargon in Aristotle). Here’s one description of the difference: a car may be well manufactured, although it may have the comparative imperfection of not being as good as a more deluxe model (this is ‘negation’); but the same car may drive off the road not because of some defect in its manufacture but because of a careless driver (this is ‘privation’). There is no objection (says Descartes, and others) to a craftsman, or creator, making something that is less than infinitely perfect.
In fact, since we are all finite, we cannot expect that god would have created us perfectly. So ‘negation’ is acceptable and understandable and not morally reprehensible. The mere absence of good does not mean that there is evil, otherwise it would follow that non-existent things were evil.
However, if something is missing which ought to be there (such as sight in a blind man) this is ‘privation’. Errors of privation arise, says Descartes, when we humans exercise our (admittedly very broad) free will, and basically drive the car off the road.
“...the scope of the will is wider than that of the intellect; but instead of restricting it within the same limits, I extend its use to matters which I do not understand. Since the will is indifferent in such cases, it easily turns aside from what is true and good, and this is the source of my error and sin.” (Fourth Meditation). 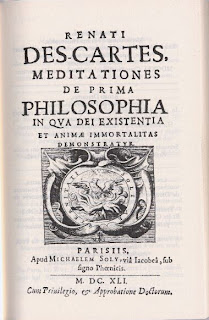 This question of human error is endlessly fascinating.  Descartes has a few other explanations also, such as that god is running a whole universe of which we are a tiny part, and therefore we cannot expect to know whether our errors are really errors in the greater scheme of things; and he also says that our natures are ‘very weak and limited’ compared to that of god which is ‘immense’ so it is ‘no cause for surprise’ that we cannot understand all of god’s actions: considerations which resonate from the earlier medieval philosophers such as Thomas Aquinas.
Everyone wants to know why there is bad stuff in the world. I don’t think that’s too strong a statement. Some just throw up their hands and say ‘S*** happens’ or ‘it’s the Devil’s doing’.  Philosophers like to investigate further. In the course of our discussion, which strayed a little from the shortcomings of my paper, Dr Sarah said “this question of error is very interesting”, which is philosophical-speak for “I am totally in thrall to this idea and am going to spend the next year of my life investigating it”. Sure enough, she confided that she was, at that very moment (probably meaning for months before and for months to come) writing a paper on the very subject. Who better to criticise my paper on the same subject? I regard this as a very special educational privilege.
But before I leave Descartes and the (as yet) flawed paper, I should mention why it didn’t answer the question as posed. Before Descartes got to grips with the question of how error arises, he had to consider whether god in fact exists. This is another one of those questions asked by more than just philosophers, I think. The interesting thing that sidetracked me from the original question was an article I read by a philosopher named Annette Baier (how encouraging that there exists such a thing as a professional philosopher named ‘Annette’). She proposed that Descartes’ conception of ‘god’, while couched in the theological language of his day, was in fact code for something far more psychological – basically, ‘god’ to Descartes could be equated with self-consciousness (I’m not sure that this idea has taken off in philosophical circles – Dr Sarah seemed unimpressed). Baier claims that by the Third Meditation the idea of ‘god’ has become a perfect being which the meditator may aspire to imitate, rather than a mysterious powerful being whose motives can never be understood. She says that Descartes’ ‘god’ bears more resemblance to self-consciousness than to the orthodox Christian God, but that in view of the heretical nature of such a view in 1639 (in 1633 Galileo had been convicted for heresy by the Inquisition for claiming that the Earth circled the sun, and Descartes had been lying low with his own theories on that subject), and also possibly because Descartes enjoyed constructing puzzling texts, he disguised this philosophical view in the Meditations.
That’s even more interesting, don’t you think?
In any event, it is back to the proverbial drawing board for the essay, though there is a lot to be salvaged now that I can make up my own question. I did enjoy sitting in the Gower Street aerie, asking an expert “so what about evil in the world?” and having a discussion that went beyond ‘S*** happens’. Not that we solved the problem, of course