Despite years of ‘Eng Lit’ I was, I am ashamed to admit, completely ignorant of the English playwright Terence Rattigan. But since seeing a production of his play ‘Flare Path’ I hope to see a lot more of his work. This year is the centenary of his birth, and there are several Rattigan plays on or planned, so I have high hopes.
The action in ‘Flare Path’ takes place in the residents’ lounge of a hotel in Lincolnshire in autumn 1941. Most of the guests are RAF personnel from the Bomber Squadron.  There are wives and girlfriends, a crabby landlady (with a heart of gold, of course), a Hollywood actor who does a ‘tale of Two Cities’ thing at the end (“it is a far, far better thing I do...” etc), and a charming Polish Flight Officer with an even more charming wife (an ex-barmaid now Countess Doris).
Rattigan himself was a Pilot Officer in the Bomber Squadron during the WWII offensive in answer to the Blitz, and wrote the play while on a ‘shaky do’ himself (RAF wartime slang for a difficult, dangerous or unsuccessful RAF raid). There is a real ring of authenticity to the whole play and characters, who are generally very British, reserved, joking in the face of mortal danger. Which could be sentimental, but somehow isn’t.
The program quotes this letter from 1940, from a 23 year old pilot to his sweetheart:
“Darling, you’ll make me easier in mind if you’ll promise this – until we’re married, if I should be unlucky enough to go up as ‘missing’, don’t wait too long. If anything happens to me, I’ll want you to go and have a perm, do up the face, put the hat on and carry on. It’ll take a lot of guts but I know you’ll tackle it in the right way.”
He was killed a month later. 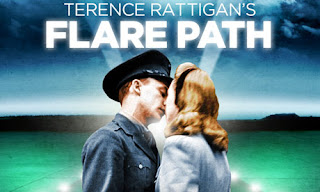 ‘Flare Path’ has its moments. I won’t give away the plot, but I will tell you that it does end happily. I also add that I was in floods of tears. Always a sign of a good night at the theatre, I think.
Most of the performances were superb. The director was Trevor Nunn, who appears to be very eminent – he was the longest-serving director of the Royal Shakespeare Company from 1968 – 1986. Well done on this one, Trev. My personal favourite amongst the cast was probably Sheridan Smith playing Doris, the erstwhile barmaid-turned Countess. Harry Hadden-Paton as Teddy was also excellent. The only one I thought was really quite weak was Sienna Miller as Patricia. The character is, admittedly, quite an unsympathetic one, but she was played quite uninspiringly. This reviewer agrees: "Miller isn't really up to scratch, her lack of nuance a poor fit for Rattigan's implied meanings and spare, ultra-distilled dialogue."
And - I think I should mention this, since I commented on Casey Donovan’s weight in my post on ‘The Sapphires’ – Sienna Miller is scarily thin. The woman is a bare stick. I found it painfully distracting to look at her. This can’t be healthy. Or is it just me?
The Guardian  liked the play too. Its reviewer says that “in one sense, Rattigan’s plays are an attack on the English vice of emotional containment.” As to that, I’ll have to see some more to comment. There was a large helping of said emotional containment in ‘Flare Path’, but I didn’t get the sense that Rattigan was ‘attacking’ it. In fact, everyone seems rather proud of their stiff upper lips. The reviewer goes on to tell us that “it is precisely that embarrassed emotional hesitancy that makes this play so overwhelmingly moving.” Even Winston Churchill himself took this line. He emerged from his wartime bunker in January 1943 for a rare trip to the theatre. Afterwards Churchill told the cast: “I was very moved by this play. It is a masterpiece of understatement. But we are rather good at that, aren’t we?” Which may, actually, qualify as an overstatement.
But if this play can make me cry in 2011, is must have been unbearably moving in 1943. It is a great play, and I am very grateful to have discovered Terence Rattigan.
http://www.guardian.co.uk/stage/2011/mar/15/flare-path-sienna-miller
http://www.guardian.co.uk/extra/2011/feb/23/flare-path-haymarket
http://www.timeout.com/london/theatre/event/213907/flare-path
Posted by Annette Freeman at 8:43 PM

Email ThisBlogThis!Share to TwitterShare to FacebookShare to Pinterest
Labels: Theatre